The work that will form the bulk of the Travelling Trainer Job will be in relation to the safety drills and implementation of new procedures on board.  There is a slow but constant shift going on in the cruise industry and that is mostly due to the fact that more electronic support is becoming available. The old paper log book has disappeared and instead the assistant of the Watch is now typing directly what is needed into an Electronic file; which we call an E- log.  The same is the case for fire fighting. We are moving away from the safety plan under a Perspex plate (so we can draw on it) to a large screen that displays everything digitally.  The challenge for all of us in the Industry is to manage this process in the most effective way possible.

Let’s answer the question first: Do we Need a checklist? The answer is yes. The bridge equipment has become so extensive and the procedures so elaborate that an operator, read officer, cannot remember it all anymore. Mistakes will be made an in emergency, a mistake in a matter of life and death.  The first Industry which realized this was the Airline Industry.  Here electronics became much earlier a standard part of the operation and it was very early on recognized that the only way to avoid mistakes was to introduce standard procedures to ensure that nothing was forgotten. 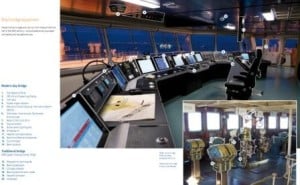 Picture courtesy: Konigsberg Maritime. A modern Bridge of 2012 and the inset is the Bridge of the Queen Mary of 1936 with very little change until 1967, when she left service.

The maritime Industry only embraced this much later and that was partly due to the fact that in the beginning the presence of electronic gadgets was very minimal. The first GPS only appeared on the ships in the mid 80’s. Most ships still extensively used a sextant, the magnetic compass was a necessary backup of the Gyro compass and with a echo sounder and sometimes a Decca Navigator or a Loran A or C most equipment was accounted for. There was Radar of course but the quality was not that great compared to the current digital world. Another reason was the reduction in navigators on the bridge. With the arrival of better fire detection systems, the bridge manning was slowly but steadily reduced. The “back-up” disappeared which could act as a safety net during an emergency situation.

The first checklist appeared on the Holland America Line ships in 1990. I remember it well as yours truly was the designer. We had a Compliance Director in the company who had come from the USCG where checklists had already been embraced.  Thus, as a good practice, it was also introduced on the HAL ships. In the beginning each ship did their own thing but slowly but steadily the company brought some structure into it all. Then came the implementation of the Safety Management System, which required a structural approach for each shipping company to the way the ships were operated. With the arrival of the Intranet, it became possible to store everything on line and download whatever was needed on board. If changes were submitted by a ship, it would be reviewed ashore and if approved entered into the database. Each ship could so benefit from this improvement and everything remained standard.

After 2000 we saw a fast increase in the amount of electronics on the bridge, with a shift from stand alone machines to completely integrated systems.  The systems were now so far developed that they started to replace all the manual routines that were normal in the past. Airline, Maritime and the war industry were all borrowing ideas from each other and getting inspired by each other and that meant more and more gadgets to assist in the bridge operation process.

More gadgets mean that more information is being thrown at the person on the bridge and the checklist has now become a necessary tool to assist in managing that large inflow of data. The days that each company had its own procedures and own systems, is nearly gone. The new electronic equipment is so expensive to develop that most company’s now buy the same, or have something similar.  That means that the bridge routines becomes similar and means that the checklists become similar.

Carnival Corporation has recognized that and decided to introduce  a form of standardization for all the Brands under its umbrella and so the Corporate Checklist arrived.