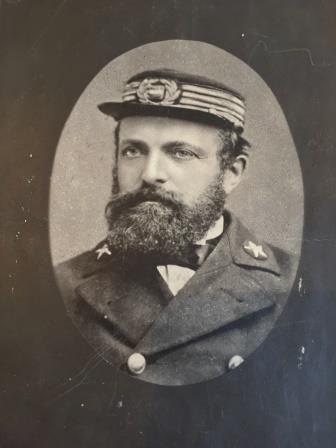 Born in Zierikzee, in the southwest of the Netherlands on 12 July 1843.  He married on 31 March 1875 Margrietha van Schelven and as far as is known there were seven children.  One of his sons Willem also went to sea.  He also joined Holland America in 1896 but left as chief officer in 1908. (We think to work as an independent Master with his own ship)

He obtained his 2nd mate’s license on 27 May 1865, which included all practical and theoretical parts of a navigator’s job but excluded anything to do with steam machinery.  He was then employed by the Netherlands Steamboat Company who sailed to Gravesend /port of London. OnTuesday, Friday and Sunday a ship left from Rotterdam and then returned from London 4 days later.  The regulating body “Trinity house” issued him as Mate a one year’s pilot’s exemption certificate on 14th of March 1877 for the Thames, sailing from Gravesend via the Princess Channel to the Open Sea. These exemptions were only issued to Captains and navigators who sailed in and out of the area with great frequency. Which is still done to the current day. At that time he was serving on a ship called the Feijenoord which had a draft of 11 feet. The NSC owned at that time three other ships (at least on the London service) called the Batavia, Holland and the Maastroom. Each about 500 tons in size and so fairly small. With these ships he was employed on a regular service between Rotterdam and London. Newspapers report that in July 1880 he was in command of the Maasstroom.

The ss Nederlander (The “Dutchman”) built for own account by the shipbuilding company which belonged to the Holland Steamboat Company (Hollandsche Stoomboot Maatschappij) The ship made three voyagens between Rotterdam and Baltimore and went then in charter for the NASM.

In April 1881 it is announced that a consortium of businessmen and bankers are planning to open a monthly service to Baltimore with two ships. These were to be newly built ships and the first one was the ss Nederlander (translates in the Netherlander or Dutchman) sailing for the NSC with in command Captain Slierendregt. By the 18th. of Aug. 1881, the ship had made its trial trips and was ready for loading cargo in Rotterdam. By 23rd of Sept. it was on its return voyage from Baltimore back to Rotterdam.

Then on the 28th. Of Aug. 1882 the consortium who owned the ship decided to charter the ship to the NASM with the option to buy after four years. The NSC remained a participant in this company but the new company was to provide everything including the crew. (A so called Bare-boat charter)  Captain Pieter Slierendregt remained with the ship and thus joined the NASM as captain. He had made three voyages to Baltimore with the ship. On 11 September 1882 he is assigned as Captain to the Leerdam (I) at a salary of first fl 200,– a month which was later raised to fl 250,– a month. The ship was then brand new and he was in command during the first voyage.

The ss Leerdam (I) in HAL colours. This photo is from later in her career when the NASM had made to changes to her superstructure.

Somewhere around this time the ship is renamed to ss Leerdam. Most sources give September 1 but newspapers report that this name was already in use in May.

As the board of Directors had advised the town of Leerdam (located in the centre of the Netherlands) about the fact that they were naming a ship after the town, the town councilors responded with sending an expensive hand embroidered flag (cost fl 450,–) This flag was handed over by the ladies who made it to Captain Slierendregt in Rotterdam before the maiden voyage commenced. It was kept in a wooden box and it was flown for the first time officially on arrival New York.

The binoculars given by the King of Schweden (a)

On 6th. of May the Captain and his ship saves the lives of the occupants of the Norwegian Barque Inga Capt. Cornelissen) with on Board 12 men, the captain and his wife while on a crossing to New York. The Inga had been hit by a whale on the 30th. of April while on a voyage from Greenock. The ss Leerdam was maneuvered close to the sinking vessel and a boat was launched in command of 2nd officer Potjer who was able with ropes to pull them all off the wreck and into the lifeboat. 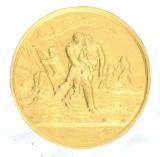 Upon return to the Netherlands the Captain and crew involved are rewarded by the King of Sweden and Norway.  The captain receives a pair of binoculars, Mr. Potjer a gold watch and the rowers of the lifeboat: JJ Buern, F Toppen, J. Bleek, Ohle Erichse, F Fangborg and J van der Mee each a silver watch. The captain also reeives the “small” gold medal from the Dutch Lifesaving Society.

For this heroic piece of seamanship the captain received the Robin price in 1884, which seems to have been a monetary price of 50 guilders of a quarter month salary for a ship’s captain.

In March 1884 while in command of the Leerdam he managed to bring the ship back to Rotterdam with great difficulty after it lost its rudder in the storm and having had to construct and rig up a jury rudder twice.  They had left New York on the 25th. of February and were on the way to Amsterdam when three days later in the evening a very strong bump was felt. Strong enough to break several portholes, made glasses jump out of their storm racks and a wall panel in the main salon was torn from the bulkhead. Then it took them 38 days in various weather and with rigging two jury rudders, to make it safely to Rotterdam.

The P. Caland (Capt. F. Bonjer) had remained in the vicinity while the jury rudder was made but continued the voyage when it was seen that the contraption indeed worked. Also and English steamer the Lord Gough (Capt. M.Hughes) had remained on standby during the first night until things had settled down. Then an attempt is made by the ss Californian to make fast and tow the ss Leerdam. However 4 steel wires break in succession and the Californian continues its voyage. As the jury rudder works, the captain refuses any other help. The ship then calls at Falmouth for coals and finally makes it to Rotterdam on 03th. Of April, escorted by two tugboats. The whole voyage had lasted 43 days of which 38 days without a rudder and mostly during very bad North Atlantic weather. The ship returned to service in the next month.

A nice piece of news was the donation by the caption of a Falcon to the Rotterdam Zoo “Diergaarde”. It was in those days a sort of service from captains and other crew on board the ships to bring exotic animals from the countries visited during the voyage or what ended up on deck as was the case with the Falcon.  (More exotic donations where Jackals from Africa and snakes from the same continent)

During the crossing of the Leerdam to New York in February 1887 the captain passed away from what was described in the New York Times as “a heart disease”. The ship had been 6 days out and the captain fell ill on the bridge.

He was carried to his room where he died 10 minutes later on 11 Feb. 1887. The Chief Officer, Mr. Ponsen, took command and brought the ship to New York.  It was the intention to return the body of the captain back to Holland, however this did not happen. Instead he was buried in the New York Bay Cemetery on 24 Feb. 1887. Present was the General Manager Van der Toorn, the Dutch Consul, Ships Agent and the chief officer (acting Captain) Mr. Ponsen together with a larger number of the crew and several Brothers of the Local Free Mason chapter to which the Captain had belonged.  His coffin was covered with the Ship’s flag (The one donated by the town of Leerdam). The burial rites were according to the Masonic rites.  The Free Mason local chapter paid for the grave and the company paid for the head stone. He was 43 years old and had been in employ of the NASM for 5 years. He left behind a wife and seven children in Rotterdam. He sailed for the company a total of 5 years and passed away on the 63rd. crossing.

The crossing of the ship had been a difficult one and the ship had to go into dry dock in New york. It is unclear whether the 2 were related.

The inscription on the Tombstone:

During the voyage to New – York

By life commander of the ss Leerdam