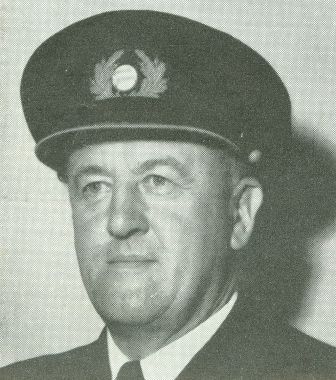 Captain Han Lohr from a photo taken around 1950 (c)

Captain Hans Wilhelm  Löhr was born on 21 October 1895 in the German town of Elten about a mile from the Dutch border to the South East of Arnhem.   His father was  Mathias Florenz Wilhelm  Löhr (born 29 Nov. 1861at Lobith and died 26 Sep. 1900)  listed as an Engineer but had passed away by the time Hans Löhrr joined the Kweekschool. His mother was Stephanie Johanna Paulina Harloff nee Langenfeld . (Born 25. Nov. 1867) Stepfather was Gerard Theodoor Harloff listed as a Farmer at “Huize Dalwaarde” in the town of Balkburg (a hamlet near Dedemsvaart in the East of the Netherlands). It is he who signs the Articles of Acceptance for his stepson at the Maritime Academy.

Hans Löhr was accepted by the “Kweekschool voor de Zeevaart”, the Maritime academy in Amsterdam”  on 17 September 1913. He enrols in the two year course which means he had at least 3 years of secondary schooling including Mathematics and Physics. 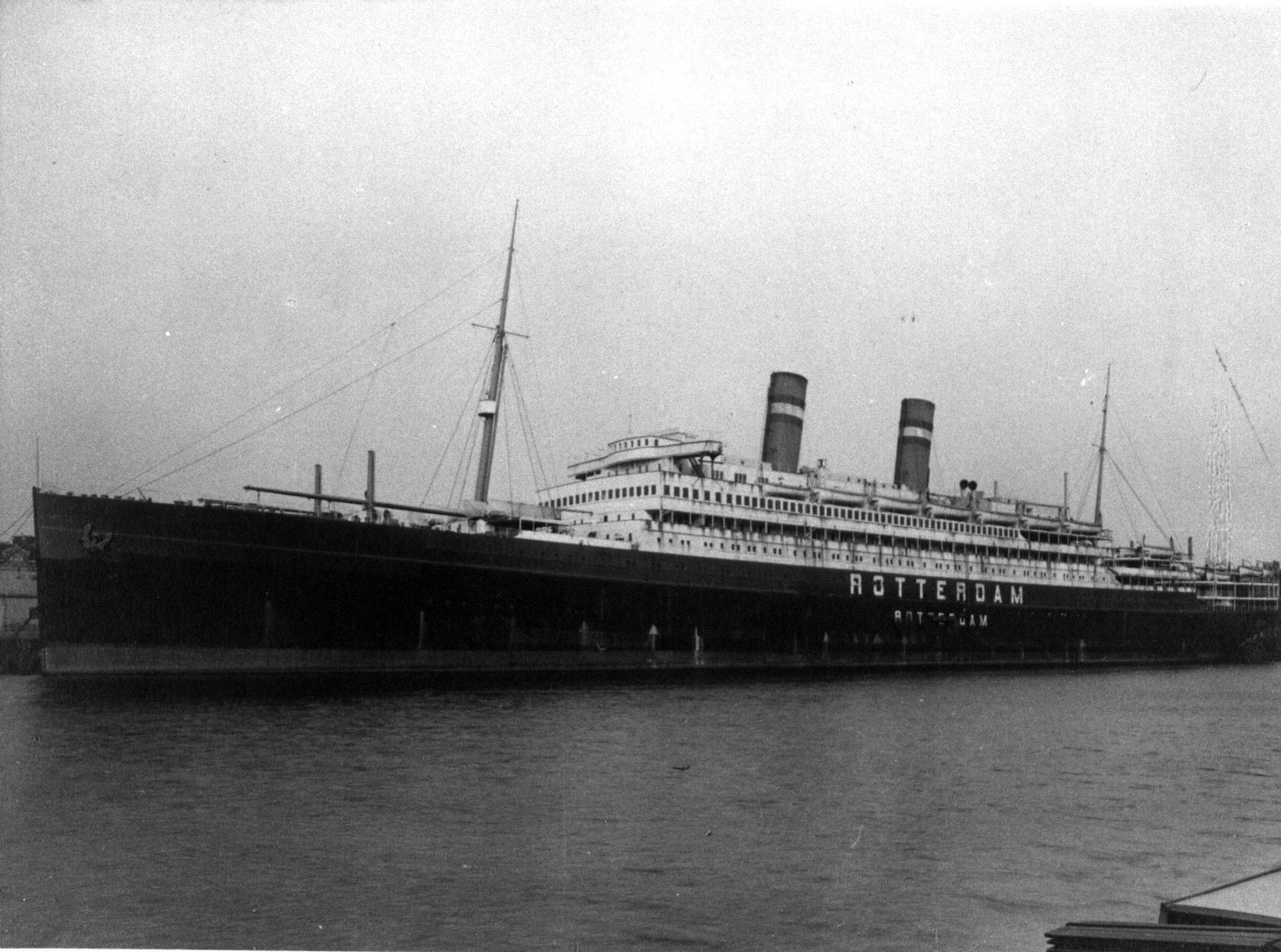 The ss Rotterdam (IV) on a 1915 photo.  This is the way cadet Löhr would have seen the ship with neutral letters of ships name ad home port on the side. As the Kingdom of the Netherlands was neutral, the idea was that a U boat commander would first read the name on the side of the ship before pulling the trigger. In reality that did not always work out that way and for that reason the ship was laid up later in the war and thus survived. (b)

On 03 August 1915 he is placed on board the ss Rotterdam as cadet. Which serves on the Express route between Rotterdam and New York.  He returns to school on 02 September 1916 to finish his education but fails his exams in December and thus returns to sea as an acting 4th. Officer. He passes his 3rd mate exam on 17 July 1917 and is dismissed from the Academy on 13 September 1917.  His school marks indicate that he was no the greatest of his class. But on the reports of the “Kweekschool” his highest marks were for languages and “weapon handling” (shooting and fencing). Which marks were a lot higher than that of his compatriots but only made up a small part of the training. As a result he passes out as nbr. 69 of a class of 72. This did not deter Holland America from hiring him as a cadet or taken him back as a 4th. officer. Holland America has always been a company where loyalty and being “there from the beginning” with the company was considered much more important than being the top flyer of the school. 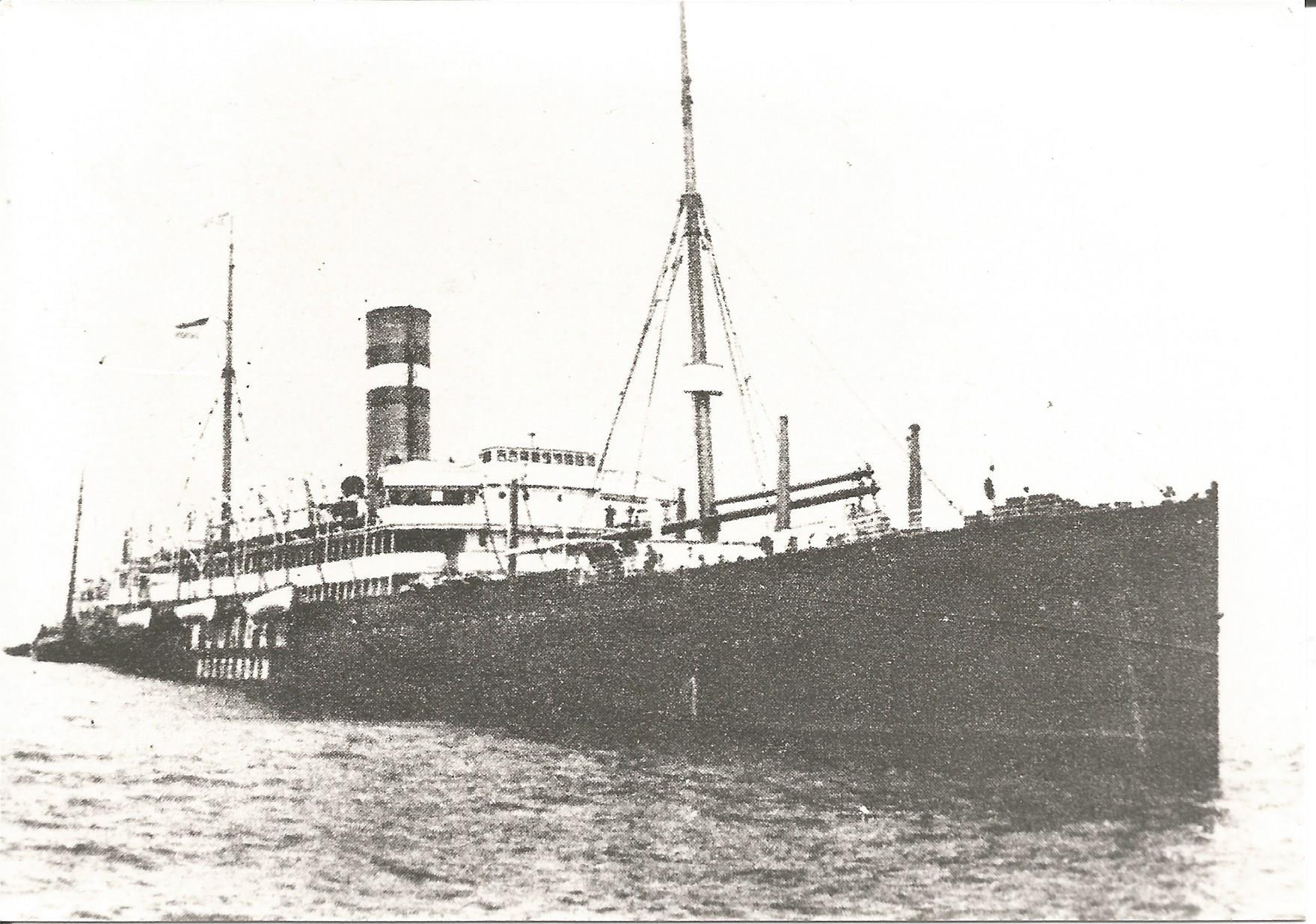 The ss Noordam (I) on 03 Aug. 1917.  On this date the ship hit a mine but was refloated and towed to Rotterdam for repairs. 2nd officer Löhr joined the ship after it arrived at the ship yard for repairs. (b)

Between 1917 and 1920 he sails on a mixture of cargo and passenger ships, and he was on board when the ss Noordam (I) made a charter voyage in July 1918 to the Dutch East Indies as part of a Civil Servant exchange who had completed their 5 year tour of duty. The Noordam was not really suitable for the Tropical Weather and a lot of sickness developed on board. To make the trip possible there was a 2nd ship to carry the coal for the Noordam and a warship to protect it.  The Dutch Government was almost voted out of office because of this, as nobody saw much reason while in times of war so much expense should be made for a civil servant exchange while they were perfectly safe in Holland and in Batavia. But being on board and away from the north Atlantic must have been a very interesting experience.

After a year on the ss Moerdijk (I) he returns home and marries on 26 October 1920 Louise Sophia Albertina Kleinschmidt a German school teacher (Born 01 May 1889 Oslebhausen Germany). Eventually there were two  sons children Hans Harro, (Born 07 Aug. 1922)  and Bedo Dieter (Born 07 Aug.1926). They divorce after the war on 28 December 1946 in Amsterdam. He was at that time noted as living in The Hague.

(ED: I have not been able to find a descendant of Captain  Löhr, hence the personal life of him is still to be further researched. What I have been able to find comes from the War Records and the help of Mr. Kruidhof (d). Any family who can help with some personal information and photos ? )

Then his career continues and what is peculiar compared to his colleagues is the number of ships he sails on until he reaches seniority in the rank of  2nd Officer and is assigned to the Flagship ss Rotterdam (IV) where he remains for  2 years until he is promoted to Chief Officer.  He sails as 2nd officer from 1921 to 1935 which is a very long time, but caused by the economic issues in 1920’s and the depression in the 1930’s. Still he was kept in service and not let go as many others were as the ships were in lay-up. As with all who remained in service the wages had to be reduced and this was done mainly by paying “a rank less” e.g. a 2nd officer was paid a 3rd officer wage and a Chief Officer was paid an 2nd officer wage. 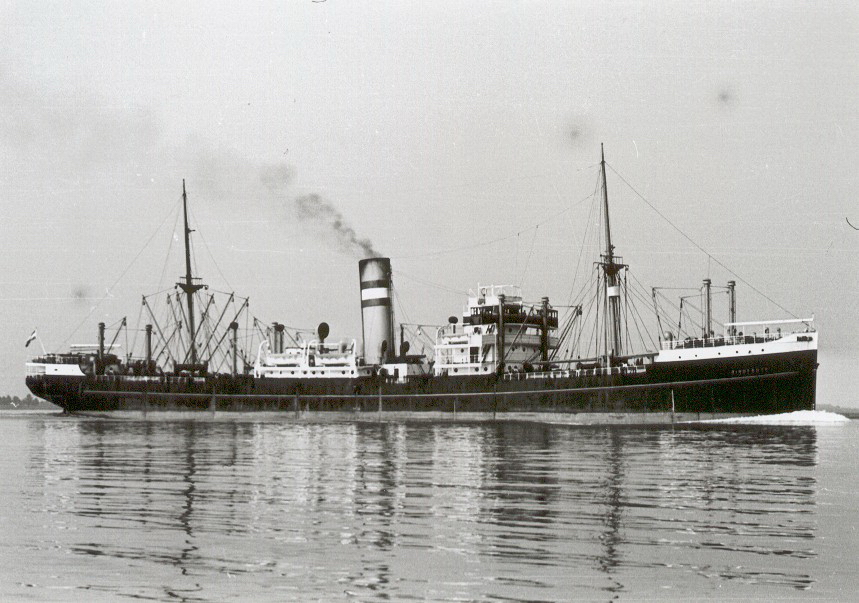 Thee ss Binnendyk, was one of 10 B class cargo ships given to  Holland America as repayment for the sinking of the Statendam (II) in 1917 when she sailed as the troopship ss Justicia for the British Government. (b)

In 1936 the economy started to pick up again and he was assigned to the cargoship ss Binnendijk as Chief Officer. He will remain in that function until 23 January 1943 when he is promoted to captain. 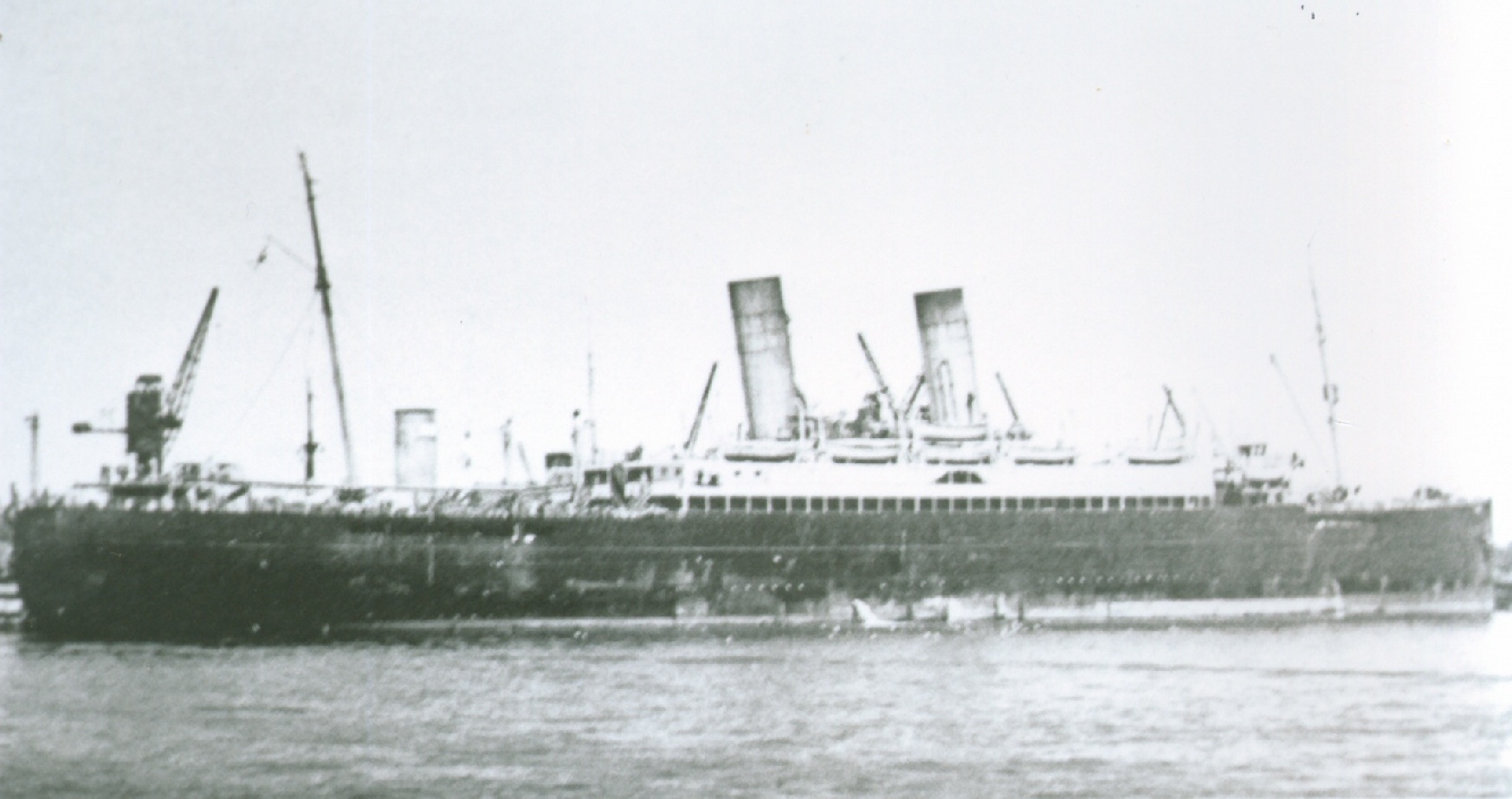 The ss Westernland in war colours. She had come to Holland America when the company bought the Red Star Line in 1938. (b)

In the meantime  he wa s on board the ss Westernland when the war broke out on 10 May 1940 and the whole HAL fleet was assigned to war work. The Westernland was involved in troop transports and was chosen to carry General de Gaulle and his army to Dakar. The idea was that if the French would liberate or protect their own colonies there, that it would be much more difficult for the Germans to invade this area. If they would succeed then submarine ports could be opened which would greatly endanger the supply routes to Great Britain coming from around the Cape. Operation “Menace” was organised and on 31 August the Westernland together with her sister the Pennland together with four more troopships and other vessel carrying 4370 British and 3670 French military. 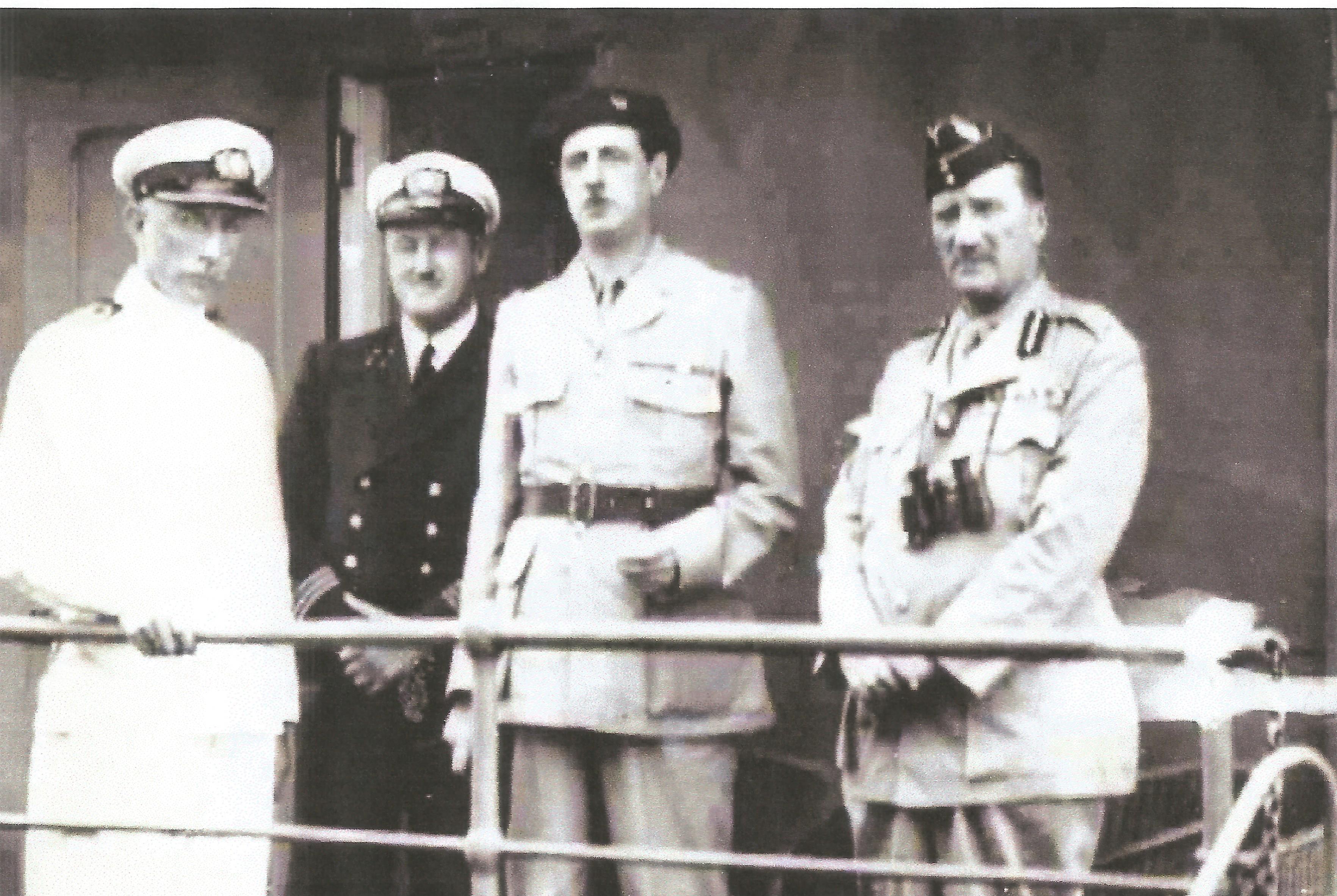 On board ss Westernland on the way to Dakar. From left to right Captain Lagaay Sr. the Master of the ss Westernland. Chief Officer Hans Löhr. General de Gaulle of the Free French and General spears of the British part of the operation. (b)

It had shown in the mean time that French only troops might not be sufficient in number to control the whole area, so the British were send as backup.  On 22 September an attempt was made to land the troop but the French under Vichy command (which collaborated with the Germans to keep half of France and the colonies clear of the Germans) refused to take the side of DeGaulle. A sea and air battle was the result with damage on both sides and the Fleet retreated.

Then promotion came and no ship. The company needed a new captain as Captain Libau was going on leave and those who should have been available were stuck in occupied Holland. Shortly after he was assigned to the cargo ship the ss Philips Wouwerman. This ship did not have a DYK name as it was not owned by the company but by the Dutch Government. They followed a naming process based on Dutch historical peoples and Wouwerman was an 17th. century painter specializing in hunting landscapes and battle scenes. Holland America had just taken on the management and Captain Löhr was its first master under the Dutch flag.  He remains with the ship for year  and makes voyages from Liverpool to Freetown in Africa. In May 1944 he is relieved at Belfast by Captain Boschoff and transfers to another Liberty ship the Fort Orange to relieve Captain Visser who was promoted to a more senior ship the ss Edam (IV). 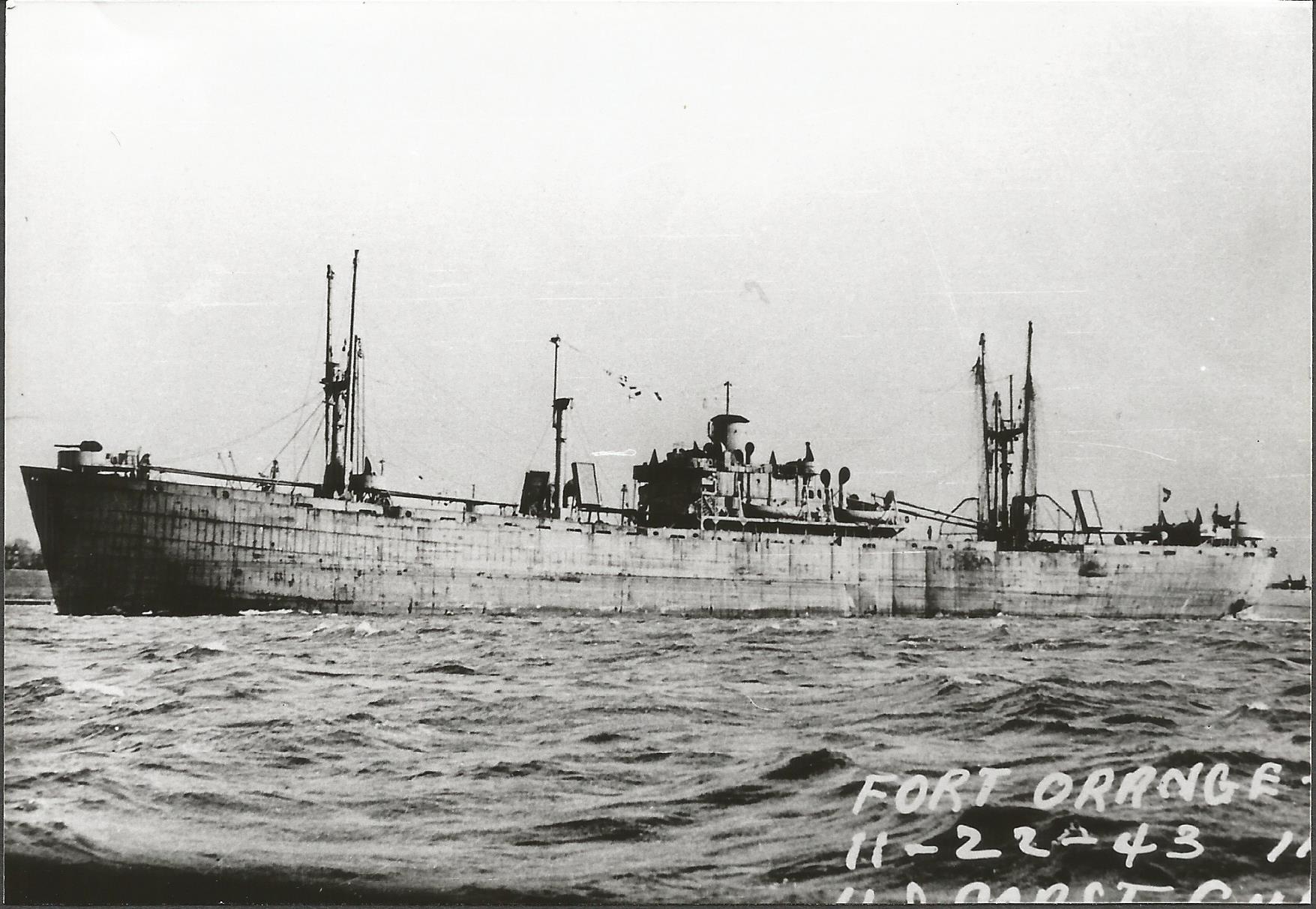 The ss Fort Orange one of more than 2000 Liberty ships churned by American shipyards during World War II. this photo was taken a month after the ship was handed over to Holland America. Captain Lohr joined in May 1944. (b)

The ss Fort Orange was another Liberty Ship which had been arranged by the Dutch Government to replace sunken tonnage and was given to Holland America in 1943 who eventually bought the ship and renamed it in Blijdendyk (II) in 1947. He remains with this ship for just under a year and then the war is over. He makes one more contract as Captain on the ss Blommersdijk (II) until December 1945 and is then relieved in Montreal by a much more senior captain who had been stuck in the Netherlands for the war years.

After leave he then sails again as Chief Officer (subject to verification) before promoted to captain again in 1947. By that time Holland America had embarked on an aggressive ship buying scheme which eventually resulted in adding 11 A class ships to the fleet. And between 1947 and 1950 he mainly sails on these ships. 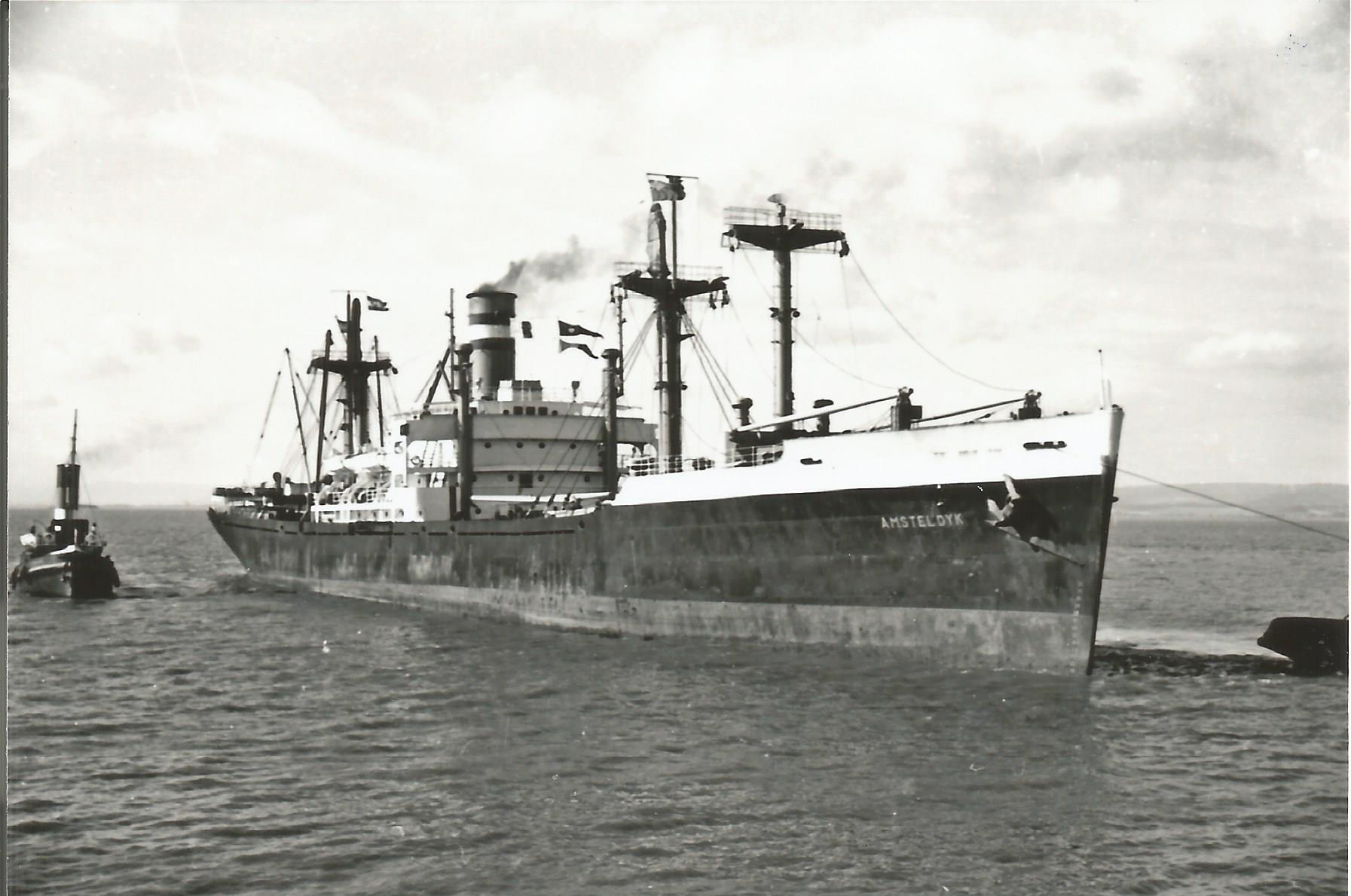 The ss Amsteldyk. A Victory Class ship of which Holland America bought 10 in a very short period. looking at the tugboats, this seems to be an arrival in a British port. (b)

Narration to to be continued

Captain Löhr retires on 31 October 1955 having reached the mandatory retirement age of 60.  As far as is known he settles down in New York and passes away on29 November 1967. His wife passed away on  22 February 1975. Both were buried at the General Cemetery in Rozendaal, the Netherlands.

Port duty, ship in lay up

Note: Personnel records after this date are not accessible. Hence until Sep. 1938 there might be other ships in between.