In the past we had to travel through a bridge to get to our dock at the World Trade Centre. I assume because everybody got fed up with having to wait for this bridge being open all the time, they decided to give the older port area its own entrance. When the new port area was under developed it did not matter that much as hardly anybody had to go over the bridge but when the cruises ships started to dock there, the waiting times became very inconvenient. Now the ferries and the smaller cruise ships, plus the fishery traffic and the traffic for the dry docks have their own entrance, relieving the pressure on the bridge considerably. 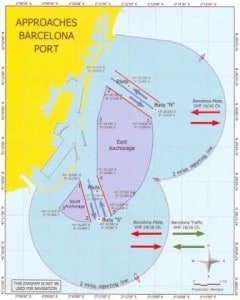 Thus there are two harbour entrances now, one covered by the November buoy (N for North) and one by the Sierra buoy (with the S of South) The funny thing is that the November buoy disappeared from location awhile ago and has thus far not been replaced. However Port Control and the pilots keep referring to what is now an imaginary buoy and location. If you have not been to the North entrance it means that you have to consult the chart to figure out what this November buoy point is. However we have been there before and we complied with the rules and came down to 10 knots to board the pilot 2 miles north of the imaginary November buoy in the inbound Vessel Traffic Lane. 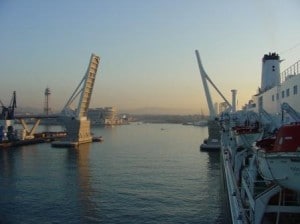 The bridge entrance as seen from the old Noordam. When going through the ship had to be exactly in the middle of the fairway to avoid touching the bridge.

As the port entrance is meant for ships that are not so big, it is not very wide and you need to make quite a sharp turn to the North to line up properly and sail in. From there it is only a mile to the dock, of which half is taken up by the turning basin. So we swung around in that basin and docked nose out along the terminal. The shore gangway was broken (A sort of airport type telescopic thing) and thus we had to use our own gangway. Which is a much easier anyway for the guests as our gangway lands on ground level and you do not need to use lifts or escalators. Also it meant I could park the Prinsendam where it worked best for the mooring lines to create the safest docking.

The other cruise ships (Island Escape, Sovereign and Costa Pacifica) where all at the new docks and their guests needed a taxi or a shuttle to get to down town. Our guests could just walk into town. Sometimes it really pays to be on a smaller ship. My morning was taken up with crew inspections and an introduction to the crew about a training class in cultural awareness. We call this the RESPECT DVD and it is shown to all the crew in the fleet. With the fast changing world, we get more and more crew from different nationalities and different cultures. That means different beliefs, different attitudes and different styles of living. Thus the company has put together a DVD to focus the new boarding crew on that we have only one culture here; the HAL culture.

We have very few issues in Holland America Line with crew not behaving or not having respect for each other, but when you are new, what do you know??? You think what is normal at home is also normal on the ship. But the perceptions and idea’s of somebody from New York are very much different to somebody from Bali or Manila. To get this across we have the Respect DVD. The company wants that a staff officer does the introduction when the DVD is shown and as it pertains to crew from all three departments I think it is the best thing that the captain does it himself. Thus on a regular basis I give a little speech about the wonderful world we live in and how to keep it that way.

Barcelona turned out to be an overcast day but not cold, so perfect weather for shopping and sightseeing. We left at 8 pm in the evening and our next port of call is Cadiz, the day after tomorrow. To get there we have to sail through the strait of Gibraltar tomorrow evening. The weather is holding so we should have another good day at sea.

To access Captain Albert’s historical writings on Holland America Line as well as photos and additional information about Prinsendam and his sailing schedule, click here.