The weather turned out to be beautiful indeed and that made approaching Marseilles very pleasant. The wind had died off completely and the sun was shining straight over the hills making the area look very “Mediterranean”. It was an active port day as far as traffic was concerned with the Prinsendam leading the parade. We were followed by the Coral (Lois Cruise Lines) The Costa Pacifica (Costa Cruises) and the Bleu de France (latest off-shoot of Carnival to get it into the French market). For the rest there was a whole line of ferries coming in as well about an hour later.

The entrance to the new port of Marseilles is at angle of about 90o with the approach course and only 100 meters wide. Thus there is about 110 feet clearance on either side when the Prinsendam enters in the middle. With nice weather not much of a problem but when the wind blows on right angles over the entrance, it is a tight hole to get through with a drifting ship. On our approach we were listening with amazement to the Coral who was about 10 miles behind us and was giving a pilot time of 5 minutes before us. Somehow the mathematics were not correct here, because there was no way that the ship could over take us with only 20 minutes to go. So it did not happen at all but the pilot going to the Coral had difficulty boarding as the Coral was still going much too fast when she was almost at the pilot station. So while the Coral pilot tried to sort that out we proceeded into the port with our own pilot and a nice and sedate speed. 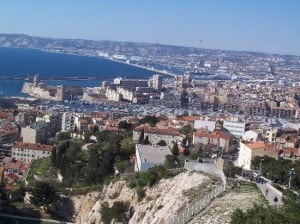 le-vieux-port The new port in the distance

As soon as we were docked the Costa Pacifica came in and docked just ahead of us. The new docks, or port Noveau in Marseilles is split up in four parts. The ferry part, a cargo part, and then docks that can be used for cruise ships, container ships or self unloading ships. (Ships with cranes) With cruising now being so popular the docks in part 4 are almost permanently in use by the cruise ships. Today was a “quiet” day according to the pilot. Tomorrow there were seven cruise ships planned and all coming in, in a two hour time frame. 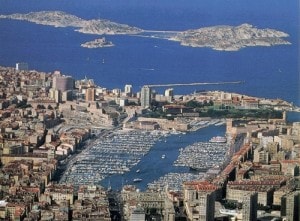 vieux_port_20 The Old Port of Marseilles.

There is also the old port, or Vieux Port which is right in the city centre. It is now only used for yachts and sailing boats and the areas around it are full with hotels, restaurants and shops. Unfortunately as it was Sunday the shops were are all closed so for the guests not on tour it was a very quiet day. I was not happy either as there is a very nice maritime book shop there, that always has the latest French publications on passenger ships available. I like to pick them up over there, as internet ordering from French websites has it challenges. Plus you can look the books over first, instead of buying blind by mail. As it was closed I had to save my credit card for a future call. There is also a small Maritime Museum in the old Hotel de Ville with some beautiful models including a 20 feet (?) long Normandy model that is really worthwhile to have a look at.

From Marseilles to Barcelona it is not that far, and in the past I used to go sightseeing along the port boundary towards the castles and fortresses on the SE side of Marseilles. However since a few years, it is required to have a pilot onboard to do so, which is not a problem but then you have to sail all the way back to disembark him again. The pilot boat cannot pick the pilot up at the old side of the port. That costs too much time and so I had to forgo that.

We pulled out just before 6 pm. After all the day tours (to the Provence and the Lavender fields) were back onboard. Tomorrow we are in Barcelona and after a little begging from my side, the agent managed to arrange it that the Prinsendam is docking downtown at the World Trade Centre instead of at the new passenger terminals which are much further out. From the WTC you can walk directly into the town or pick the cable car up the mountain. This saves the money for the city shuttle bus system and the 20 minutes lost either way. So I feel that I have done my good deed for Barcelona. The weather for tomorrow is supposed to be overcast but with temperatures in the low 70’s so that should be perfect for sightseeing.

To access Captain Albert’s historical writings on Holland America Line as well as photos and additional information about Prinsendam and his sailing schedule, click here.