So today was the big day. Although we could not do everything that was supposed to happen. A flag raising ceremony was planned with everybody being present on the Sea View deck aft, where you can see the Flag pole, but the deck had not been cleaned yet and work was still on going with the Glass Stairs. So it meant that the amount of “everybody” had to be reduced to the senior office people and the ships officers. That worked and the Italian flag came down and the Dutch flag went up. Hence it was hard for me to get some good photos but here is the flag hanging. 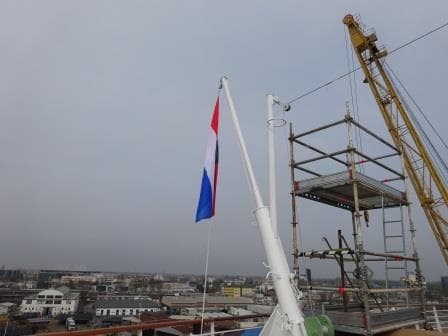 Here we are Holland Glory on top.

Thus what nobody saw wis the installation of the Builders plate with the shipyard name and the builder’s number of the ms Koningsdam. It is hanging on the Sb. side Lido deck a much more prominent place than is the case on some other ships.  Here at least the majority of our guests will be able to see the plate and see where the ship was built. 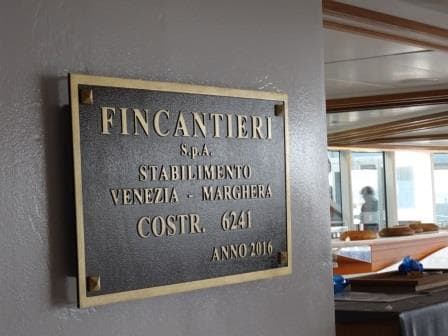 Soon as the flag was up work continued in a frenzy as there is still a lot of cleaning up to do. I have not posted any photos yet from the Crow’s nest and the Children’s playroom. Main reason is the fact of the furniture not having been delivered but which is taking place at the moment. Although Holland America does not tend to have that many children on board, except with Thanksgiving and Christmas but those who will sail with us will enjoy it. It is a large area split up in toddlers, teens and tweens and each as an outside deck area as well, screened off from the rest of the ship. The parents can be very happy. My experience is with Club Hal and the kids is for the first day; they are reluctant to go but as soon as they are there, you cannot get them out again. Much to the upset of the parents who want to take “little Johnny” to dinner in the evening and little Johnny much more prefers to eat pizza with the rest and create mayhem behind the Club HAL door. But it is the first step in creating a platform which will bring little Johnny back when he has become a Big John. 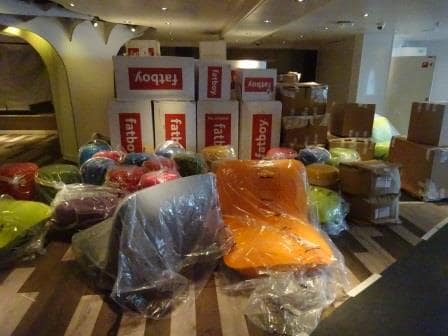 Kiddie Furniture arriving and being installed.

The ship is now really gearing up for the start of our cruising life but first we have to get through the all the formalities of being a new ship. Tomorrow around 4000 guests are  expected, invitee’s of the shipyard. I wonder if we will be able to cope with the amount of cookies as the Grand Dutch Café has now opened for business and there are a lot of nice cookies and pastries on display which can be had free of charge. They also have Dutch “drop” or liquorice which of course has to be paid for. 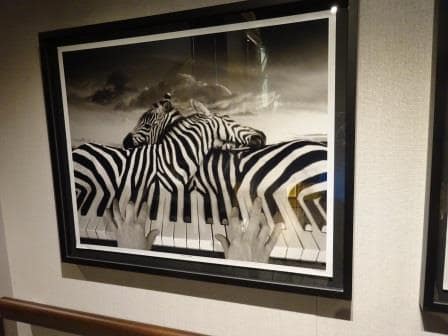 Another piece Art and this one really attracts me as I find it really clever what the artist did. Transforming piano keys into zebras

Today was also the last day of the pre sailing audits which the ship had to go through and the Captain is now a happy man as all the certificates, which will enable him to sail, are being issued now. A funny part of this inspection was that these Auditors were being audited themselves. Lloyds carries out all the ships inspections on behalf of the Dutch Government and the Flag State has to ensure Lloyds is carrying out the inspections according to the standards set by the Flag State.  The question now remains, who audits the auditors who audited the auditors?? 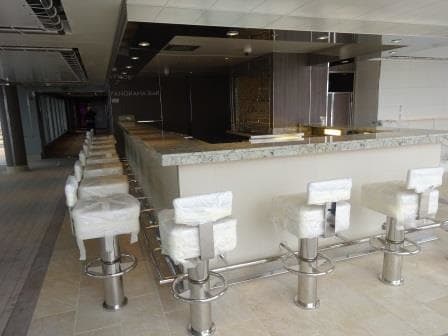 Panorama Bar. Not a bad spot to watch a movie from in the evening on the big screen.

This is the first ship of the fleet where we have a double level Lido Deck. Lower level is around the pool and the up upper level is a sort of balcony overhang with white leather benches. This means we also have two Lido bars now and the upper level the Panorama Bar appeared today from behind all the protection. It is located on the starboard side deck 10 and the regular lido bar is on deck 09 port side. 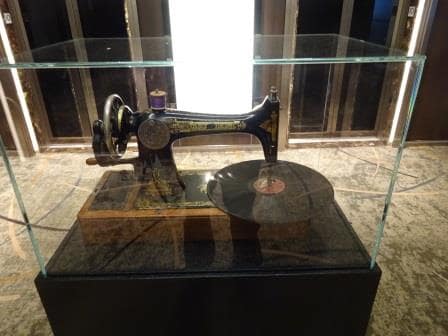 If you still have a old sewing machine and an old record, then you can make your own art.

Not all that is going on is hard work. Tonight there will be a party for all the officers to thank them for their hard work and tomorrow there will be a similar one for all the crew and for that purpose the yard has hired a public area down the road from the yard and they will throw a party organized by Heineken.  Most crew has been working long and irregular hours in the last days to get the ship ready. Often irregular hours as they had to work around the activities of the yard. So a thank you is appropriate and no doubt a free drink will be appreciated.