Today and tomorrow we will be visiting ports that are tucked away deep at the end of a fjord. That gives the meaning of “approach” a whole different dimension as the arrival of the port is preceded by some very scenic cruising towards the dock. For the early morning arrival, there are normally not that many guests out and about, except for a few diehards that I see every morning but on departure the outside decks will be full when we retrace our steps again to open sea. The weather forecast predicted a gloomy day but when we started to make our approach we could see the sun already trying to peep through so once again the prediction was wrong, whoever it was wrong to our benefit. The town of Isafjordur is located on a shelf of land that sticks out into the fjord. Behind it is a large and deep bay with several docks all dedicated to the fishing industry.
The entrance channel towards these docks is only 60 meters wide and thus there is great reluctance by the port authorities to let us go there. They have asked for a government grant to widen the channel and then larger ships can call at Isafjordur. Until that time the largest size ship is dictated by the length of the dock located at the entrance of the port, or by its willingness to go to anchor.

Holland America holds both records for the largest ships docking. The Maasdam is the largest ship (220 meters) that ever docked in the port. Nose in and then having to back out back to open waters and the Prinsendam (200 meters) is the largest ship that manages to swing off the dock and could thus dock nose out.
As most captains do; I prefer to dock nose out, as it means that you can get away faster if something happens and you want to be back in open sea. To accomplish this, I really need wind still weather on arrival, in order to be able to swing around “on the dime”. When the swing starts, the turning basin is about 250 meters wide but when the ship is about ¾ into the swing and starts nearing the dock it is reduced to about 220 meters, leaving me less then 30 feet near the bow and 30 feet near the stern. Not much lee way when maneuvering under windy circumstances.

This morning, it was wind still and with the sun coming out it was a text book arrival. There is a pilot in Isafjordur, who also hold the distinction of being the harbour master, the waterman, the garbage collector, the immigration officer and the customs officer. That makes life really easy, as it is a one man connection for all our needs. The moment he is happy with the dock location for the ship, he puts on his customs hat and clears the ship on the spot. I wish that that was the case in other parts of the world. So under his benevolent eye, I swung the ship around and parked along the full length of the dock, which is almost the length of the ship. We normally overhang a little bit by the bow to keep the propellers in deeper water and to be able to set breast lines aft for keeping the stern alongside. If there is wind, then it funnels into the fjord and bounces off the steep mountains on either side and then you never know what can happen.

The guests had a great day in port while I kept a close watch on the weather. During the morning fog rolled into the fjord but it burned off later on in the day. A bad omen for the coming night. In the afternoon, the wind did start to breeze up once again, not forecasted and to the great amazement of the pilot. I had quite a battle on my hands to get the ship far enough off the dock to bring the nose through the wind and then sail out of the port. The westerly wind bounced off the
Mountain ridge to the east and tried to keep the ship alongside. Good news was that the wind also kept the clouds away so we had a magnificent sail away while leaving the fjord.

For the remainder of the evening, we sailed along the north coast of Iceland and I kept the ship about 4 miles from the shore, which is about the best distance to see the scenery in perspective. Sail closer and you see the tree, but not the forest as they call it.

I was off to bed once again early, in anticipation of fog. The chief officer will be on standby until just after midnight and then I do the next stretch until arrival. By 0330 we should start to enter the fjord that leads to Akureyri which is our next port of call. This time sunny weather is forecast so we will see if they got it right this time.

Note: on 2 August in the afternoon we will pass the island Jan Mayen on the way to Spitsbergen. Last year, when coming the other way, this is where we picked up our satellite signals again. So I expect that we could loose our satellite connection with the outside world when we pass Jan Mayen. This means that for the next five days, I might not be able to upload my daily blog. I expect to be back on line again on a regular basis on the 8th. of August; hopefully before. 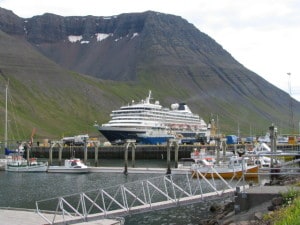