By 03.30 we started to enter the fjord. Rather early but I had set up the route from Isafjordur to Akureyri to run on average speed, to achieve optimum fuel consumption and that meant a speed of just over 12 knots. As the fjord is 26 miles deep it would take nearly three hours to get to the pilot station near the port itself. Still it is advisable here to go slow. There is the occasional fishing boat, and the occupants are not always awake plus there can be whales swimming about. As explained in one of my previous blogs, the company has protocols to avoid collisions with whales. One of those options is to change course to head the ship away from them. In a fjord that is not so easy with limited space to go, so slow speed or stopping has to do the trick. Thus the idea of charging into the fjord at full sea speed is not a good one. If then you suddenly have to put the breaks on there is a fair chance that you get a highly excited Chief engineer on the phone. The Whale experts have figured out that if the ships speed is around 10 knots the chance of hitting a whale is quite small. It seems to give them time to realize that there is a ship nearby and it also gives us time to quickly stop the ship.

Therefore, with the grand speed of 11 knots we trundled into the fjord, which is quite wide but shallow at the sides. Reason enough to stay nicely in the middle while moving towards the pilot station. Akureyri is the 2nd largest port/town/city in Iceland and has a large deep water port. Most likely the reason that they are the 2nd largest settlement on the island. As the sides of the fjord are nicely sloped, there is room for farms and also houses. Therefore this area is much sought after by people from Reykjavik to have a 2nd home or holiday retreat. Wanting to escape the hustle and bustle of the capital they drive to this most Northern part of the island from some peace and tranquility. For those who come from big cities, Reykjavik might already be an oasis of peace and quiet itself but all things are relative I suppose. 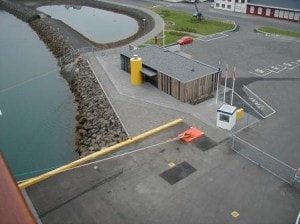 Not a very exciting picture for a cruise guest but one that makes a ships captain very happy. Strong inland bollards for breastlines that will keep the ship alongside if the wind is full on the beam.

The port has two docks that can be used for cruise ships. Last year I came into the port with a wind force 8 blowing in the back and while assigned to the cruise terminal, I could not dock there as with so much wind full on the beam, there was no way I could get the ship alongside, it being perpendicular to the wind. So I swung around and docked at the other dock, which is laying in line for the fjords general direction, while keeping the bow into the wind. Today it was wind still and that meant that I could easily come alongside the cruise terminal. By the time we were docked, the sun came out and it was a glorious day for all to enjoy. According to the pilot it was a sort of national party weekend and the town had a little fair and live music. He warned us all that we would most likely come across a lot of very happy, some of them extremely happy, local citizens. His suggestion was that a visit to the local swimming pool (thermal waters) would be a good idea as there it would be at least a bit quieter.

I stayed onboard, although I like swimming, and was more concerned about getting the Cruise Directors arctic swim organized. The idea was to do it between the shows so that as many people could participate. 21.15 hrs was decreed to be the perfect time to go over the line and thus my challenge to make it happen.

As the sun was out, sail away was spectacular; the sun shining over green rolling pastures leading up to the stark setting of the bare mountains higher up. Very impressive. From Akureyri it is one straight course to Spitsbergen and along that course line is the island of Jan Mayen were we will be around 1600 hrs. The weather forecast calls for overcast skies, very little wind and little swell. So we should have a comfortable ride and little chance of that nasty hazy stuff. 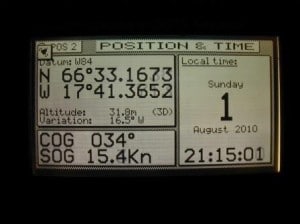 The cruise director wanted 21.15 hrs. so that is what he got. Just two cables over the dotted line. As soon as all the happy swimmers were in the pool, and there were about a 100 of them, I cranked the ship back up to the regular speed to maintain of 18 knots