Today another day at sea and it was an overcast and rainy day. As a matter a fact it was a gloomy day. We are right in the middle of a frontal system which we ran into late yesterday afternoon.  We should run out of it by tomorrow as the weather for the Cape Verdes is forecast as  sunny and in the high seventies (oF)  At the same time we are moving away from the sun and thus is gets day light later and later.  Altogether it made for a gloomy day.

With the ship we have just passed the border with Monrovia and are now getting further and further away from the coast heading toward the Cape Verdes which are sort of on the same line or just north of Dakar. And Dakar is on the extreme west side of Africa. We still have one day to go and then we will arrive at Praia. Or to give it its full title Praia de Ilha de Santiago. Everybody onboard is looking forward to it. For the guests as we are finally hitting land again but also for the crew as I think that nobody has been there before.  I certainly have not. I have been to Mindelo which will be our second port of call but Praia is completely new.  So it is very high on my checklist to go ashore and have a look around. 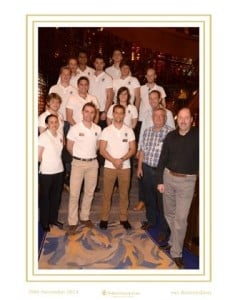 13 Officers onboard as part of our Nautical and Engineering Excellence courses. To the right Capt. Marco Carsjens, Chief Engineer Willem Dullaert (Ret) and Yours Truly. (Photo courtesy: Grace and her team of ms Rotterdam Image Creators)

In the meantime life goes on onboard and that means that training continues. We are now 16 days into the program and slowly but steadily we can leave the theory behind and turn to practical items. It takes a while, many days in fact, before the group was ready to start tying all the strands together of what was discussed so it starts making sense.  And now we are getting there.

While the engineering group continued their voyage of discovery into the workings of engineering items, the deck side was moving towards the practical side of watch keeping. In groups of two they are now observing the watch keeping sequences and routines on the bridge and by the time that they join their own ship it should be familiar for them.

One of the ways that we do this is by means of touch drills.  It is something that we picked up from the Navy and it is a very clever way of getting familiar with certain routines. As an example we discussed what should be done on the bridge when a fire alarm comes in.  After a lot of discussion a list of items were compiled and these lists basically became a checklist that could be worked from.  Then it was time to go to the bridge and reenact step by step this checklist.  Not just by pointing, but step by step, going to each panel and simulating (touch – drill) pushing each button that is involved, making the announcement that goes with it and acting through the whole sequence.

Another item we are introducing now are case studies.  Incidents that have been investigated can work as lessons for the future and can be compared with the company regulations and doctrines that are there to avoid these incidents from happening again. It also helps to create a greater picture of what needs to be thought about when being on the job.

In the coming days, when we visit ports again, it will be a focus to run as many practical lessons as possible.