Today we have been sailing along the coast of middle Africa along the SW corner.  And by 19.00 hrs. we passed the town of Monrovia, after which the Country of Monrovia is named, The next well known city is located more towards the north is called Freetown, in Sierra Leone and thus it will take a while to get there.

Sometime in the past I dedicated some blogs to “Un-sung Heroes” onboard the ship. Crew members who work behind the scenes, and who are seldom seen, but who do play a vital part in the operation of the vessel. Whether on deck, in the engine room, or in hotel.  Functions onboard which are not noticed, until the toilet stops working, the laundry does not arrive, or the daily newspaper does not show up. One of those functions onboard is the florist.

For a long, long time Holland America has prided itself on having fresh flowers on its ships.  In my records I have proof that this was a regular routine since the 2nd world war. I would not be amazed if they did it before that time as well.  In those Trans-Atlantic days it was fairly easy to accomplish this. The ships were in port every 7 days and a local florist could wheel everything ready made onto the ship.  Also when the ships went cruising it was not that difficult as apart from the World Cruise most cruises were of 10 to 11 days length or shorter and the ship returned to the same home port. There a local florist could again just wheel all the needed flower arrangements onboard. 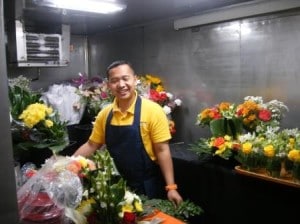 Mr. Rustadi, the ships florist on the  ms   Rotterdam.

But Holland America started to make their cruises longer and longer and the logistics became more and more difficult. So a number of years ago it was decided to appoint an in-house florist but who works for an outside company.  While onboard the Florist reports partly to the Exe. Housekeeper and partly to his Boss ashore. All the ships florists come from Indonesia and thus fit in seamlessly with the Housekeeping Department. 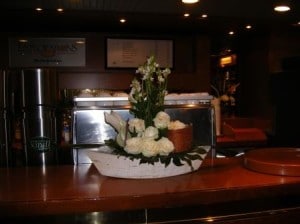 A small display on the counter of the Explorations Cafe.

Working with an outside company, solved one big headache for the company and that was to get flowers onboard on a regular basis; especially when on a long cruise such as a World Cruise or what we are now doing now, going around Africa.  The whole African continent is full of beautiful flowers but getting them on the ship is another matter. For an outside expert it will be much easier to arrange what is needed than for the company itself whose purchasers and buyers do not necessarily have the expertise to get on board what is needed, desired and to timely source it.

The Florist has his own little Green house down stairs, although it is really a cold store to keep the flowers in good order until they are needed. There the large and small bouquets are made and then distributed in the ship according to a pre-approved location plan. 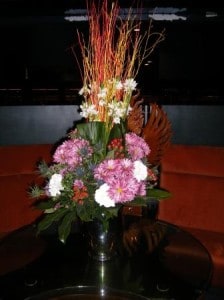 A large composition in the entrance of the Dining Room

On top of that the florist also takes care of the fixed plants and flowers in the ship such as the Orchids on the Lido Tables and the greenery in the various public rooms. The latter took a headache away from us to. Before the Florist was there, looking after the plants was in the hands of the Dining room, which is the most creative department we have here when dealing with displays. The Dining stewards appointed to look after the greenery onboard where quite often very exuberant with water and killed everything with kindness. Exactly the opposite of what they were trying to achieve.

So now we have the florist and as you can see, he has some beautiful creations on display in the ship.  One of our unsung heroes……. Crew members who make a Holland America Cruise just a touch more special.

What would we do, if a shipment of flowers would miss the ship?  We have a plan B. Look at our art onboard.  In the aft staircase on deck 4:  Flower Still Life called “Bouquet by night” by the Dutch painter Reynier de Muynck. 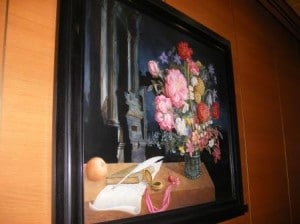 Tomorrow we are at sea again and then in the late evening we should start approaching Dakar where the ship can take a straight course to our next port of call, Praia in the Cape Verdes.