The approach to anchorage of Port Elizabeth is dead simple. Coming from the South you come around the most western point, line up on a course of 90o, pick your position and put the brakes on. The only three items of concern are the swell, the wind and whether the anchorage is blocked by sailing yachts or not. I was hoping that I could go forward enough so that the ship would be in the lee of a protruding cliff to the North so that the long and high North Atlantic Swell would not affect the ship. While sailing in, we saw that all the sailing boats were nicely tucked away, deep in the bay. That far in I could not go anyway as the sides of the bay are too shallow and the centre has to remain open for the frequently running ferries toward to St. Vincent and the other Grenadines. They even have patrol boats for that purpose in the harbour to ensure that the sailing yachts do not drop their anchor here. Those patrol boats were very busy during the day as there was a lot of sail boats going in and out or milling around in general.

Things looked well. When we arrived there was a bit more wind, 15 to 18 knots, than I had hoped for but nothing out of the usual. So we used two anchors and I moved the Prinsendam forward until we were nicely out of the swell. All was well in the world. The ship slowly yawned but only a little bit as she was kept nicely in check by the two opposing anchors and chains. At least until 09.00 hrs. Then the ship started to yawn more and more due to the increasing wind. Yawning soo much that we knew that the anchors were not holding that well anymore. Time to go to battle stations. The wind had by now breezed up to 30 knots and that is not pleasant. We were less then a half a mile from the dock, which was located deep in this sheltered harbour but still the wind managed to start producing waves over that short distance. It became a bit of a bumpy ride for the guests. So we picked up the starboard anchor and plan A was to try and bring it further into the harbour. The chance of the Prinsendam running aground with this strong off-land wind was zero as I had a hard enough time to get close to the shallows because of this wind. Thus we deployed the starboard anchor again, made the chains even length and thought we had it all under control again. 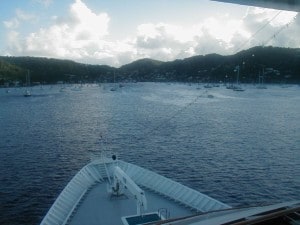 The weather was a lot better than shown in this photo as I took it through the blue sun screen cover of the bridge windows.

Not so, the wind decided to try 35 knots for a moment and there we went again. The sea bottom here is mud with sand and sea shells. That is good holding ground, up to a certain strain on the anchor. Then the sea shells tend to break up the compactness of the mud and the anchor slides out, digs in again, slides out, etc etc. The only option was to pick up both anchors and stay on the engines for the remainder of the day. I brought the ship as close as possible to the shallows and then found a balance of engine power against the wind and kept the nose into the wind with the thruster. It worked fine but it makes a long and tedious day, with constantly being focused on changing winds.

Where all this wind was coming from remained a mystery. The weather forecast gave 18 knots through out the day but that was only correct during our arrival and departure. Still the guests saw the port and had a good day and visited Port Elizabeth. Bequia is not on the cruise schedule very often and thus a special happening. Because of the wind and the swell I had to make a lee to pick up the tenders and then we slowly sailed towards our next destination St. Georges, Grenada.

We are scheduled for the cruise terminal pier, together with the Serenade of the Seas. The winds are supposed to die during the night and that means that we should have a quiet day tomorrow.