It was bad, very bad on arrival. While approaching the pilot station it was blowing over 50 knots from the East.  Not exactly the sort of wind that makes you feel happy; and certainly not when having to sail with slow speed through a narrow port entrance.  Luckily the reports from inside the harbor were better, 25 knots of wind, in line with the dock.  The harbor basin is quite wide and once we had swung around, we would not drift. I had ordered one tugboat to control my stern in case the wind decided to changes its mind and thus with that plan of action ready, we approached the pilot station.  Fully in compliance with Murphy’s Law, the pilot was late and we were requested to slow down and wait, right at a moment that you do not want to do that, as the slower you go, the more you drift. Had the pilot advised earlier that he was delayed, and then I could have slowed down in more open waters. Thus the best solution was to go as slow as safely possible and “drift” around the breakwater in such a way that the centre of the ship would stay in the middle of the fairway.  That looks a bit strange when you are standing outside and looking at the bow. That bow is constantly pointing towards the land, almost as if hitting it but then slowly but steadily you see the ship drifting by and clearing the port entrance. By the time that the pilot was onboard I was just pointing the nose between the breakwaters and drifting in.  Once the tugboat was secured it was a quick spin around and then going astern towards the berth. Near the dock, the wind was blowing from a different direction than had been predicted by the pilot so I was very happy with my tugboat.  It was windy, rainy and chilly. Still we made it and that is all that counts.

Today we had a more unusual crew training going on. We have a very extensive list of trainings and drills that we have to do.  The cycle for these drills are computer stored and when one is due the computer “flags it” and the safety officer adds it to the monthly safety schedule. The most frequent ones are boat drills, fire drills and job safety trainings.  A very interesting one is the Triage Drill. Here we simulate a larger number of injured people onboard, in fact so many that the medical department cannot cope with it.  With two doctors and two nurses there is of course a limit to what they can do.  It is the same ashore; the local emergency services also have a limit on their capacity and if going over, have to make choices, set priorities and/or call in more outside help when possible. 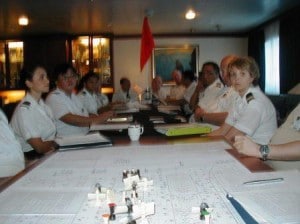 Triage table top in the captains cabin. The red flag on the table is the one that denotes critical injured treatment location during the exercise. the chess pieces in the front are used to simulate the movements of the various groups.

We do the same on the ship.  With multiple casualties, the doctor has to decide who can be treated, who has a good chance of survival and who not. This is called Triage.  So I set up one of those drills. The day before we had held a table top discussion to go through the whole procedure. This is important as the medical staff now has to draw in a lot of crew with stretchers and try to source additional medical people from among the guests.  We all have routines for that and when going through the guest list we can lift out those that are or were in the medical profession.

This time we had 13 injured crewmembers in the show lounge and after the fire squads had ascertained that the area was safe, the triage doctor was allowed in to quickly assess each patient.  Each victim then receives a colored tag that denotes the chance of survival.  Light, medium, severe, beyond hope.  Then the stretcher teams move in and transport the injured person to a designated area. That area is a public lounge if the ships hospital is full or un-available. The location is recognizable by a flag standing on the route and that flag has the same color as the tag on the patient.  Once at this location the medical team can then provide the necessary aid.  The drill takes about 45 minutes and involves nearly 75 officers and crew.  That calls for a lot of coordination and that you have to train on a regular basis.  The company has extensive protocols for this and each time when we do these drills, improvements are suggested and incorporated in the protocols.

During the day, the winds died down and the rains drifted away so that we still had a half decent afternoon. It did not affect the guests too much, they went out anyway. We sailed by 5 pm. and barely outside we felt the waves that had been whipped up by those strong winds of last night.  Waves of nearly 15 feet high on occasion. So for the 20 minutes that it took to get into open and deeper waters, I kept the Prinsendam on slow speed to make the ride more comfortable and the pitching as little as possible. Then we turned to the south and the stabilizers could do their job as the pitching now turned to rolling. By 8 pm. we sailed by Capo Spartivento, and we were gone from Sardinia.