And so after 5 months of vacation, I rejoined the wonderful world of Holland America. The company had been so good to give me a split flight from England via Amsterdam and thus I could visit my 96 old mother. She is still doing very well but as I am the only child, she has the problem that when I disappear for three months, there is no family visiting. So I managed to get a stopover in before I had to face reality again. I was not the only one descending upon San Diego to join a ship. Today there were 3 cruise ships in port altogether. The Statendam, Westerdam and the Sapphire Princess which was for the port of San Diego not a bad way to kick off the cruise season. All three ships were there for their first call of the season and all three were coming down from Alaska. The last two weeks of the Alaska season had been a bit windy; the Statendam observed on one occasion wind speeds of up to 80 knots and 45 feet high waves, making all crews quite happy when the ships were leaving the Great Land behind. A lot of them were even more happy as the call at San Diego meant that a large number of them could go for a well earned vacation.

I joined the Statendam with 48 others . I believe the Westerdam had a similar number and it makes sense to assume that the Sapphire Princess had even more as she is a much bigger ship. That shows an aspect of the company’s that the guests do not often see.  The crew transport and flights are often organized in a similar way as for the guests who have booked everything through HAL, including transfers. For that purpose we have a number of Ladies in the Air/Sea department who each look after two or three ships for all the crew travel needs. It must be a job that is enjoyable to do as some of them have been with the company for many years. My current travel Lady, Lucy, has been around since the mid 80’s.

Flights to and from the ships can be complicated as crew live in the most weird and wonderful places all around the globe but the biggest challenge is normally the last part, getting from the hotel to the ship. Here there are often challenges to overcome, varying from not getting the crew out of bed on time or even finding them in the right hotel. Sometimes the transport person did not get out of bed on time and if that happens then we have a real issue. The problem is most of the time that we all have to get onboard before guest disembarkation starts as the Custom and Border Patrol does not allow a counter flow coming into the ship when they are processing the outgoing guests. The disembarking crew always leave after the last guest is off the ship and during that window the crew does their hand over to the boarding colleagues. In each port there are different transport arrangements but in most ports it is done by an independent sub contractor. In Fort Lauderdale a large bus pops up, so it looks like we are all going on a school outing but here in San Diego we use the Super shuttle company. By 07.00 we saw 8 blue vans standing in front of the hotel to collect us all and bring us to the ship. It took a bit of captain’s influence to get all the crew in the right vans, as the drivers did not know one DAM from the other, but by 07.30 a whole convoy worked its way down Mission Valley and towards the port. By 0800 we were all on the ship and ready to absorb all the things that come along with having a job onboard. By 11 am the disembarking crew left. For those who need more hand over time such as Senior Staff, the CBP is always willing to make adjustments and thus my colleague, Capt. Frans Consen, could stay until 2 pm. Although transfer of command always takes place at noon time if it is a regular port call.

The remainder of the day ran very smoothly and I think that the port was quite pleased with getting the three ships out as scheduled, as a first call of the season is always a challenge because you have to get the whole machinery going again. We are now on the way for our 14 day Panama Trans Canal cruise which will eventually end on 14 October in Fort Lauderdale. For the time being the weather looks good. There is a post tropical storm called Hillary off the coast of Mexico but she is moving very quickly into the Pacific and diminishing fast in intensity so we should have a few good days to start with. 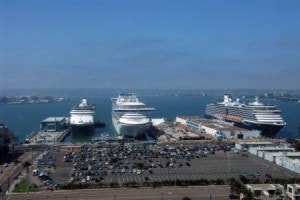