Again it was a very small world this morning, dense fog, when the shipyard awoke. But the sun came out and it burned away later on.  Nice, sunny and dry is exactly what we needed as we had the official inspection of the crew drills today. 5 Representatives from Lloyds Register had arrived on board and were witnessing our Fire Drill, Emergency assembly of Guests (simulated) and Crew and the lowering of the boats. Every company has a different system to comply with the SOLAS regulations and thus the Inspectors are more concerned with the flow of the operation and the crew knowledge than looking into: how we exactly do it and achieve the required result. 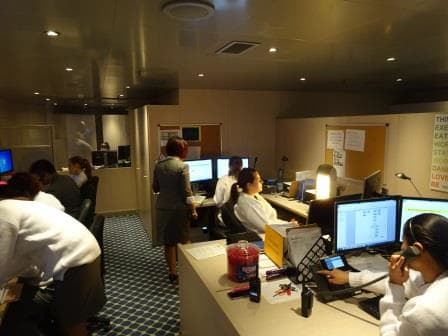 The Back of the house – front office turned into a crisis handling centre. All phones are manned for reporting and coordinating. (This is only one 3rd of the whole area)

The major challenge is on a cruise ship is to get everybody accounted for.  Thus we have roll calls but also search parties to look for people who fail to show up at the roll call. Then we have to take into account that telephones and the public address system might fail (unlikely but………………) and thus we have messengers and back up groups. The accounting, the Mustering, of everybody is controlled by the Front Office under the leadership of the Hotel Director and the Guest Relations Manager. Assisting them is the full Front Office and Pursers department which is a group of over 20 people. They monitor the movement of everybody on board from the moment the Captain orders a General Mustering until everybody has embarked into the lifeboats and in the life rafts.

In the meantime we are only being 28 hours away from the handover. On 31 March 2016 at noon time, the ship will go from: Fincantieri New build 6241Nassau, to Koningsdam HAL, Rotterdam. Then we still have a few days to finish things off but by noon time on the 31st. we will become responsible for the ship. For this purpose the big bosses (BoBo’s we call them in the Dutch language) are arriving. Apart from our top man Orlando Ashford and top – top man Stein Kruse also Mickey Arison is expected and any higher it does not go. So housekeeping is all over the place to make the ship as much shipshape as possible. It is still a frustrating struggle as one area has just been cleaned and then a Yard person shows up to complete another minor detail and makes a mess of it again. In the past few days the direct management of the HAL Group already arrived on board in the person of Keith Taylor the Sr.VP and with them several other V.P’s who are all part of the hand over process and the final review to see if everything has been delivered as expected. 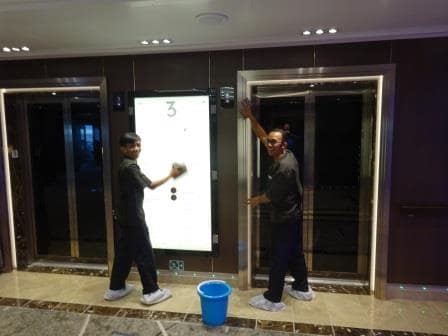 Cleaning the Elevator deck display. The housekeeping uniforms have turned a shade darker than they were before.

The Officers and Crew are edging more and more towards trying to get the shipboard routine going. Deck and Engine are starting up the regular watch system although they are not allowed to push any buttons until the 31st, noon time and the Hotel Department has been issued their uniforms so now we can recognize who is doing what. The Koningsdam is the first ship where a complete new uniform –line is being rolled out. You will see that it is quite a break with the past but what has been designed goes very well with the new setup and coloring of the various Hotel Operations. I will post some more photos in the coming days, “when the dust has settled”. 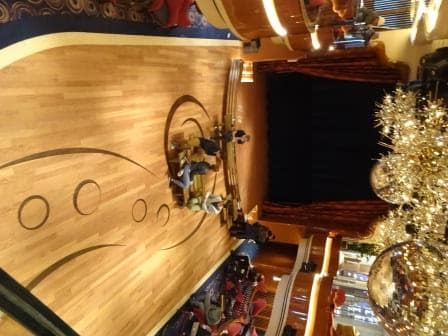 Something is being rehearsed here involving a picnic bench. The rest will be revealed when the ship sails.

Now we are so close to sailing time, the preparation for the guests is becoming more and more important. To the shock of some people who were completely engrossed in the new building details, we happen to be a cruise ship and our purpose is to carry Guests. So slowly but steadily we now see entertainment coming to the foreground and intensifying their training and upping their readiness. What they are all going to do is still a surprise. 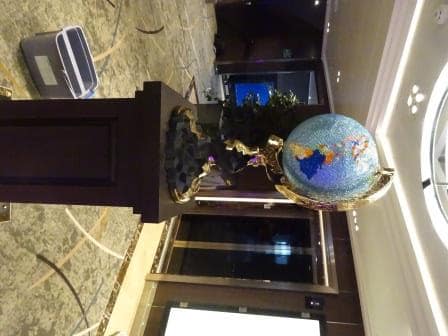 The Globe on deck 3 in the main staircase. The grey bucket is NOT part of the official setup.

The art people are relentlessly continuing to cover each and every blank space on the bulkheads of the ship and if you appreciate art then you now need a 14 day cruise to have sufficient time to look at each item  in a little bit of detail. So today two items, they just installed globe on deck 3 main staircase and Elizabeth Taylor and Richard Burton. The globe is the firm favorite of all the Italian contractors. If I would get a dollar for each selfie taking with the globe, then I could cruise all year for free. The Burtons were a bit difficult to recognize, I had to stand at a distance to take the photo. I have no idea though who the other two are. Any art specialists out there??? 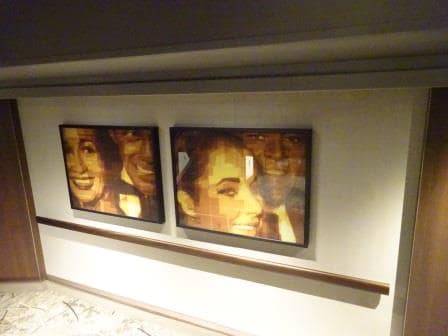 On the Sb side The Burtons. But who is the couple on the left ???