It has been very windy in the Caribbean Sea during the last few weeks and as a result the currents were much stronger than usual. That gave us a nice push in the back yesterday when we were mid Caribbean and last night a strong push against us when we were going through the Windward Passage. Normally the current & wind combination slow us down by about a knot or so but this time it was almost three knots. Once we were around the corner and sailing westward north of Cuba we had everything going with us again. We will keep that positive current all the way to Fort Lauderdale going with the flow of the Gulf Stream. As the Gulf Stream is an extension of the currents in the Caribbean it should also be stronger than normal. With favorable current comes less fuel consumption and I estimate that I can save on this stretch at least 10% compared to what is budgeted. That is not pure profit because when going the other way we will have to use more engine power as now these strong currents will be against us. My only hope is that above Cuba the wind is going to remain light and if so then the adverse current there should fall away. The Caribbean, especially the southern part, is to remain blustery and I will not be able to save much there.

All the captains are very hot on this fuel saving business because a: it makes sense to do so and b. if we can keep the fuel consumption down it will mean that the company does not have to start levying a fuel surcharge to the guests. The cost of fuel is part of the cruise cost calculation but normally cruise prices are decided upon when the brochure comes out. It is impossible to forecast the expected rise of the fuel prices and so sometimes a fuel surcharge is the only option. The cost of fuel keeps rising. As mentioned two days ago (we paid $ 778 in Cartagena) the price of one ton of Heavy Fuel oil is now between 725 and 800dollars a ton and how high it will go is anybody’s guess. Thus the captains are watching every mile made and every twitch of the weather to see where we can improve. That is getting harder all the time as we have already optimized most daily runs between the various ports and that means that we are now looking at the small details in the hope we still can do better. 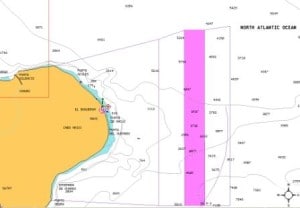 Cabo Maisi VTSS. cutting through from the lower right to the upper left is easily 5 miles saved. But northbound you stay to the East of the pink zone until you come to the end.

Sailing the straightest line possible has of course the best results on short distances but here we are hampered nowadays by the presence of the Vessel Traffic Separation Schemes around the East Side of Cuba (Cabo Maisi).  These highways at sea split the routes in a northbound lane and a southbound lane to keep the opposing traffic flows apart. Done for safety and so we happily comply. But if we could cut the corners there, then we could squeeze another 4 or 5 miles off the total and that would save another ton of fuel and give $ 700 in the pocket. I wonder if that is the reason why we see more ships crossing through the Separation zone between the North/south lanes without any regard for the rules at all. The navigators are reporting an increase of these wayward vessels so there might be some truth to it.

The best bonus that we can get tonight is to find the axis of the Gulfstream, where the current is the strongest and then let it push us as fast as possible to Fort Lauderdale Pilot station. Finding the current is a bit of luck, although we are helped by charts on the internet that do indicate where the axis is roughly located. That means that we can then switch off an engine and let the current do the work for us. I am keeping my fingers crossed for that one.

Tomorrow we will be in Fort Lauderdale and I am scheduled to be at the pilot station at 0615 and to be docked 45 minutes later. We will be in port with the Zuiderdam who we last saw leaving the Panama Canal ahead of us. They will be at a pier opposite us, instead of next door what the case is normally. Why that suddenly is, is one of the vagaries of life that might be explained tomorrow.

The weather looks good with clear skies and temperatures in low 70’s, which is perfect disembarkation weather. The wind forecast is for less than 6 knots and that means I will not need a tugboat. The pier we are assigned to tends to be windward and then you need to push the stern hard against it. So if we are not saving money on the fuel, then at least we will save it on the tugboat this time.