The Gulf Stream was indeed very strong and with an additional 3 knots in the back we were pushed towards the pilot station of Fort Lauderdale. The pilot station was all excited as the Zuiderdam scheduled for 0600 was behind us, instead of ahead of us. With both ships belonging to one company that does not make much difference so we switched pilot times around and sailed in ahead of them. This made much more sense anyway, as we had to swing in the inner basin while the Zuiderdam was swinging around in the Intra Coastal. They would have been blocking us, while we were not blocking them. It worked out very well and we were both docked at almost the same time. While sailing we could also solve the question of why we were not docked at berth 25, bow to bow with the Zuiderdam who was at the regular HAL berth of 26. There was a ship parked on Berth 25 which was loading a special cargo; yachts. 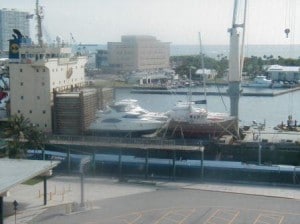 For a number of years it has been big business to load yachts in spring and bring them over to Europe for the summer and then in autumn to return them. There are even ships now that are especially designed for this purpose. They can be half sunk and the yachts simply sail in. The water is pumped out, as a semi dry-dock, and the yachts sit in the hull for a safe crossing to the other side. It is an easy way of getting your yacht to Europe; if it is A.  too small for an ocean crossing or B. you do not have the crew or the knowledge to do it yourself. This ship was not a specialized one. It was a regular cargo ship and was loading the yachts on the top of its cargo holds. During the day one by one the yachts were lifted on board by means of the deck cranes and stored on cradles. Yachts in sizes varying from deep sea fishing yachts to large family yachts meant for long journeys. It was interesting to see that there wasn’t a single “gin palace” among them. These were all yachts that were used by their owners to indeed sail and fish with.

Being in port on a Friday meant that there were only two cruise ships in. Us and the Zuiderdam; come here on a Saturday and there are least 5 or 6 sometimes 10. I think the top score was 13 sometime in the past. There was one other passenger carrying vessel in, the Bahama Express, which is a big Catamaran that has recently started a ferry service between Fort Lauderdale and Nassau. Last year there was also another ship, the Bahama Celebration, doing a similar thing but I have not seen her yet. By 5 pm. we had everybody on board and we followed the Zuiderdam out to sea. We will see her again in Aruba but because she is much faster than we are, she first makes a call at Half Moon Cay and then arrives at noon time in Aruba, while we go directly and will be there by 10 am.  Also as she is going around the north of the Bahamas, she can maintain more speed as she does not have to buck the Gulfstream. We have to, going the direct way. 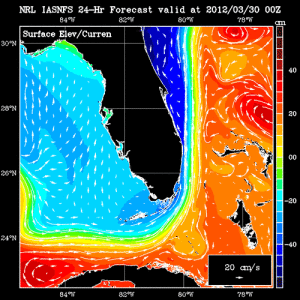 The Gulf Stream current from yesterday. If you go to the Gulf of Mexico you will try to hug the Florida coast line and stay in the light blue. If you have to go south then at least you try to stay on the edge of the general flow.

With 18 knots on the engines we were barely making 15 knots for the first four hours while we crossed the Straits of Florida. I had set my courses on the East side of the Strait where there is the least of the current, staying out of the Axis, but still while getting there, it was a hard push for the ship. Tomorrow we will be in the Old Bahama Channel and then the adverse current will depend on how much wind there is blowing.

The weather forecasts are a bit ambiguous, with one predicting regular Trade winds and the other predicting that the low pressure system that lingers over Florida will not move much during the night. I hope for the latter as it will mean less wind on the deck for the guests as well. Still we are looking forward to a sunny day tomorrow with temperatures in the mid 70’s.