Today we are in Bergen after having sailed the Inside Passage between Flam and Bergen with very sunny weather.  Although we had a bit of mixed weather this cruise, the sun has been coming out at the right moments with the extra bonus of having sunshine in Honnigsvag.  So a very good last cruise for our elegant explorer. While I am writing today’s blog, the weather in Bergen is following the weather forecast. It was sunny in the morning, overcast in the afternoon and it looks like rain in the evening. Weather forecasting for Bergen is not always easy as the port is surrounded on three sides by mountains so only when the weather comes in straight from the west, you can be spot on; with weather from other directions it can be a bit hit and miss as the (rain) clouds can bounce of the mountains bringing more and or stop the rain from coming over. But today it sort of worked out in accordance with the forecast plan. 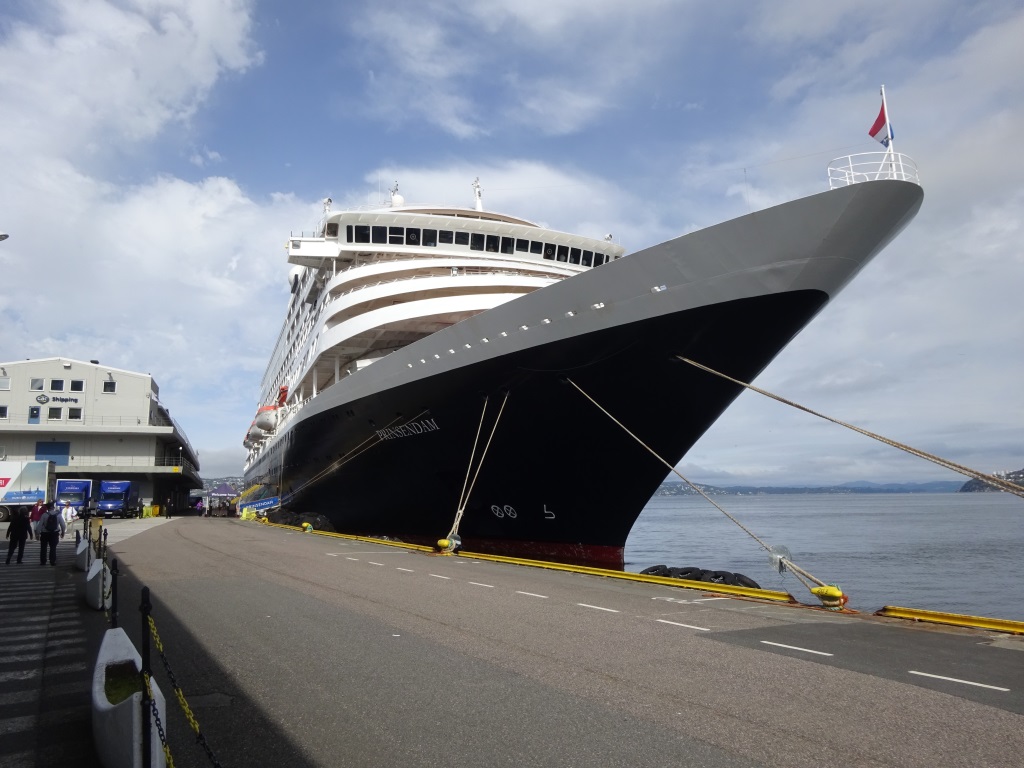 The ms Prinsendam we all know and I could not hesitate to post this shot of here to today basking in the sunshine and her long bow pointing elegantly forward. 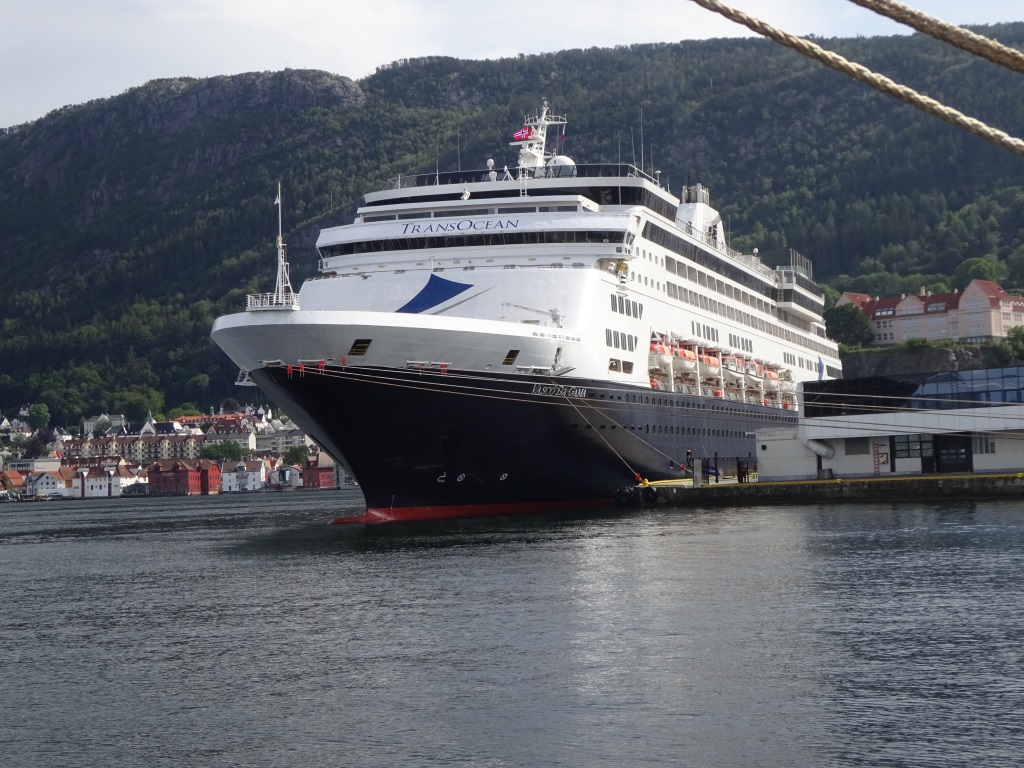 The ms Vasco Da Gama. First sailed as ms Statendam and then ms Pacific Eden. Docked here in Bergen today.The Statendam was transferred and sold in 2015 to P&O Australia which is also part of the HAL Group within the Carnival Group of companies. She went together with the Ryndam and the latter one is still there.  For reasons totally unknown to me, P&O Australia decided to sell the ship and it was bought by a Ukraine holding company which chartered her out to Trans Ocean / Cruise and Maritime Voyages. Renamed  Vasco da Gama she is earmarked for the English Market going from Tilbury England down to Australia. But first she is doing a charter period for the German market and hence she popped up today in Bergen. Her interior was changed in 2015 but outside she still looks like a Holland America Line ship. 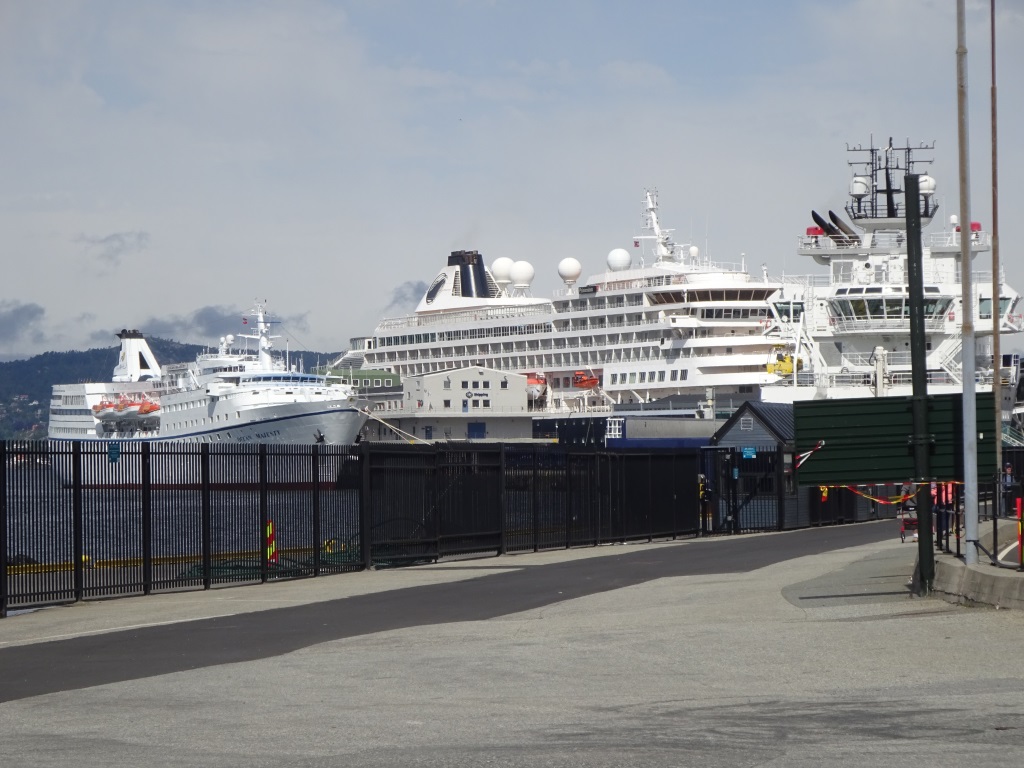 The Ocean Majesty is a record holder in the cruise industry as far as the number of names that she carried during her career. Built as the pax./car ferry Juan March, in 1965 she was subsequently named  Sol Christiana,  Krypos Star, Ocean Majesty, Olympic, Ocean Majesty, Homeric, and then back to Ocean Majesty again,

The 3rd cruise ship in port was the Ocean Majesty. She is an old ferry from the Canary Islands built in 1965 which was around 1990 converted into a small cruise ship of 10,000 tons with a capacity of 535 – 648 guests. Very high density of guests compared to the size.  In the period pre 2010 she was in charter for an English company called Page and Moy making cruises from England to as far as the North Pole and Greenland. When my wife decided that Holland America was too far from home and her mother, she worked as an escort (sort of Front Office, Shorex and Cruise Staff job rolled into one) for the charterer for a number of years. I went on a few of cruises with her while being on leave. It is on the blog for the period 14 Aug. to 28 Aug. 2007 when the ship was doing a lot of ports in Greenland. On board yours truly was at once ordered to work as General Gopher much to the amazement of the Greek Captain and his Officers. They absolutely could not understand that as a Captain I was willing to carry boxes. (But I was captain of a much bigger ship so they did not dare to say anything……)

Then there was the necessity for helping out as Tour Escort (tour escort nbr 1 paddle -sign everyday) as Page and Moy had escorts on all their bus trips so knowledgeable ship people were always there as needed.  Not that I minded that, as a captain does not get the chance very often to go with a tour so these were prime opportunities.  I still hold the record of going into the Hermitage in St. Petersburg, with a group of 50 guests and coming out with 65 mopping up all the strays from other buses, who were lost in this 1000 room museum . The little ship is still going strong now being in charter for the German Market.

The most expensive ship in port today was a yacht the Anna. Owned by a Russian Oligarch. He is worth about US 7 billion and this yacht built in 2018 in Holland cost him $ 250 mllion. With a length of 110 meters and a tonnage of 6294 she is just over half the size of the Ocean Majesty.  Pocket change must have been the price for him as the recent divorce from his wife cost him also $600 million. So in the scheme of things…………………. I do not know if the gentleman is in port with his yacht but according to the internet she is not available for charter.

We are sailing late tonight as the distance to Amsterdam does not demand a very great speed. Some of the crew, who have finished or nearly finished their packing, are grabbing the chance to get off the ship for a few hours.  The Shipping Forecast for tomorrow gives not that much wind and with this nice weather it means there is a fair chance of some fog patches during the night and day. But no high waves, so we will have a comfortable ride.  Tomorrow we have a final sea day and then it is the end of the cruise and the end of an era.

For the Prinsendam crew photos, I have three more:

First the Front Office. The group with always a smile on their face, regardless whether they get positive compliments or “negative compliments”. I have always had the greatest admiration for the people who work here. When in the past I would cancel a port, they would get the flak. Not me. When something went wrong with a credit card or flight, it was their fault and their problem to fix it. Going beyond the call of duty, they most of the time managed to do this as well. 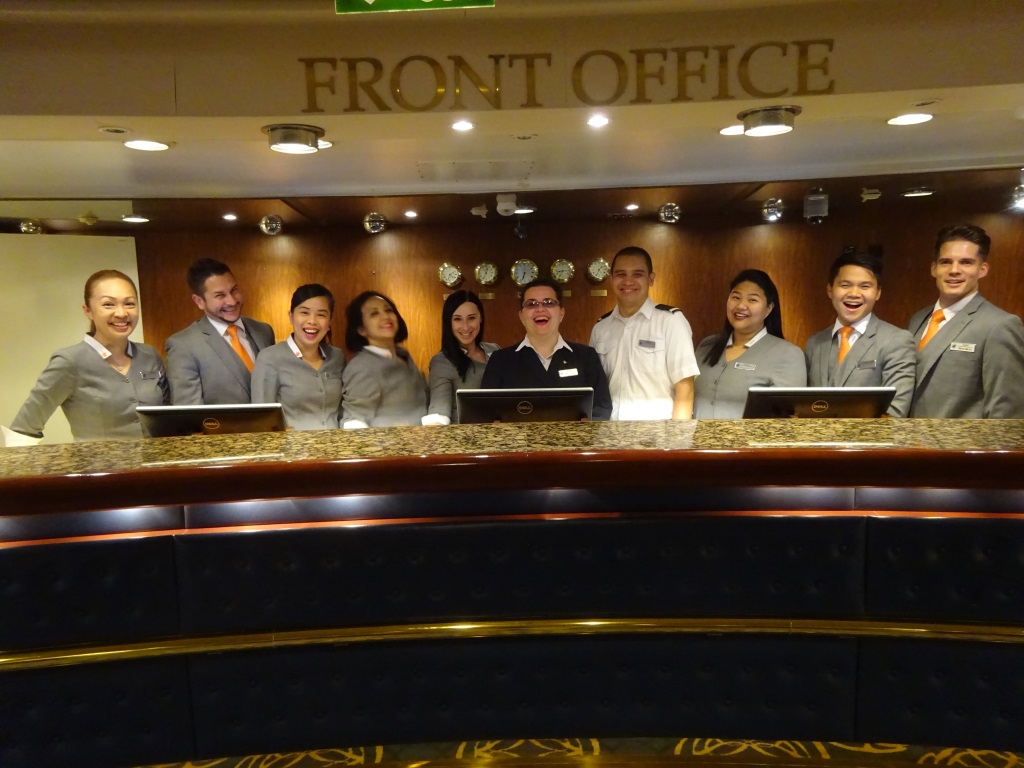 The the BLD. Those who invariably bring a smile to everybody’s face are the Bar Lounge and Deck crew, seen here in the Ocean Bar. Invariably happy they bring your favorable beverage accompanied with an appetizer. 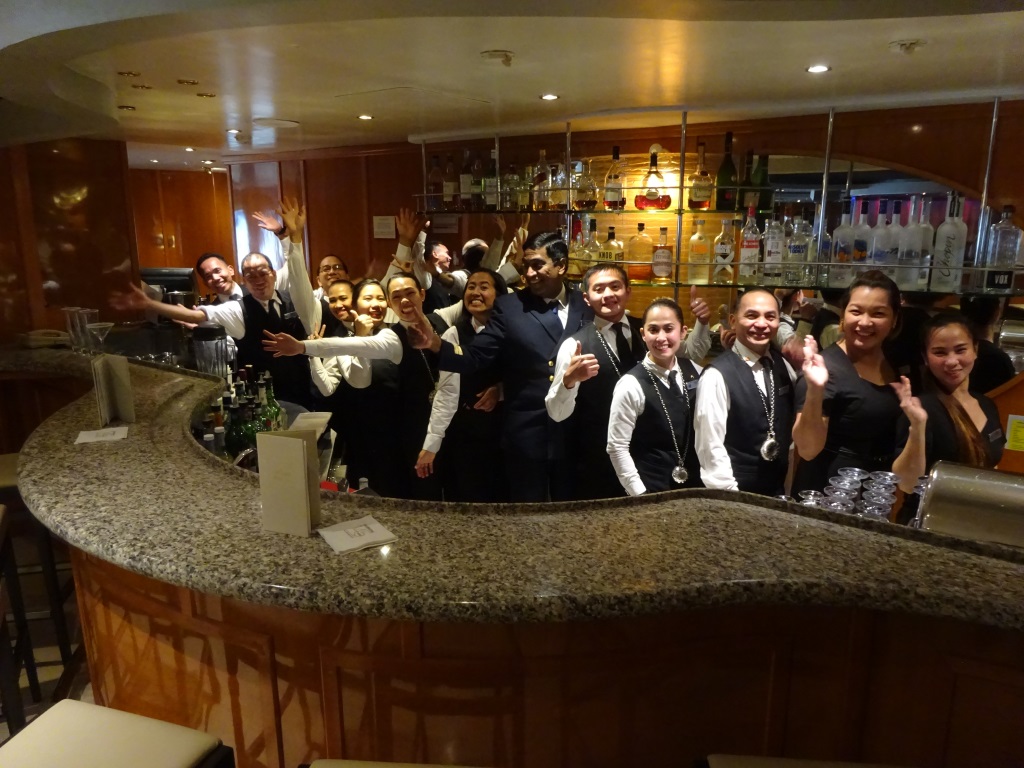 The B.L.D. Bar Lounge and Deck staff. Unfortunately the Deck Staff was already in bed as they start very early setting out the deck chairs and putting on the chair cushions.