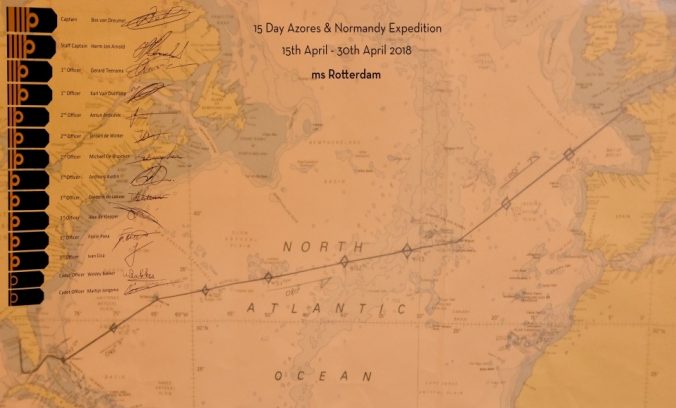 Zeebrugge is an entry port for Belgium, same as Antwerp but on a much smaller scale. Although with Antwerp you dock in the middle of the city (as long as your ship fits in the turning basin) and in Zeebrugge you are in the middle of nowhere but it is much less time consuming than the run up and down the river Scheldt and the whole long stretch over the Westerschelde through Holland. Zeebrugge is the Gateway City for Bruges and Bruxelles but is not so bad itself. The port runs a shuttle bus service to downtown Zeebrugge which is a small but homely town with a nice shopping street. But it also has a boulevard with a beach and that is very nice in the summer time. Especially if you like Mussels and Frites (= the Belgium version of French Fries). Today the weather was not that great for a beach day, with a light but cold wind and occasional rain but it was still good enough to be able to enjoy the tours to the hinterland. 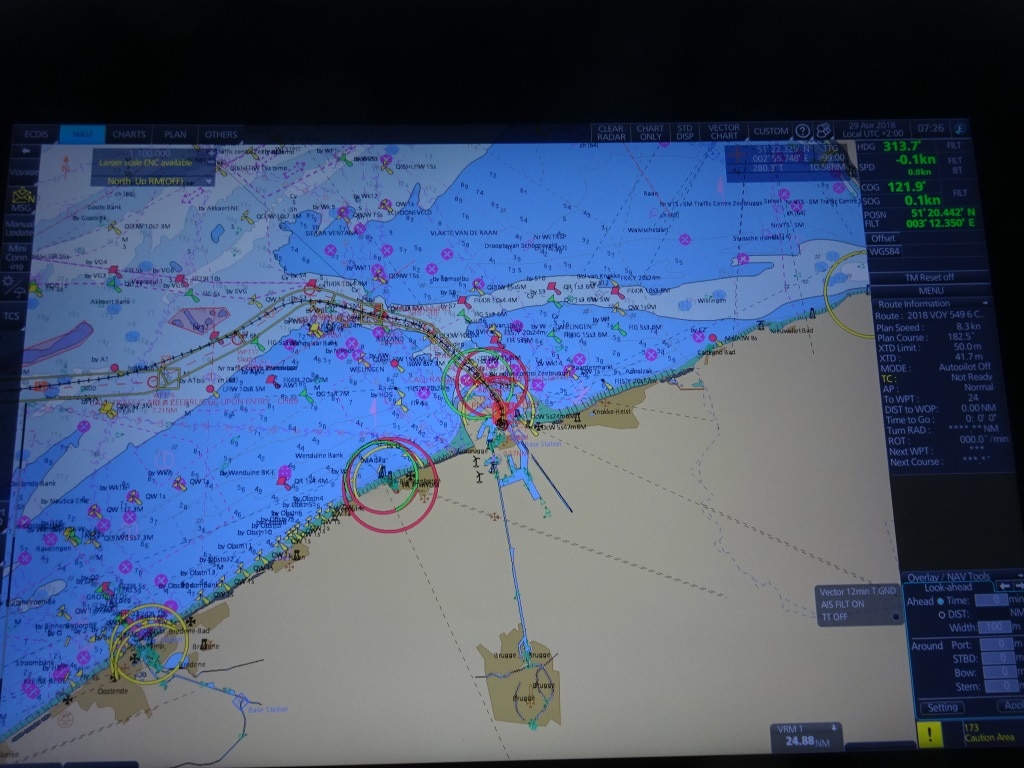 The light blue is the relative deep water of the North Sea (150 feet or more) and then where the light blue continues among the red and green buoys is where dredging keeps the wandering banks at bay. The big circles indicate various sorts of  lighthouses. The blue line straight down is the canal to Bruges for the smaller ships. We do not fit in.

Getting into Antwerp might take a long time compared to getting into Zeebrugge but also this port has its challenges. And that has to do with all the sand banks in front of the Belgium coast and the amount of traffic that goes up and down the North Sea, in and out of the Scheldt, and in and out of Zeebrugge port. The challenge with the sand banks is that they move. One of them, after which the pilot station is called, is called De Wandelaar, or The Wanderer, and that indicates already that it is moving all over the place. To avoid this there is constant dredging going on. In the approaches, but also inside the port itself.  For a while the main cruise ship dock was not accessible for ships with a draft over 8 meters. They had to go to the container terminal opposite. Not much of a problem as the port is big enough but challenging on a busy cruise ship day.  Today that cruise dock was occupied by one of those dredgers so we also went to the container terminal but one that is used for overflow and no containers were present. It did give plenty of space for our shuttle and tour buses. 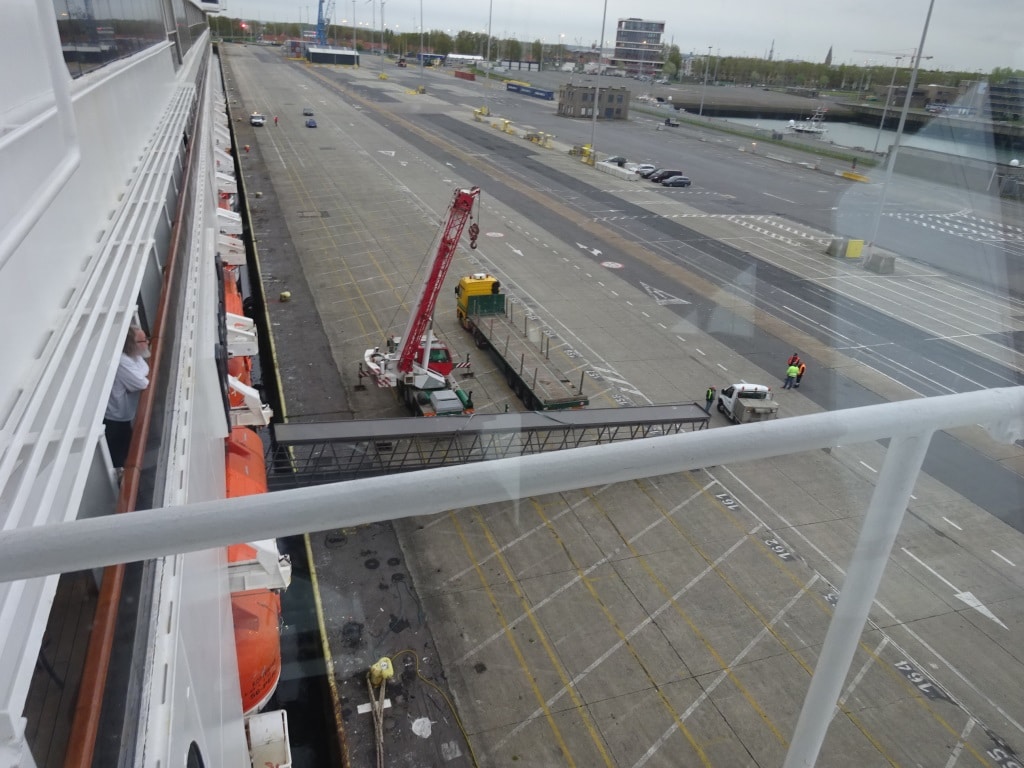 You do not dock at a container terminal for the view. But it does offer a lot of space for coaches and long gangways.  In the top right of the photo the church spire of Zeebrugge, about 10 minutes away with the shuttle bus.

Because of the sand banks, the pilot boards far out at sea and they even have an accommodation ship out there so pilots can sleep while waiting for their turn. Once they have completed their shift there is a fast boat that brings them back to solid land or more comfortable they can step off the ship that they brought in. That was the case today with our pilot; he was going home and the captain could not even tempt him with breakfast on board. Either he was in a hurry or he had had too many cruise ship breakfasts already in his life.

Although the pilot only has an advisory duty, most of the time he/she sails the ship in and gives direct orders (which are then acknowledged by the captain as being correct) to the bridge team. In a port like this where wind, tide and sandbanks can change by the hour that is the best way forward. Once it then comes to docking the Captain takes over again and parks the ship where pilot, harbor master and agent thinks it should go. If you go in and out of a port on a very regular basis, you can get a pilots exemption, so your ship can sail when it needs to, without delay. Most ferry captains have such an exemption as they are going in and going out as often as the regular pilots do. But you still need the local knowledge due to the moving sands, moving buoys and other things that Mother Nature can throw at you in these dangerous North Sea areas.

We will sail from here to Rotterdam and the weather is again going to be very windy. There is another weather front coming over which will bring a lot of rain and wind to the Netherlands. On one side I can live with it as I am going home tomorrow, on the other hand I hope that it will not affect the flights from Schiphol as my wife wants me home before cocktail time. 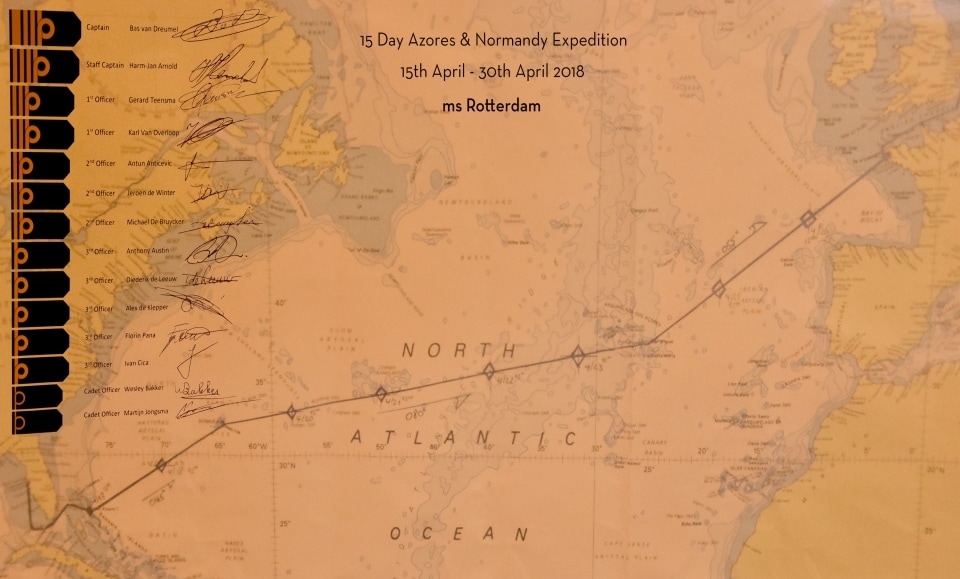 The Captain and his navigation team produced this North Atlantic Chart for the Guests. Marking the noon time position for everyday of the cruise. This was voyage 549 for the ms Rotterdam.

It is also the end of cruise 549, the ms Rotterdam’s Trans-Atlantic Cruise which has turned out to be quite a good one. We did have to cancel a port because of bad weather, the crossing was nice and quiet and we were just a bit unlucky with the rain during the last few days. But can be expected during a spring crossing. Now the ship will make a number of European Cruises, then make three Atlantic crossings between Rotterdam and Boston; and then start on August 25 a series of Canadian Maritime cruises to Montreal.

This is my last daily blog until 02 June. Then I will join the ms Prinsendam for three weeks and the first week is rather special as the ship will be celebrating its 30th. Birthday and we will visit her place of birth in Turku.

While I am on leave I am involved in something that seldom happens to a ship’s captain: opening an exhibition. As the Dutch King was not available, neither the Queen, nor President Trump, it was decided that I was the next best choice to do so. The exhibition is about the four Veendam’s the company operated and the predecessor of the first Veendam, the W.A Scholten. I was captain for four years on the Veendam IV (from 2004 to 2009) and thus I am somewhat qualified to be involved.

I will post something on the blog once the exhibition has been opened.

Thus is it time again to say goodbye to all my regular readers and those who tune in on occasion. I hope that you found my daily ramblings, interesting and on occasion diverting and maybe even educational. I thank you for your support and interest.

And I promised a Dutch “Art Deco” on the HAL ships. 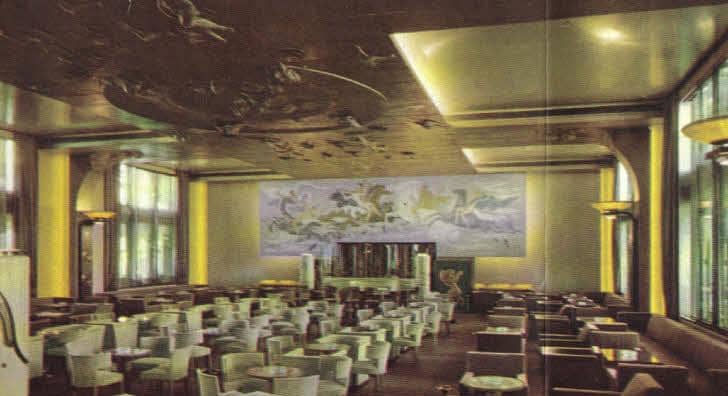 This is the Grand Hall of the ss Nieuw Amsterdam of 1938.  The decoration is much more subdued than on the Normandie but the coloring is not that much different. 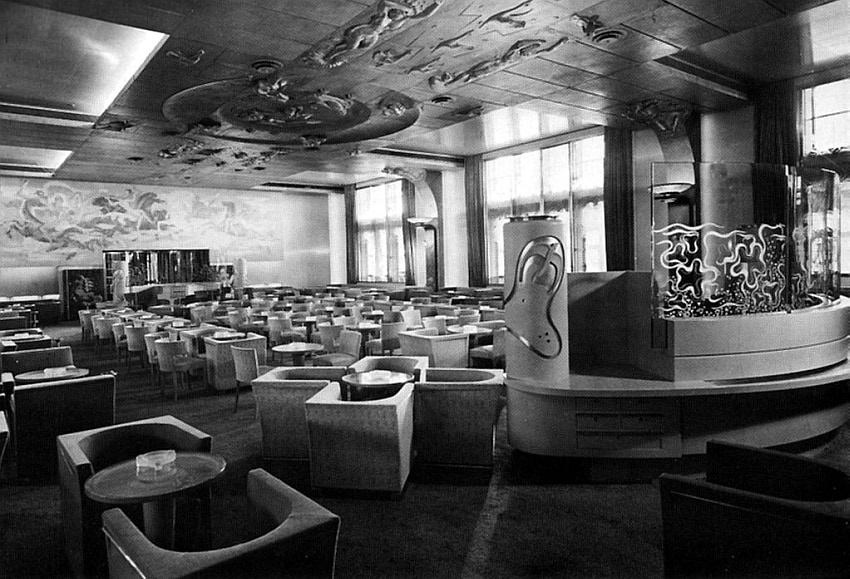 Again the Grand Hall of the ss Nieuw Amsterdam of 1938. Now in Black and White and seen from the other side. It is a mixture of styles. Some Art Deco, some Bauhaus and something what they called the “Dutch Style”. Still trying to find out what that is. Most famous is the ceiling with a number of nude sculptures, which gave quite a shock when the ship entered service. The ceiling still exists and is now owned by the Rotterdam Maritime Museum.