Today we sailed westbound from Katakolon towards our next port of call, Cagliari located on SE Sardinia. To get there you have to sail by Sicily. As it is an island you can sail around it and thus you can go North or South.  Going North means going through the Straits of Messina and by going south you sail along the south side of Sicily for most of the day.  Our cruise brochure indicated that we were to go south of Sicily as we had done the Strait of Messina the evening that we left Lipari.  There was also a second and very convincing reason not to do Messina for a second time and that was the Royal Wedding.  Most of our guests were looking forward to the happening which was going to be screened fully onboard the ship. Then it does not do, that the captain decides to do scenic cruising Messina, right at the moment that the happy couple are exchanging wedding vows.  So we stayed away from Messina and followed the Sicilian coast at distance varying from 4 to 12 miles.  You cannot always sail close here, as especially on the southwest side, there is a shallow bank with the name “terrible bank”. Such a name is not given without good reason. During bad weather it is a dangerous place to be with ground seas and swells breaking over the bank. Today we had sunny and wind still weather and the bank was not a problem. Still we stayed clear as a lot of fishermen had parked themselves there, indicating that it must be a good fishing ground. 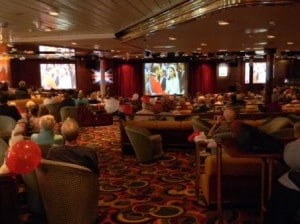 A packed house with the lounge filled to capacity.

On board everything was scheduled around the Royal Wedding. The company had organized that fleet wide the programs of the BBC could be seen. To make it an item for all to enjoy, The Showroom At Sea, had been renamed back into the Queens lounge, as it had been in the past, and the BBC transmission was visible on the three big screens.  By 09.00, the lounge was packed and interest did not diminish until the vows were made and William had kissed his beloved at least twice.  As it was beautiful weather outside with calm seas, the ship was a steady as a rock and nothing marred a beautiful occasion.  Although I have some British Officers onboard, they were rather quiet and not much of party was noticed. Maybe because most of them are Scottish and still remember the days of “Bonnie Prince Charlie” .  The Morning started with a lecture by Sir Frank Buckingham our travel guru and of whom it is widely known that Buckingham Palace is named after him. Why, because he was already involved in the tourism industry around the time that the place was built. His lecture gave a bit of background about who was who, who did what, who was married to whom, or no longer and what in general the background of all the proceedings were.   All information duly passed on with a stiff upper lip under the lecture title of Relentlessly Royal Rampage. By 10 am the BBC took over for the screening of the wedding. 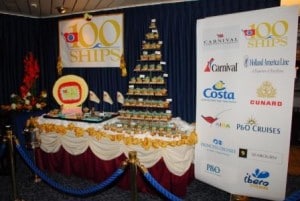 The Prinsendam 100th ship display. Created by the chefs of the kitchen led by Culinary Operations Manager,Colin Jacob and Executive Chef Martin Kusin.  The main part of the display were 100 cup cakes, with all of the ships names, a world map and a half round globe with on the front the 100th ship logo and the world on the back.

A second highlight of the day was “Carnival 100th. ship”. Recently the Carnival Magic was delivered to Carnival Cruise Lines. That brought the total number of cruise ships employed by Carnival Corporation, of which Holland America is the oldest daughter, to 100 cruise ships. Counting HAL, Cunard, Costa, Seaborne, P&O ,Aida   etc. etc. etc.   Never has one company owned more than 100 cruise ships or passenger ships at the same time in history. I had a quick look in my history files as in the grey mists of time the Hamburg Amerika Line, or HAPAG, came quite close because before the First World War they were the biggest shipping company in the world. But for that company to beat this number, you would have to count the cargo ships with passenger accommodation as well. To celebrate this fact, a competition had been called for, for each ship to produce a cake, or pastry –show lay-out-. Our culinary department created a display outside the dining room.

In the mean time we sailed further and further to the North West, heading for the South East point of Sardinia where Cagliari is located. In the course of the afternoon the wind started to pick up; the result of yet another of three day specials that we have been “enjoying” ever since I had to cancel Split 14 days ago. There is no sign in the weather forecast that the winds will ease of during the night, so it is going to be an interesting arrival tomorrow.