And thus we approached the Panama Canal in the very early morning hours. However things do not always go as planned so by 0800 hrs. the ship was one hour behind the published schedule, courtesy of some slow movers coming the other way. That meant that the whole transit was going to be put back due to the natural bottle neck at Gamboa. This is the Panama Canal headquarters about half way in the Canal. Here the Canal goes from single lane to dual lane, e.g. ships can pass each other between the Atlantic side and Gamboa but not between the Pacific side and Gamboa. A slow convoy moving towards the Atlantic and the convoy towards the pacific is delayed. And yes we were delayed accordingly. If all goes well you can make Gamboa around 11.30 in the morning. Now it was going to be 12.30 and that also automatically meant that the Veendam would not be out in the open (Pacific) ocean again until 1700 hrs.

The new locks waiting to be installed. Photo from the internet

My main interest today was to see how they were getting on with the new Locks. On the Atlantic side there is hardly anything to see as a high hill between the old locks and the new ones block the view. But they had an attraction there: the new lock doors had arrived and were parked for the time being on the edge of the fairway to the first set of Locks, the Pedro Miguel Locks. They are big, really big, soo big that it was difficult to get a picture of them in such a way that it did justice to their size. So I googled one but it shows the same location and setup of what I could not get on my camera the right way. We had glorious weather today, sunshine all the way to the Continental Divide.

There it rained and thundered for 5 minutes while approaching the 2nd set of locks and then it was dry again for the remainder of the passage. So everybody should be really happy about that one. A very nice un-eventful crossing. The first set of locks are the most impressive ones, as they have the 3 step going up and going down. But at the last set of locks there is more to see, as one side are the new locks, clearly visible taking shape and the other side there is a large visitors centre which is normally, and was today, full of people watching the ships go by.

A cruise ship of course attracts more attention than a cargo ship and so there was a lot of noise coming from the 1000 (?) or so viewers on the top floor. But the other side was the most interesting. 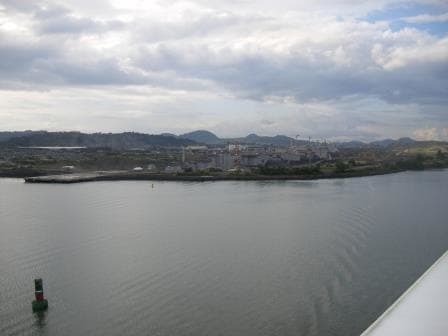 The Canal had a setback a while ago when it became clear that the wrong concrete was used when they started with the lock chambers. The Panama Canal Authority and the (Spanish) contractor are blaming each other but what happened was that the concrete was used did not set/harden in the rain. Who ever made the mistake must have thought that it never rained in Panama. Well if it didn’t then there would be no Canal and then there would also be no reason to pour concrete for new locks in the first place. However that issue has now been sorted and the lock walls are going up very fast and the area is enormous, gigantic and really impressive. 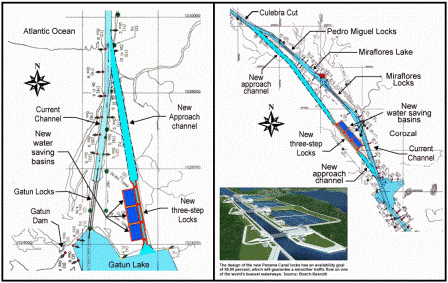 The new the new Locks fit into the old system

Although you can see it very well, it is still quite far away from where the ship now sails coming out of the old locks. When the locks are finished, the dam will be cut away and then there will be a Y pass created, giving the option to use the old or the new locks. For the cruise ships it would be interesting from a sightseeing point of view to go through both an old and a new lock. By 2016 we should know if the Panama Canal Authority is having the same thoughts. Tomorrow we will sail along the West coast of Panama and then later along the Costa Rican one on our way to Puntarenas. It is going to be interesting weather wise as there is the chance of a hurricane brewing further out in the Pacific. The weather gurus are a bit non-committal as to what is going to happen, so the only thing we can do is keep an eye on it and plots its development and movement.

The Veendam in the Panama Canal Webcam. (Courtesy of Lesley Schoonderbeek)