During the past night and this morning all our embarking guests made it safely to the ship then still having the chance to go ashore during this 2nd day in Callao. The weather remained the same as yesterday and that made more or less perfect sightseeing weather. The chemical tanker in front of us departed during the night and was replaced in the morning by two Chinese fishermen, who started discharging their catch. These are not small boats but floating fish processing plants with up to a 100 crew and the catch that was being off loaded was already chopped up in parts and deep frozen in the holds. While alongside the deep frozen catch was loaded into freezer containers and transported inland. I do not know where it was sent to but there are large processing plants in the Callao area so the fish might have been taken there.

We had the first day of this cruise that we could do some maintenance to the outside of the vessel. Many ports nowadays have severe environmental restrictions in place that prevent working on the ships hull. In some ports they are genuinely concerned about the environment and are trying to clean up their harbors from past abuses but in some ports I strongly have the impression that it is more a vehicle to generate fines. However in Callao the rules are normal. You are allowed to work as long as you do not drop paint chips in the water and do not spill anything. So the chief officer had ordered a cherry picker (also called Sky worker or Scissor lift) for fast and high work on the outside. It beats the constant adjustments needed for a Bo’ sun chair and it is a lot safer. Great was our amazement when instead of a cherry picker a 10 ton crane popped up, with a working basket big enough for a four piece band. However for the same price………..who complains. 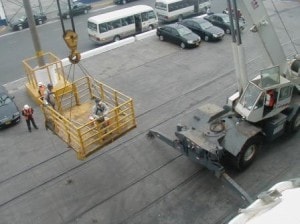 Our super deluxe paint box. What is not visible is the paint chip catcher that will be hooked on to the front as soon as the box is in position.

It did the job though and the port side exterior improved quite nicely. Now we have to wait for a port were we can do the starboard side. Then after Cape Horn and the Falklands we can probably start all over again due to the salt accumulation. Also when we are coming south of 60o.latitute, we are not allowed to do any outside maintenance at all as stipulated by the Antarctic treaty so we probably will not look very pristine by the time we arrive in Buenos Aires. On the other hand we are the Elegant Explorer and exploring does not always go hand in hand with elegant ball gowns but is sometimes more related to backpacks, tents and heavy trekking boots and when sailing in those sort of area’s the outside of the ship will take a battering.

In the mean time I was getting interested in departure as with portside alongside the leaving maneuver was not as straight forward as would have been as with being docked the other way around. Thus I decided for backing out and swinging around in the middle of the harbour. It made for a nice show for the guests. Each dock in the port was filled with cargo ships of all sorts and sizes and that gave something to look at, especially when you sail past them at a close distance. In the morning the Saga Ruby from the British company Saga Cruises had arrived and was docked at one of the finger piers. So something else to look at as well. This ship also has a blue hull and white super structure and could be mistaken from a distance for another HAL ship. However that ship was built in 1967 as the Vistafjord and has close by a completely different profile. She was one of the last ships still constructed with some Trans Atlantic service in mind, although by the time she came into operation it was nearly all cruising that she was used for. 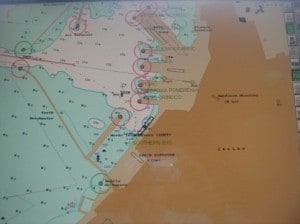 So we went out the same way as we came in.

With plenty of things to see we sailed out of Callao harbour heading for the port of General San Martin also called Puerto San Martin. We will be there tomorrow and the area is very arid. Also the dock is far away from the towns of interest, Pisco and Paracas basically because these towns do not have a port. I am arriving early in the morning as the distance from Callao is not that far and as it is a cargo dock, you never know what might be needed before you get alongside.

The weather looks the same tomorrow, very good with a bit more sunshine than today and temperatures in the mid 80’s around lunch time. The Callao pilot said that in the last few years they have more wind in the afternoon in San Martin than was the norm before and that it was all due to Global warming. Will we see.