In order to facilitate a quick clearance of the ship, the ms Rotterdam arrived early at Southampton. The pilot came on board at 07.00 hrs. and then the ship followed the winding way up to the berth. There are a few almost 90o turns in the fairway with a lot of current running and that makes  sailing in and out of Southampton always an interesting affair.  Southampton is the major cruise port for the United Kingdom and that could be seen today as the Ventura from P&O and the Celebrity Eclipse were also in port.  They sail regular cruises from Southampton while for us it was just a stop on the way to give our 400 British guests the chance to board without having to fly. 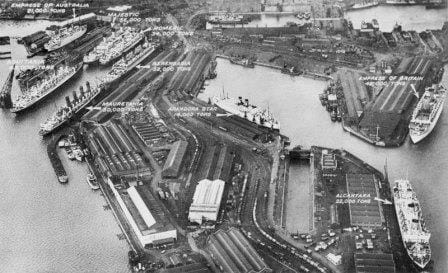 The heyday of Transatlantic Travel. The Southampton docks full of Passenger ships.

Southampton has been a port of call for Holland America Line ships since May 1923 when the company decided to change Plymouth for Southampton.  One of the reasons was the better train connection from this port.  By the mid-thirties of the 20th. Century it was THE port for the Big Transatlantic Liners to sail from.  Big names such as the Queen Mary, Queen Elizabeth, the Normandie and our own Nieuw Amsterdam called here after coming from and returning to their home ports, or in case of the Queens having their home port here.

The layout of the docks now. Where the red lines go, Cruise ships can be found docking. (Map courtesy of ABP Ports of Southampton)

The arrival of the air plane changed all of this. Not only for the North Atlantic trade but also for all the other routes to and from outposts of the British Empire. Famous names such as Union Castle, P&O, British India, drastically reduced their Passenger Liner activities. Some made the change to cruising such as Cunard and P&O but some completely disappeared such as Union Castle and British India. Holland America stopped calling here when our Transatlantic service came to an end in 1971. It was not until we brought the ms Rotterdam to Europe that we eventually returned. Dover and Harwich were our regular change over ports but when the option came to call at Southampton as a secondary embarkation and disembarkation port for British Guests, we came back again.

We docked today at the Ocean Terminal. Quite often the ships of Cunard dock here, while  P&O and other cruise ships dock further into the port where there is a whole row of other cruise terminals. The Ocean Terminal was completely refurbished not too long ago and that must have given the guests a positive impression to start with today. 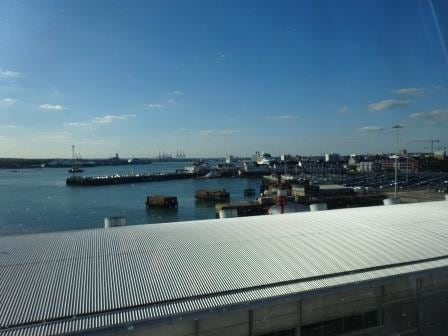 The cruise ships along the long dock further into the port. The tender Calshot can just be seen in the foreground.

What was interesting for me was to see another (Ex) Holland America Ship docked next to us. The Ships Tender Calshot. Originally built to service the Ocean Liners which did not dock at Southampton but stopped for a quick service call and stayed at anchor between Southampton and the Isle of Wight. Being built in 1930 it remained sailing in Southampton waters until 1964. Then it was bought by Holland America for tender service at Galway in Ireland. She sailed for an Irish subsidiary but had the Holland America Line funnel colors and was called Galway Bay. With the continuing decline of the Transatlantic Trade, the tender service did not last very long and the Tender was sold on.  Eventually it returned to Southampton and is now step by step being restored to its former glory.

So our primary reason to be here was to embark our British Guests but as the Ocean Terminal is right on the door step of Southampton and the port, most guests took the opportunity to walk into town or take the short taxi ride.

I was on the gangway to get my trainee’s on board and after the compulsory Safety Indoctrination for all new embarking crew members, we started our classes. 20 days of digging deeply into the wonderful world of Holland America.

The good ship ms Rotterdam sailed at 17.00 hrs. after we got all the guests on board. We will now sail (almost) straight along the French coast down to Spain. The day after tomorrow we will visit La Coruna (as we Dutch spell it) or A Coruna as the Spanish call it. Weather still looks good with a bit of wind but not much swell to make life unpleasant. 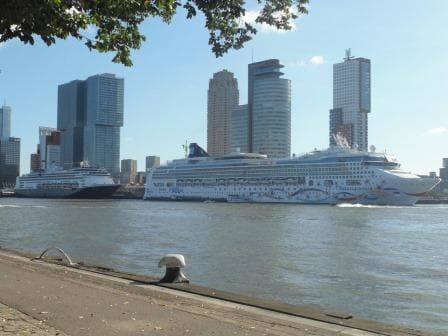 The sight I could not see yesterday as I was on board ms Rotterdam and ms Norwegian Star both docked at the Rotterdam Cruise Terminal. (Photo courtesy B. Janssen)