The weather remained the same as yesterday; with a strong Northerly breeze and a following swell. Only by mid day, when we were almost at Cabo San Lucas did the wind die off and the swell lose its strength. There was a very good reason for this. Cabo and Cabo Falso quite often referred to as the “Cold Cape, did honor its name this time. Today it really separated  two weather systems. The boundaries were so sharp that I could point it out to the guests and even the most inept weather observer could see it. Behind the ship wave tops were indicating NW 4 to 5 winds; around the ship it was nearly wind still and ahead of the ship the wave tops were E to ESE 4 to 5 winds again. It is seldom that you can see this phenomenon so clearly defined. For us it was good, as although it being a Sunday, it kept all the six pack navigators tucked away in port and we could just sail around the Cape for a bit of sightseeing without having to keep changing course to avoid them. For Cabo itself, things where not so pretty. Easterly wind is only observed here when there is a strong cold front coming over and that does not happen too often here. If it happens then wind and the waves generated as a result of it, run straight over the anchorage into the harbor and then you have a problem.

And a problem they had today. I saw waves of about three feet high and the wind reaching at least force 5. That means that you cannot run a tender service from the anchorage into the port. As a result there was no cruise ship at the anchorage, while normally there is a Celebrity ship there on this day. The captain of that ship must have seen the obvious and moved on to the next port or opted for a day at sea. I hope that the Statendam will remain spared from these cold fronts during the coming winter as it is never nice to cancel a port in general and certainly not if it is the last port of the cruise. Still nothing to worry about this time, it will be three weeks before the Statendam is back here. We just had a windy afternoon while we crossed the Baja California on the way to Puerto Vallarta. Coming evening the wind should die down when we come under the coast. Then during the night it should pick up again with the NE wind freely flowing through the Bahia de Bandera’s at which end the port is located. Then coming closer the wind should die off again as the port is protected from any wind but from the South West. So we will be ok for tomorrow. This whole weather pattern is caused by a severe cold front laying over the Gulf of Mexico. Yesterday it produced winds of up to 45 knots in the Vera Cruz area and caused even more wind in the Gulf of Tehuantepec. Today the weather forecast indicates that the wind system is blowing itself out and then a period of wind still (or nearly) weather should follow. I just have to patiently wait how quickly that wind will die down to see how it will affect our Tehuantepec crossing. For Huatalco we are ok, because as for Puerto Vallarta, the port is sheltered from everything but the South West.

We did not see any whales and I am still puzzled why; as I seldom see them during choppy weather. I know it is difficult to discern the plume with white crested waves but tails and fins can still be picked out. But you seldom see them in weather with swell. Even in Alaska during the high season of August and September you do not see them that often in waves and swell. I wonder if they get sea sick, like we do, they are mammals after all. The moment we made the corner, we lost the cold current and the temperatures noticeably rose, almost as if we had flicked a switch. 69oF at noon time, 74oF at 4 pm. Tomorrow we will back to the low or high 80’s which is normally for the area.

I will be approaching the pilot station just before 7 am. and we should be docked 30 minutes later. We are scheduled to be the only ship in port and that means docking at pier 1. The advantage is that the guests are closer to the flea market; the disadvantage is that they are further away from Sam’s. Last cruise it turned out to be a main objective for a lot of guests to go Wal-Mart for shopping, so I wonder if it might not be an idea for the company to run tours there. “Ladies and Gentlemen: we are now offering tours so you can visit the Mexican version of: Sam’s, Wal-Mart and Home Depot”. It might even sell…..

The wind forecasts/osbervations: yesterday, today noon time and predicted for wednesday night. the red hot dot at the bottom is the Golfo de Tehuantepec. The  big area on the top, turning from brown to green is the Gulf of Mexico. Courtesy: www.Windfinder.com 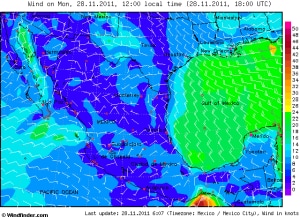 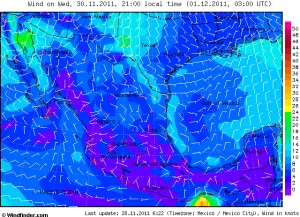