By 07.00 hrs. the ms Prinsendam was at anchor and commenced tender operations. Geiranger does not have docks, except for the small local ferries which maintain a regular ferry service inside the fjord. You can drive all around the fjord, sometimes along the fjord, sometimes high up over the mountains but it takes a lot longer than rolling your car on the ferry. I do not know if it is cheaper to do so but it certainly is quicker as long as the ferry timings connect with your personal schedule I suppose.  There are several anchorages available and today all but one were occupied. There is also one mooring location on the buoys very close to town and that is normally reserved for ships willing to pay and use the Sea Walk. This is a floating bridge system (The Sea-Walk) which abolishes the need of running tenders. It is a beautiful solution for the very large ships but there is a price to pay. Today the MSC Poesia was on these buoys and she was also the largest ship in the port with an on board capacity of 2550 lower beds or a maximum of 3013 when all beds are full. 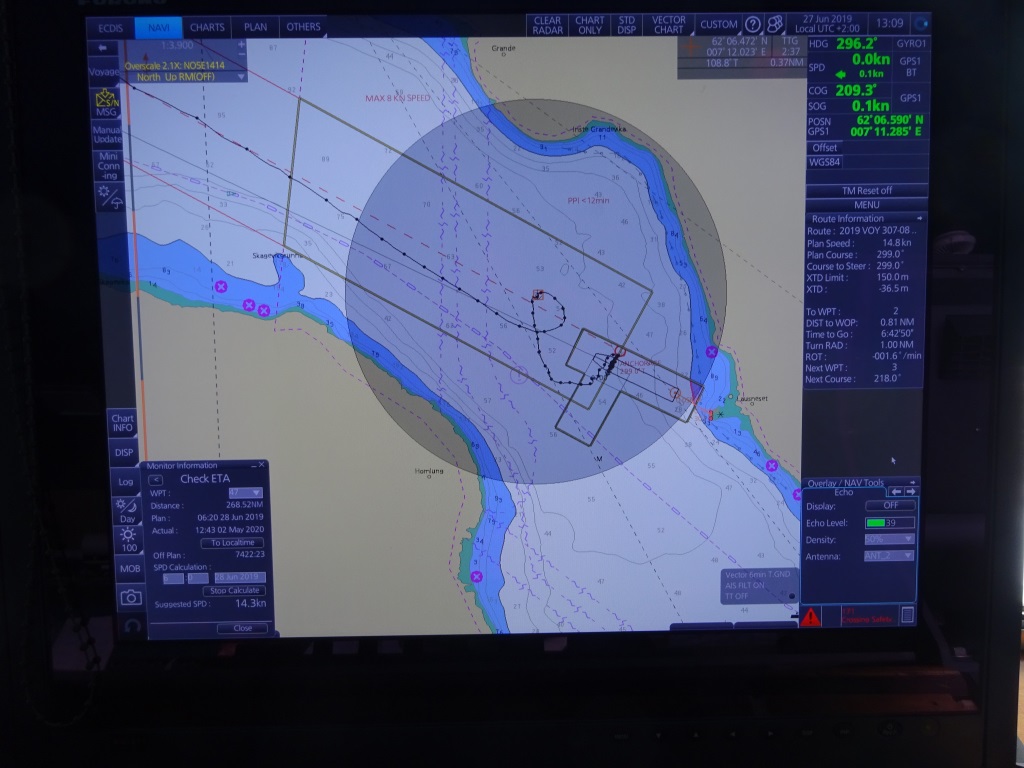 The ship at the anchorage /bollard at Geiranger. The dotted line  indicates the way the captain swung the ship towards the anchorage. the “box” is the path width where we like to keep the ship as there it is clear and safe from all issues.

. Mooring with the stern means that the ship is not turning on the wind and/or the current and the anchor keeps it all in deep water. A buoy or dolphin for the bow is not possible as the fjord much too deep here. 150 feet or more and constructing a dolphin for that deep would be difficult and very costly. Geiranger is most of the time wind still but a nasty blow can come around the corner and then having the nose in the wind helps to avoid most of the wind effect. Still the deck officers kept a close eye on the weather and if necessary would run to the anchor if the ship moved aft due to the wind on the bow pushing it back towards the rocks. 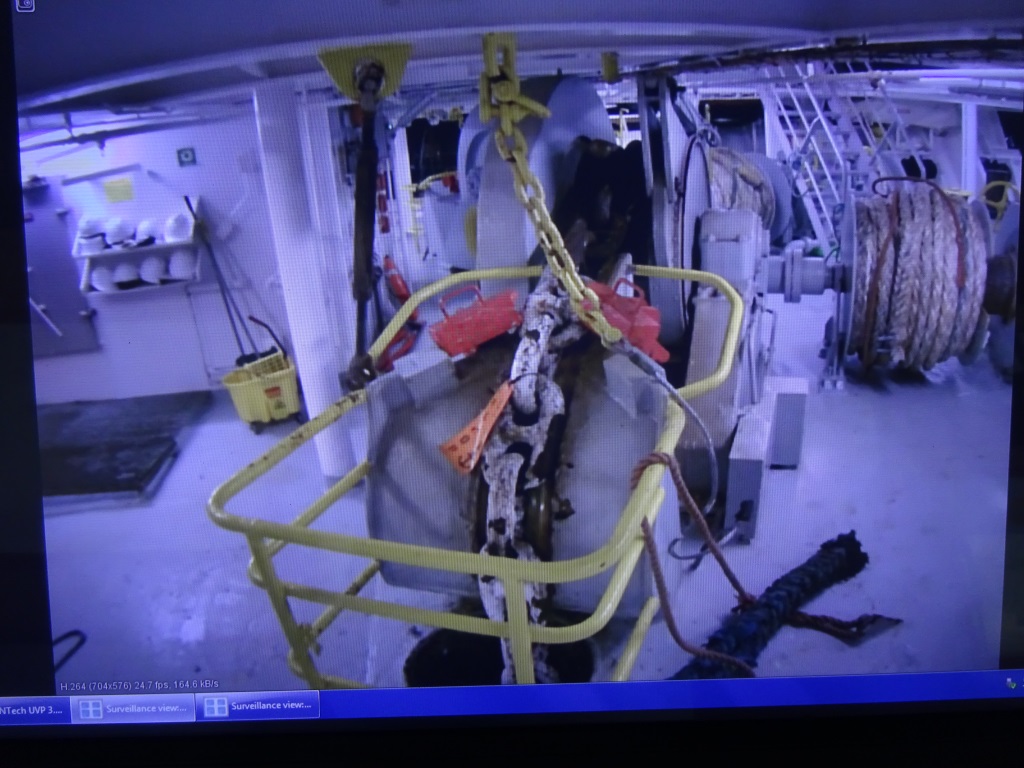 The anchor chain paid out as seen on the bridge monitors where the Navigation Officers keep a close eye on the stress/strain on the anchor chains.  We had 8 lengths of chain in the water. 8 x 15 fathoms or 8 times 27 meters. The water was 50 meters deep, that is two lengths, then one length of the foc’sle to the water line, and so we had an anchor with four lengths of chain laying on the bottom of the fjord which kept the ship nicely in place.  If you look at the picture, the white paint on each link s indicates the lengths of chain out. So 8 paint links  means 8 lengths of chain. the little orange triangle is the chain marker. If the chain would walk out (being pulled out by too much strain on the anchor) the little marker would disappear into the hawse pipe (the black round hole) alerting the navigators that something was amiss.

Geiranger itself is a very small town, a few houses up the hill and a large hotel. Through the years a lot of huts and small shops have been added to the tender dock area due to the increase of (large) cruise ships coming in. I have returned here every other year or so while on my ships visits and it is amazing what is now offered to the guests. In the olden days (read before 2010) there were only the regular bus tours going up to the top of the mountain and into the hinterland. Then more and more souvenir shops appeared and the Big Red Bug popped up. Now there are Zodiac (RIB) tours and even bicycle hire is available. (For the lazy bikers you can do a Fjord & Sky tour. A car takes you to the top of the fjord and then you can bike down, and let gravity do the job) 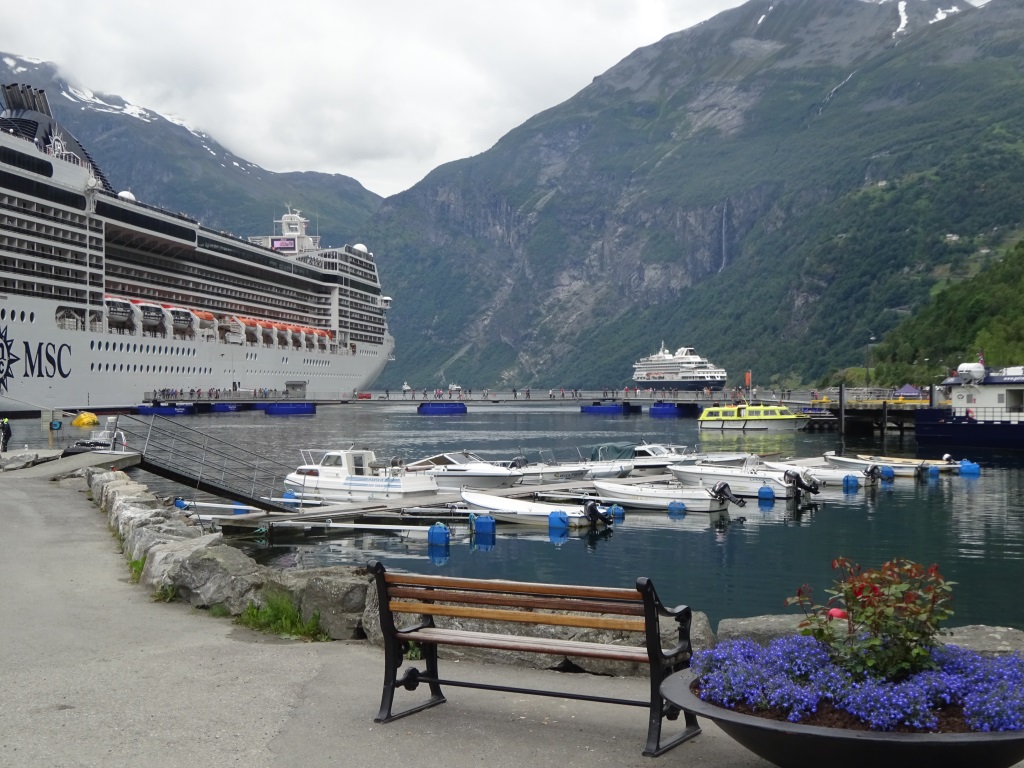 A busy day in Geiranger. In the distance the Prinsendam, to the left the MSC Poesia using the floating Sea-Walk bridge to shore  and in the fore ground the yellow tender from the ms Astoria.

What has also increased in size is the camper (RV for the Americans) camp at the foot of the Geiranger Hotel. Mainly occupied by Germans and a convoy of French. One sole Dutch camper was observed. During the day a never ending stream of camper vans arrived and departed. Not a bad way to travel through Norway as the infrastructure in the country is very good and there are ample overnight parking locations. I like the idea of this way of travelling but question the wisdom of it as they are very expensive (especially the big ones) to purchase and you can rent a lot of hotel rooms for that money. Still coming down the mountain this morning were at least 40 of them in a short period, creating a nice traffic jam when stopped by the outflow of the MSC Poesia guests who were either marching to the tour buses or marching to the souvenir shops without much regard for the fact that they were also marching on a public road. 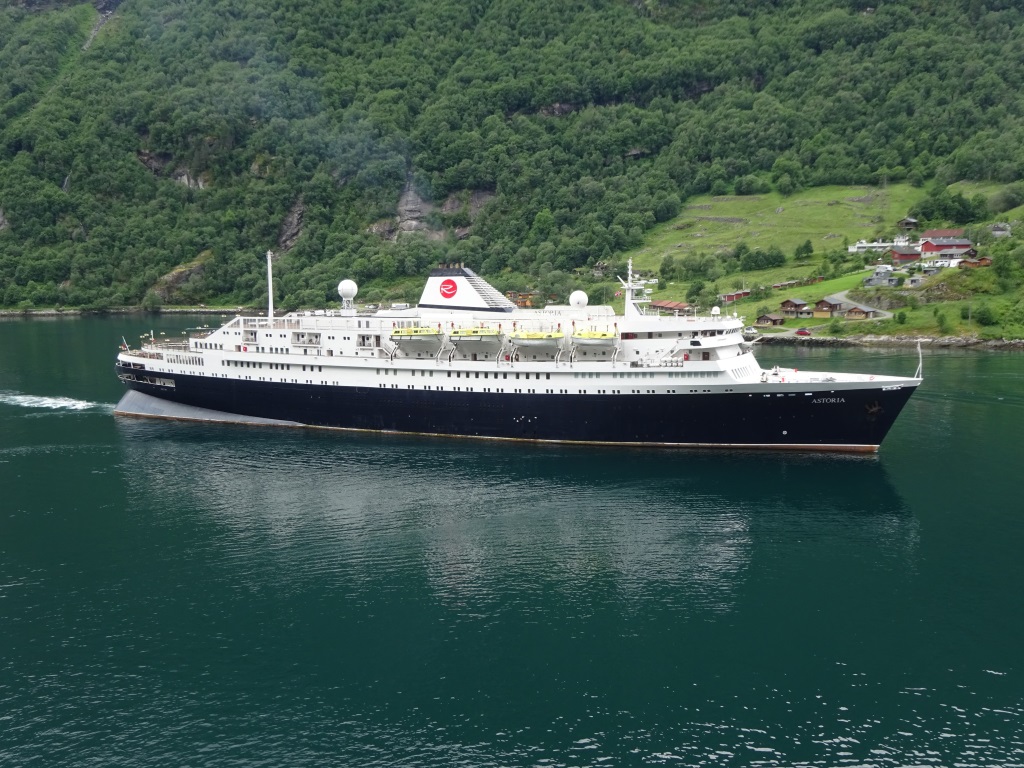 The ms Astoria, owned by a Portuguese company and currently in charter for a British company called CMV.

At anchor with us was a real blast of the past. The Astoria; she has been around in one form of the other since 1948. She was built as the ms Stockholm of the Swedish America Line and gained notoriety when in 1956 she had a head on collision with the Andrea Doria in dense fog out of New York. The head on collision saved the Stockholm but its ice strengthened bow penetrated deep into the side of the ss Andrea Doria which sank with great loss of life. What you see today has little resemblance to that original ship as she was completely rebuilt in 1992 with new engines and new super structure. That new super structure made it necessary to create the strange stern of the ship. A ducktail was added to improve stability to compensate for the extra and higher decks. Still she is very small, just over 15,000 tons and but carry 600 guests which makes her a very high density ship. But by operating in the 2 to 3 star segment she can still survive. 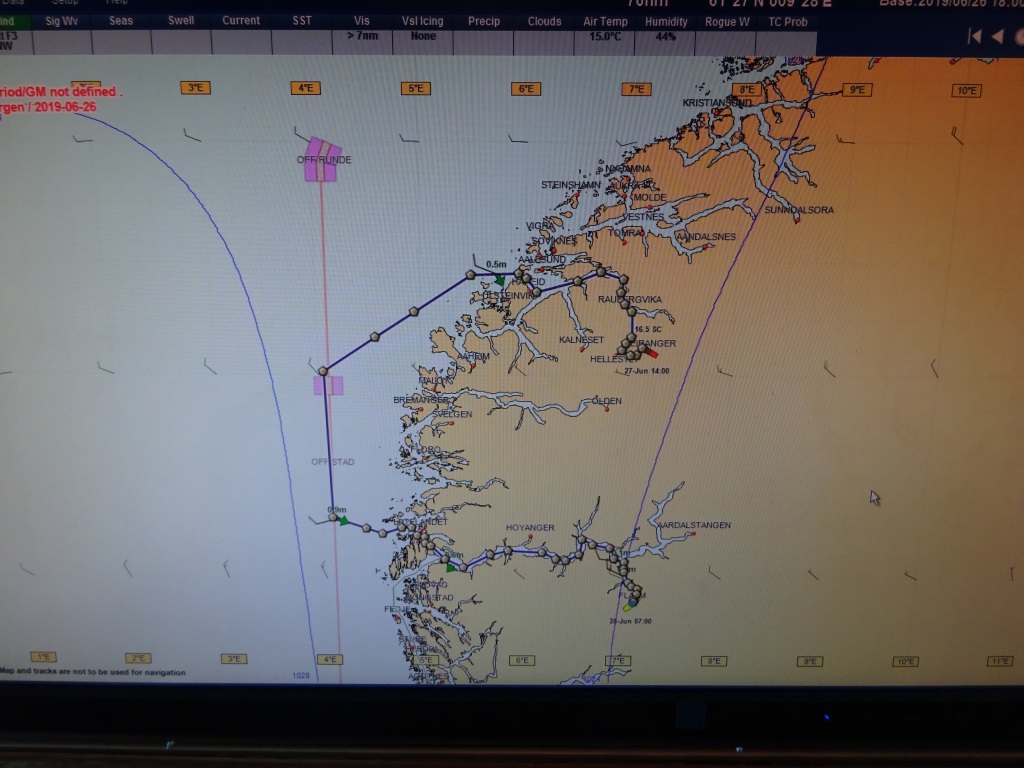 We sail today at 16.00 hrs. For a scenic departure from Geiranger and then sail briefly outside to enter Eidfjord to go to Flam. We are the only ship in, so we can happily dock right outside the rail road station.

Weather for Flam: Partly cloudy skies 70oF / 21oF no rain and no wind. A warm day for Norway,

First there is the Laundry Team, a group of crew no guests ever see as they really work in the dungeon. Ships laundries are always in the lowest part of the ship, as the washing and folding machines are heavy, and so is the weight of the enormous amounts of laundry going in and out, so it helps with the stability and also it is not an operation which needs day light or being close to the rest of the hotel operations.  On this ship the team consists out of 10 crew under the leadership of a Laundry Coordinator. 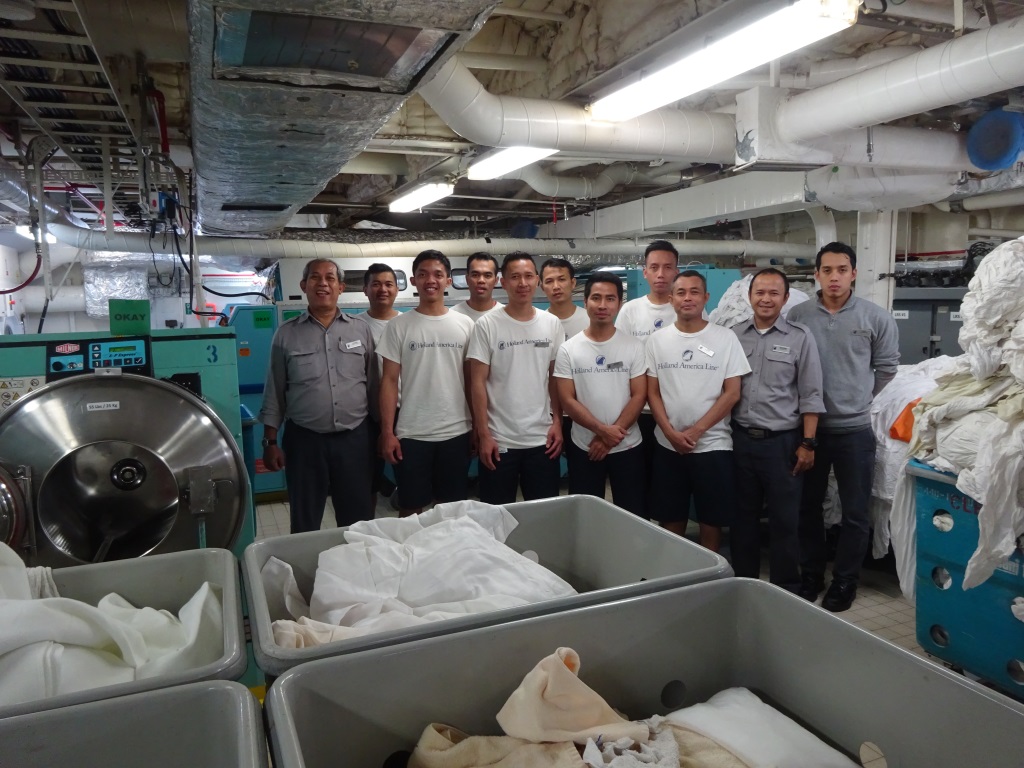 Secondly we have the Medical Department. They have their hospital or Infirmary on Deck 4 in the forward staircase. This group consists out of a Sr. Doctor (focus on the guests) and a Jr. Doctor (focus on the crew) ably assisted by two Sr. Nurses. In this group, the two doctors happen to be male, and the two nurses happen to be female. It is coincidence and also not company policy. I have also been on ships where the two doctors were female and the two nurses male. Since some years the medical staff is not temporary anymore but full time and most of our medical staff now comes from South Africa and the Philippines. As we have a lot of Asian crew it is always appreciated by the crew to have at least one medical person from their background on board as there are cultural differences in the way medical issues are discussed and approached.  And that goes for worldwide. I was once professionally present during a consult between a South African Doctor (who spoke more than fluent English)  and an American patient from the deep south and it was amazing how complicated the dialogue was in regards to the approach to a diagnosis. 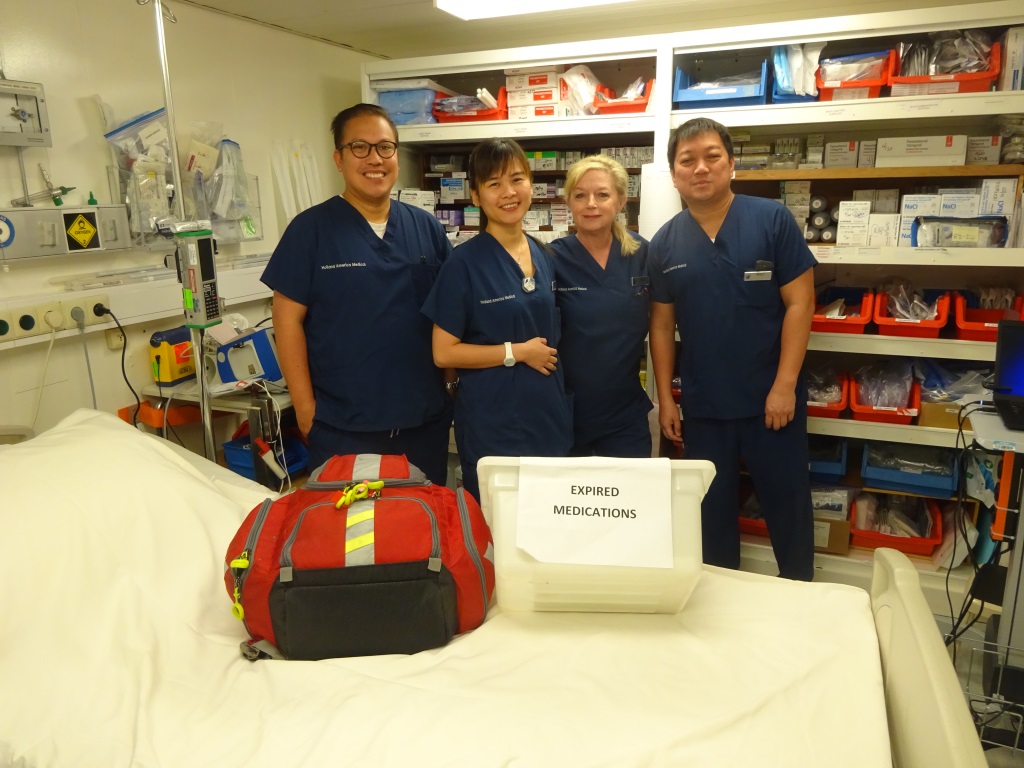 This is the medical team consisting out of two doctors and two nurses. They put the expired medications box out as they felt that by July 1 they would be expired as well, as the ship stopped sailing.