The weather forecast was right and it was a wonderful morning to arrive and to sail into the Volcano. Yesterday it was windy and tomorrow it will be windy again but today it was wind still.  Which helped the ships operation immensely as the only anchor spot in the area was allocated to another ship. This cruise ship the Celestial Crystal calls here much more regularly than we ever will and thus gets the better spot. But no wind means, no drifting and indeed the Prinsendam could float serenely in front of the main town. 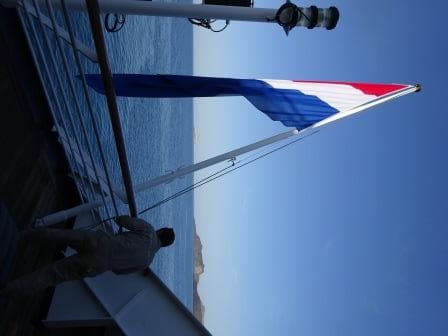 Holland Glory, a bright new and clean flag hoisted from the stern at 08.00 hrs, as per protocol.

Today was also the Kings Birthday in the Netherlands. It used to be April 30 when we had Queen Beatrix, who kept the National Holiday on her mother’s birthday (Queen Juliana) but when King Willem Alexander ascended to the throne he moved it to his own, 3 days earlier.

On the ships we have the tradition of Dressing Overall (or: Van Top Vlaggen in Dutch) This means more Dutch flags on display and the regular dressing flags out, which we normally only use during Embarkation day. So being the Teacher that I am, I went around with the sailor to ensure that protocol was followed.

The main fuss is always to ensure that we do not put a larger Nation flag up, than the flag of the country (Greece) which we are visiting bigger. That would not be polite and respectful. When not docked we normally do not fly a flag from the stern but today was a National Holiday and thus we got a new flag out of the locker.

Before we could go to Thira we first had to stop at 0’Athinai to send away the overland tour.   We have a tour going from here which will travel by coach over the part of the island to the east which you cannot see from the ship as it on the East slope of the Volcano rim. The tour then rejoins the ship at the main stop of the Santorini call which is a town called Thira (or Fira). 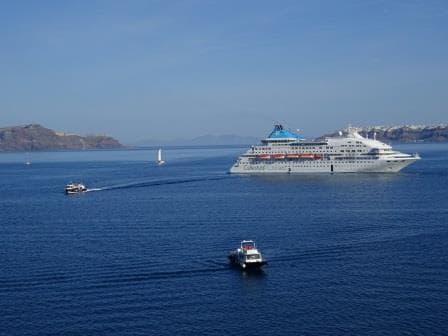 The Crystal on the only anchorage, a small under water bump rising up from a 1000 ft. In the foreground the shore tenders of Santorini.

Thus we entered from the West as O’Athinai is located on the southern side of the Island. Apart from having only one anchorage, there are no docks and thus we also drifted here. When we cannot dock we run a tender service with our own tenders. But here in Santorini it is compulsory to use shore tenders. There is an organization called The Boatman Union of Santorini and they take care of all the shuttle traffic in Santorini between the cruise ships and the shore side. None of us really minds that, as it saves the ship a lot of hassle, and if there are more ships in we do not have to fight over the tender docks. Now it is in the hands of one organization and they have to provide everybody with the same service as that is what they get paid for. 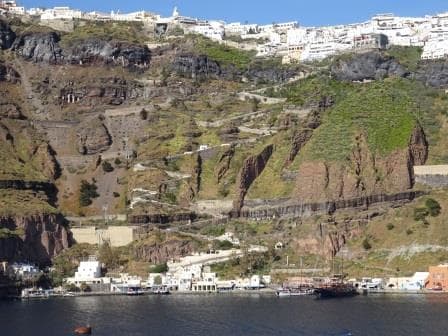 To the left the Cable Car system and to the right the zig-zagging stairs to the top.

In O’Athinai there is a zig-zag road going up the mountain from the little ferry port. This is not the case at Fira. There is a pier, called the Skala pier, and from there are stairs to the top. You either walk or you can sit on a horse and be carried up and down. Not a very satisfactory state of affairs but help came in 1979 when the Nomikos foundation paid for the construction of the cable car system. (Or funicular to use a very English word) Nomikos was one of the Greek shipping owners who made his fortune in the interland island ferry service which saw a great expansion right after the war. For many years he bought ferry boats which were too old for use in northern Europe and used them for their inter island service. It was not until fairly recently that the Greeks started to use purpose built ships for their services.

So now instead of climbing a lot of stairs, the Austrian built Cable Cars zips you up the mountain in 3 minutes. When there are a lot of cruise ships in, especially big ones, it can be a real Zoo at the cable station with long waiting times but today with only two small cruise ships in us and the Crystal, it was a pleasant affair. 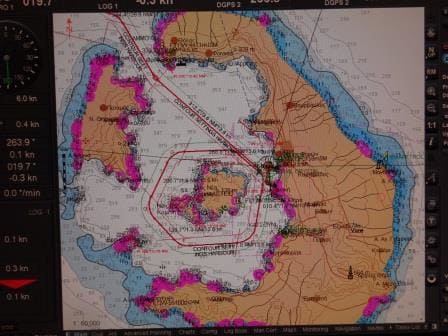 Santorini is a Volcano with a crater cone in the middle. And the ship = the red route, you can completely sail around it in very deep water.

So today was a great experience, sailing in and while sailing out with the sun shining brightly on the white houses at various locations on the Volcano rim.  For me it was a nice last day on the Prinsendam. My 23 days of training, instructing, facilitating and supporting have come to an end and I will now have a vacation until the end of May. Then it will be back to the ships but it is too early to say to which ones.

So for a while my blog will be intermittent but I once again hope to start adding more material to the historical side of the blog.  While at home I will be busy. My apartment building is having roof maintenance done and I as I am on the Board of Directors, my responsibility is the maintenance and thus I will be climbing scaffolding and scrutinizing roof gutters.

To all my readers thank you for reading my blog and if all goes well, I will be back by the end of May with daily postings.