The main reason we are in this shipyard is because it close to where we ended our cruise and because we need Crane capacity to get all the carpet and other spare parts on board. Thus yesterday, we imitated the local ferry and raced across the bay. Then in the afternoon the containers were hoisted on board, emptied and exchanged for new ones again carrying even more carpet.  Then there are the waste containers which get removed and replaced if and when needed. That whole process should be accomplished by late evening of the 27th. and then the ship can sail; and it will sail as soon as it can.  From then on it will have 3 full days at sea to finish off all the work on board.

The last time I docked in Tacoma was in 1980 when I was a cadet on board a container ship of a company which was once the Hal cargo side. Holland America sold off its cargo side in 1973 when it had to make a decision between investing in expensive cargo ships (= container ships) or also expensive cruise ships. I came over to HAL when I had obtained my license. Being a cadet on a cargo ship is much more hands on than on a cruise ship, as a smaller team means that the cadet is given much more responsibility.  I do not remember much from those visits except that it was always cold there. 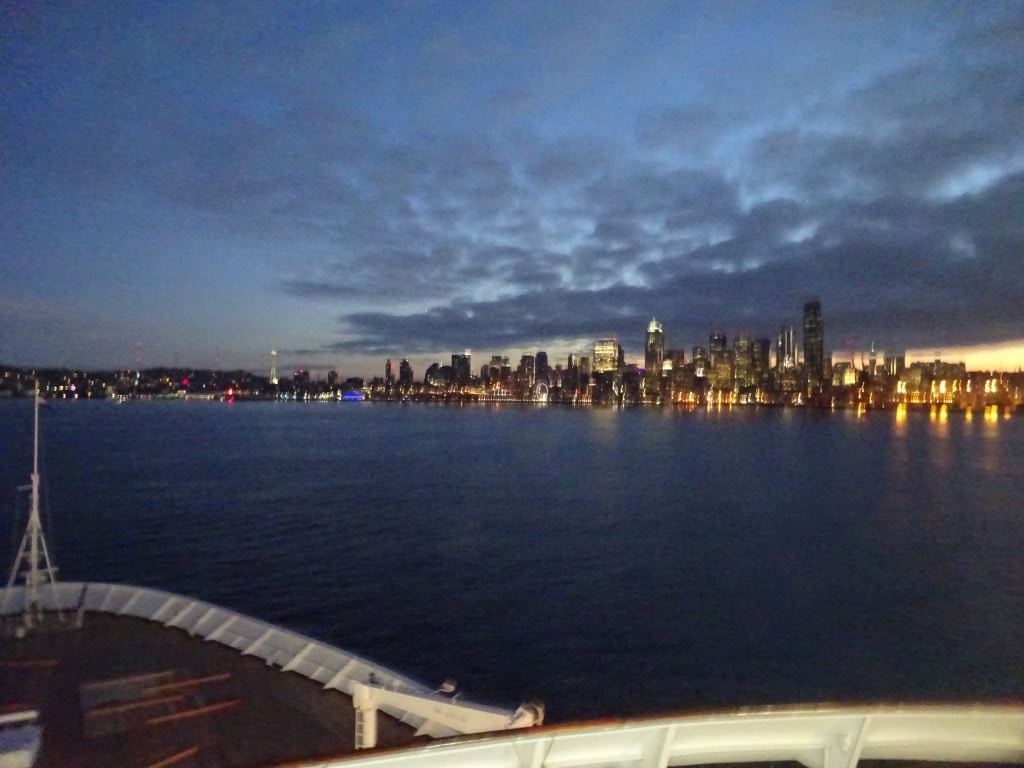 Now we are docked a bit further in the Bay and from the bridge we have a spectacular view of the skyline of Seattle, especially as we had a very nice and sunny day. 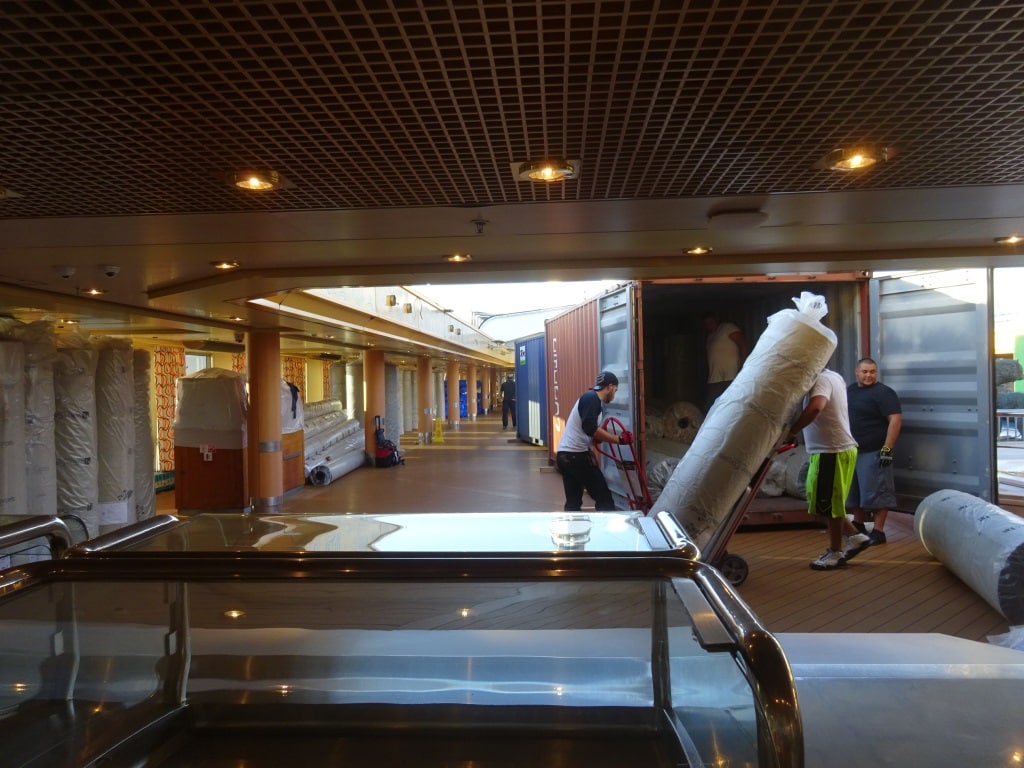 Arrival of the Carpet. Containers landed on around the Lido pool,

Life on board goes on in full swing and today the replacement of the potable water pipes started. That meant we were out fresh water everywhere, except in the Galley, for the whole day. We of course need water during the night hours and thus the replacement sequence is carefully planned. All pipes are laid out in the corridors and the ceiling (what we call under decks) is completely prepped for the exchange from old to new pipe. About 20 fitters work in one corridor at the same time to ensure that the replacement gets done in the allotted time and that testing is done before the full pressure comes on again. And indeed by 17.00 hrs. we had our water back. This process will be repeated in the coming days until all pipework has been renewed. 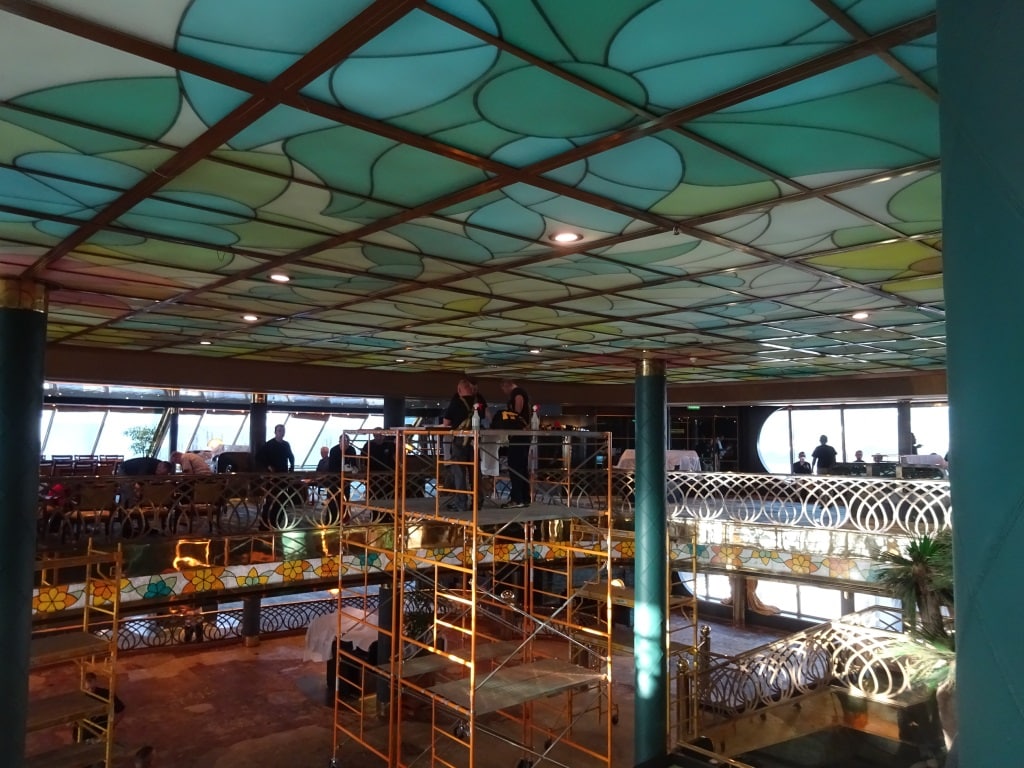 High work going on in the Dining room. all the carpet has been stripped for renewal as well.

It is not all carpet, pipes and furniture which has the attention, complete scaffolding has been setup in the Dining room to clean and inspect the glass ceiling we have there. The ships crew can clean the glass to a certain extend by dusting it but a detailed clean with soap and water is difficult if one wants to avoid damage. Thus we have a contracting company doing that. Another item is fresh wall paper in a number of cabins as well. For that reason one of the penthouses has been given over to a wall paper man. 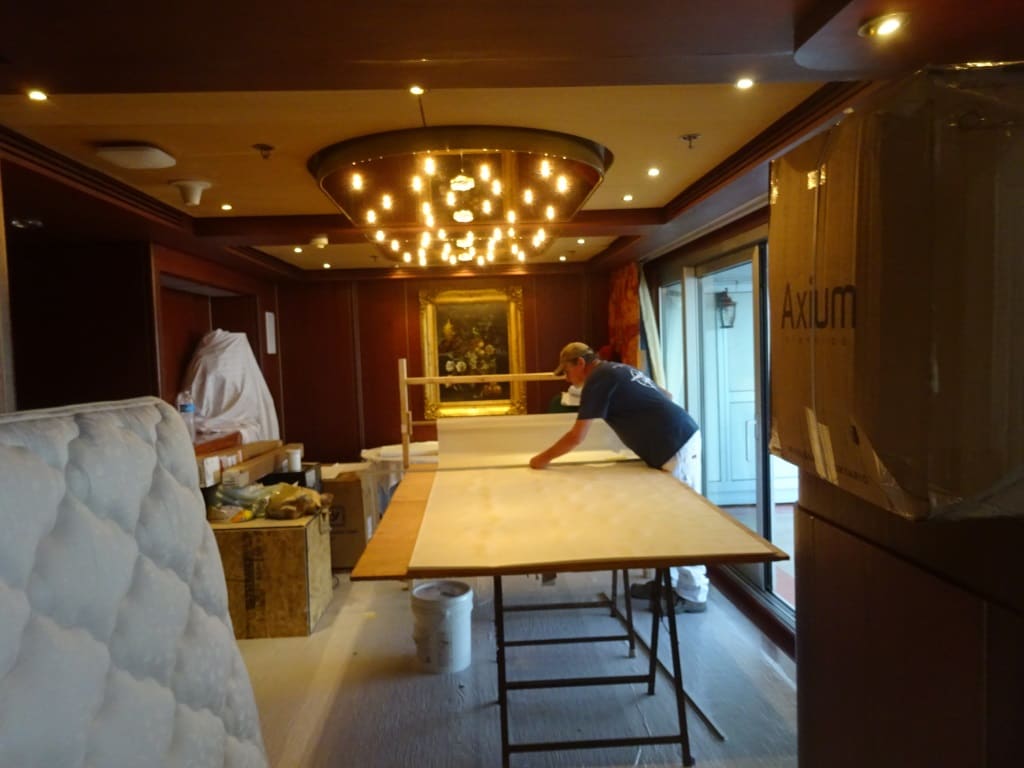 A very posh wall paper man. He is not just using a cabin, no he is using the penthouse. (I wonder if he realizes he is working in front of a very expensive 17th century painting)

The crew is involved with all sorts of things, apart from supporting the needs of the contractors and doing their own work, a large number are also involved with trying to keep the ship as clean as possible. So as soon as carpets and underlay have been fully removed a whole Armada of sweepers moves in to make the area dust free. This is not limiedt to one group and this morning I saw Cooks, Waitresses, Housekeeping and a gentleman from the Front Office all busy with a broom to get rid of dust and small debris. And until the new carpet is down, they will have to repeat that every morning. Then the fight against the teak deck people will start. These gentlemen have now started with sanding the teak wood around the swimming pools and that creates dust everywhere. If it is wind still, then the dust stays where it is, but late this afternoon the wind started to pick up and that meant…………….

That wind is supposed to die down again during the evening. Tomorrow we are expecting a sunny day with noon temperatures of 24oC or 76oF. and that is supposed to last until we sail and even beyond.  The people of Seattle must wonder what has hit them. Summer in September. Maybe because we are in town ?? 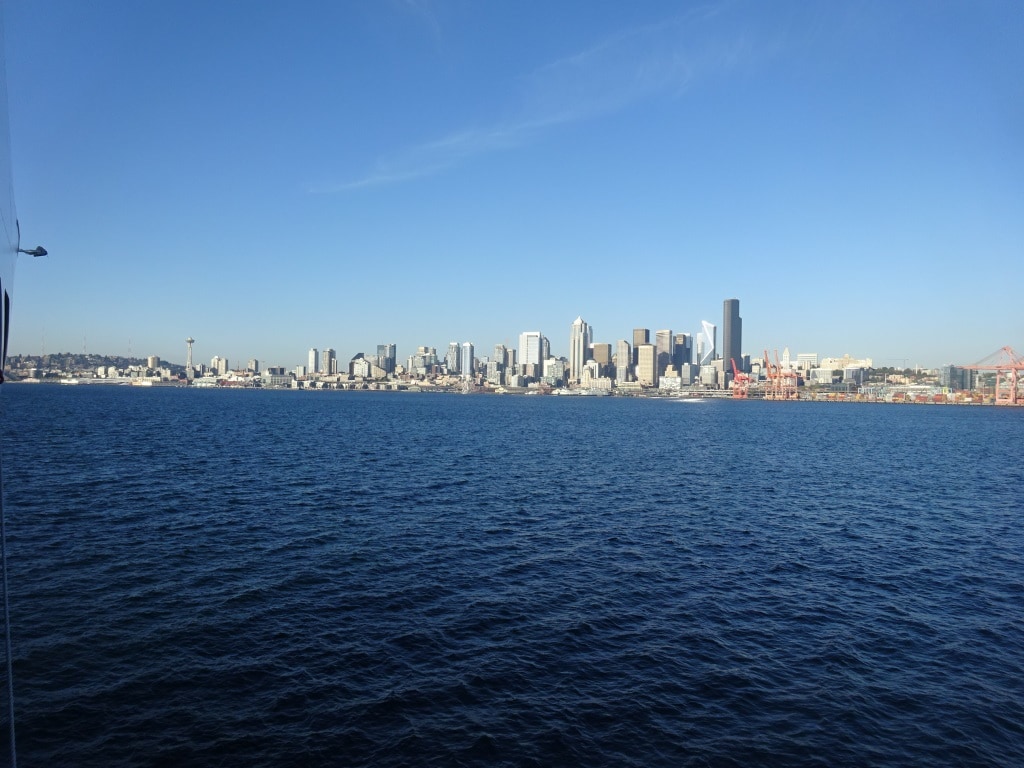