The ship is nearly finished and at the moment we have more Fire and Security Patrol people on board than workers. Yesterday there was even more security when we had all the local guests on board. The last group of them left last evening and hopefully they have been suitably impressed with what Holland America ordered and what their family members constructed. 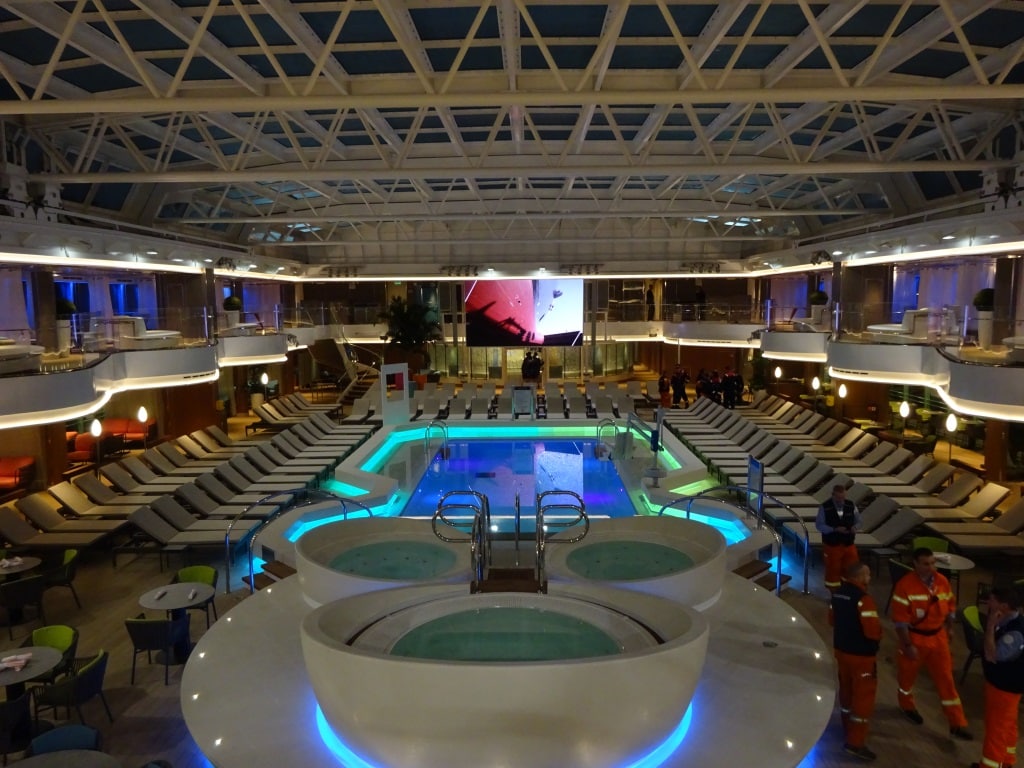 So we are back to ourselves and with ourselves we mean 1032 crew, which include a few people like me, who live with 2 feet on board but who are not part of the regular crew list. Then I estimate that there are about another 200 specialists and support groups on board who have to install, or finish a very specialized item and these people come and go depending on the project. Our piano tuner (he was here again today and has now progressed to Billboard on Board) is one of such specialists. 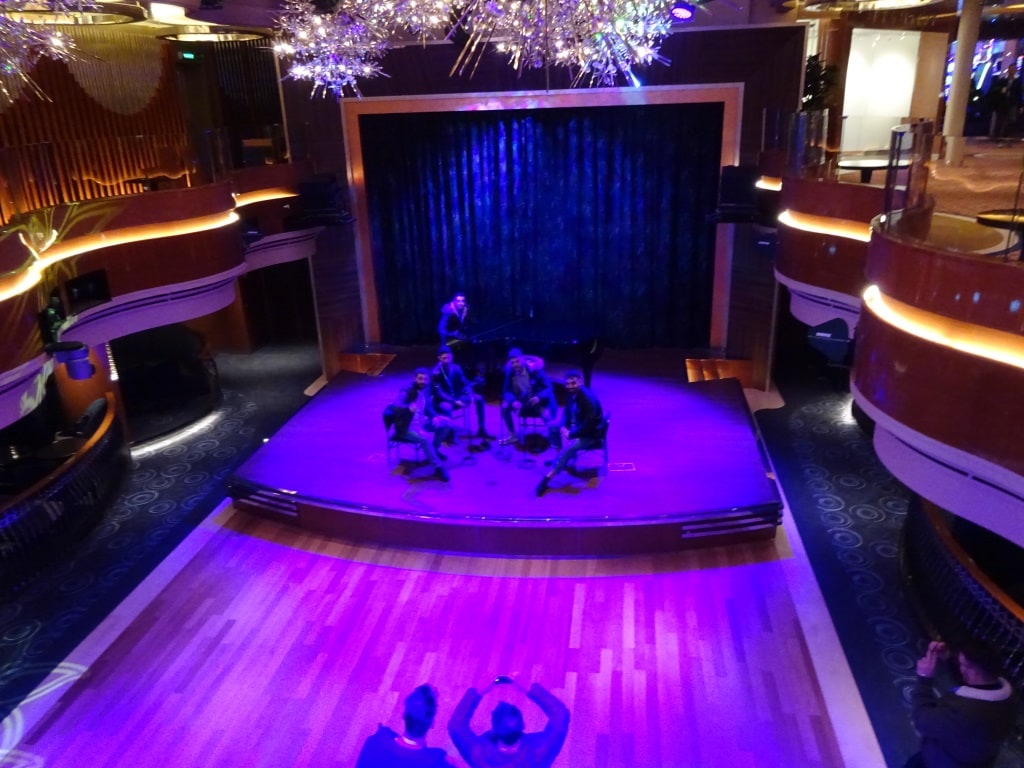 The Queens Lounge also completed. This is a mock up of how the stage will look like with the Lincoln Arts Center classical music on stage, before it becomes the BB King Jazz Club. The A/V guys threw some fancy lighting in as well.

I had a question in the comments of who the Cruise Director for the maiden voyage is and I only met him yesterday. Although already longer on board, he spends his drill time on the bridge assisting the Captain. With all these drills going on, everybody runs around making it happen and my position is then running around the ship as well, to ensure that everybody is running the right way. thus I did not see him until very recently. But his name is Ross McTaggart and he has been around a long time working for the company, holding various functions in the Cruise Staff Department. And now as the first C.D of the Nieuw Statendam.  The Cruise Director’s function is to be the front of the house person and in that way he/she is present where ever something is going on. Then there is the back of the house person by means of an Entertainment Coordinator. This person schedules all the activities and entertainment that is going on in the ship. And with all these happenings on the Music Walk that is not an easy job. Moreover as there are entertainers involved and that gives High Drama even at the best of times. Then there is an Assistant Cruise Director, five youth staff to man club HAL, a Digital Work Shop Host (the person for the computer lessons), 17 crew for back stage and audio /visual activities and the Cook for America’s Test Kitchen. Although the official title is Host, not Cook. This person falls under Entertainment and not under the Kitchen staff as it is a front of the house = guest focused activity. I assume what the Chief Cook does with his team is more stomach focused………….. 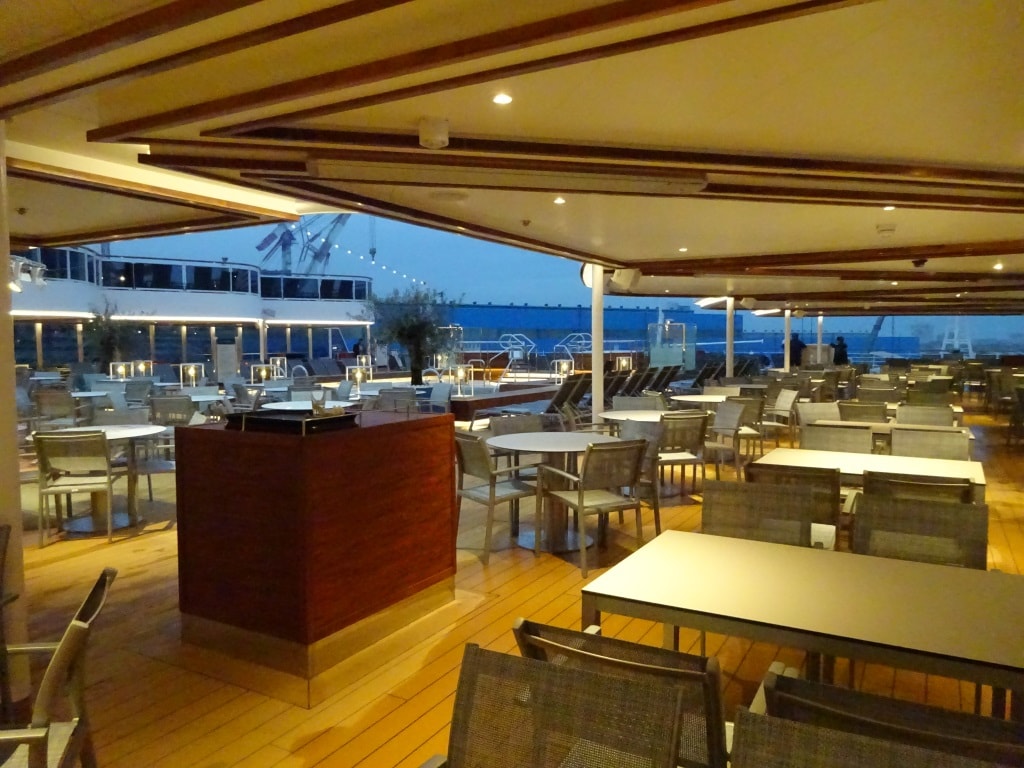 The Lido deck aft outside. Or officially called the Sea View Deck. Not really the place to be at the moment too cold and too chilly but it is ready for business.

We now have USCG on board who are involved in pre departure checks before the ship sails. The USCG is a Port State Inspection as most countries have. When we are in an American port they come on board to conduct a CVE or a Control Verification Examination. There is one a year where they do an in-depth inspection and there is the 2nd one, when they just do spot checks, a walk through of the ship and the emergency drills. There are a number of checks that you really cannot do during an inspection in a turn over port and for that reason we invite the Coast Guard to come to the new build.

Tonight we will conduct a full blackout and then we see what still works, and what has to work is indeed still working. Black outs on cruise ships do not happen very often but sometimes, if for one reason or the other, there is a power surge and a second engine does not come on line automatically, the engine load goes too high and the engine shuts itself down, and then the lights go out. Not dangerous but very inconvenient. However during a real emergency, let’s say with an engine room on fire, some power is still needed to keep the ship safe. Nowadays most of the larger ships have two engine rooms, separated by a fire proof bulkhead so the chance is very, very small but the regulations are still there. The most important item to test tonight is to see if the Emergency Generator (see one of my recent blogs) starts up automatically within 10 seconds and if it then powers a whole list of machinery which is important during an emergency situation. As an example the Elevators; required is one elevator in each staircase but Holland America has them all on emergency power. No lights in the cabins but there will be limited lighting in the hallways and the public areas. Also we have nowadays (not legally required) some spare power for keeping some AC, Cooking and the Toilet Systems going. 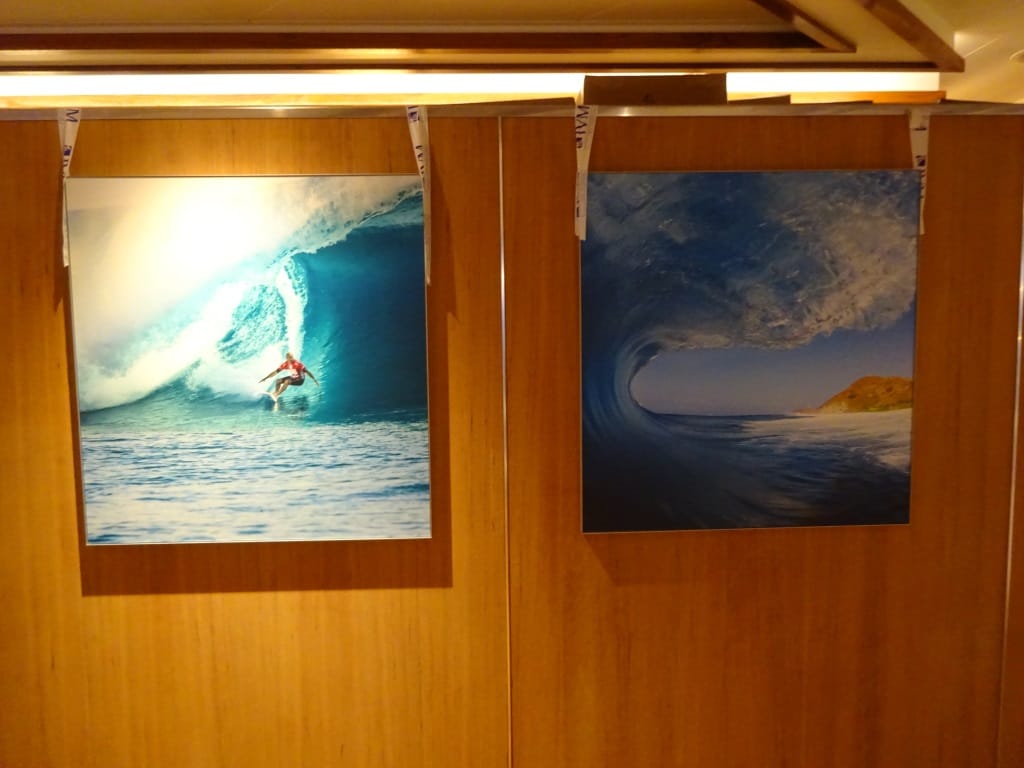 The theme of the Sea view Deck is The Sea and surfing so there is “Surf Board ” art around and today they were adding some wall pictures also with Sea and Surf.

For this black-out happening all crew will have to leave the ship for 2 hours and the Yard is going to show a movie in the cafeteria next to the ship.

I expect we all have to march through the rain again, as although it was dry part of the day, we are expecting more rain again tonight. But that should be the last rain for a while. During the night it should all move away and the long term weather forecast gives 7 days of dry weather in a row.