Today while it was a rainy day, it was also visiting day for the Yard. It seems to be a sort of tradition for when the shipyard is delivering a ship that the families of the yard workers receive an invitation to come and see what has been constructed. Starting from late morning until late afternoon large numbers of families came on board in groups, could walk around and were then surprised with a light and dance show in the World Stage. A “spectacolo” it was called by an Italian Lady who was making announcements to get all the visitors to the Main Stage and later off the ship again. I had a quick look inside and it was indeed a spectacle with a dance group who danced in the dark and then the light effects made them visible. With our 270o LED screens all around the audience is was quite impressive and also quite loud. The speaker system worked very well. 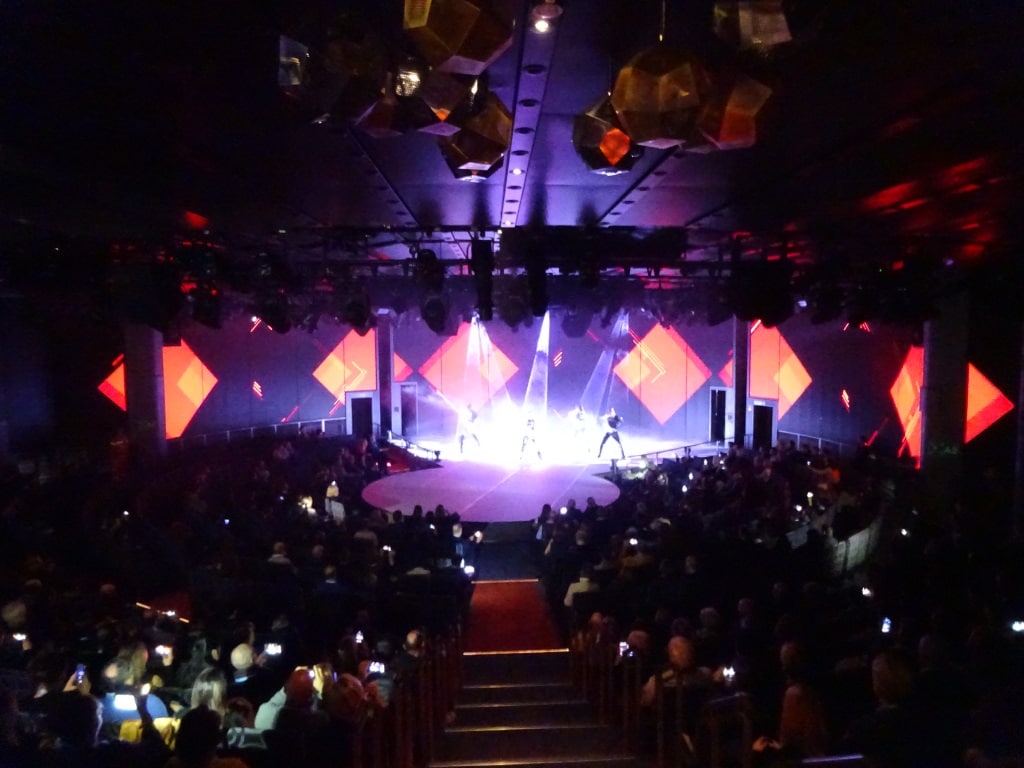 The “Spectacolo” in the Main Stage. Very difficult to take a picture of with a simple camera. But I caught the 270 degree wrap around screen to a certain extent.

For that reason the Lido Restaurant was closed today for the officers and staff as the yard has requested food (read pasty) outlets and the ship happily helped out. Instead the Dining room was open all day for us giving the stewards at the same time to chance to polish their skills a little bit more.  As is the same for the guests, the dining room is wonderful but it is not good for the waist line. Hence my personal preference where I can keep the number of calories a little bit better under control. 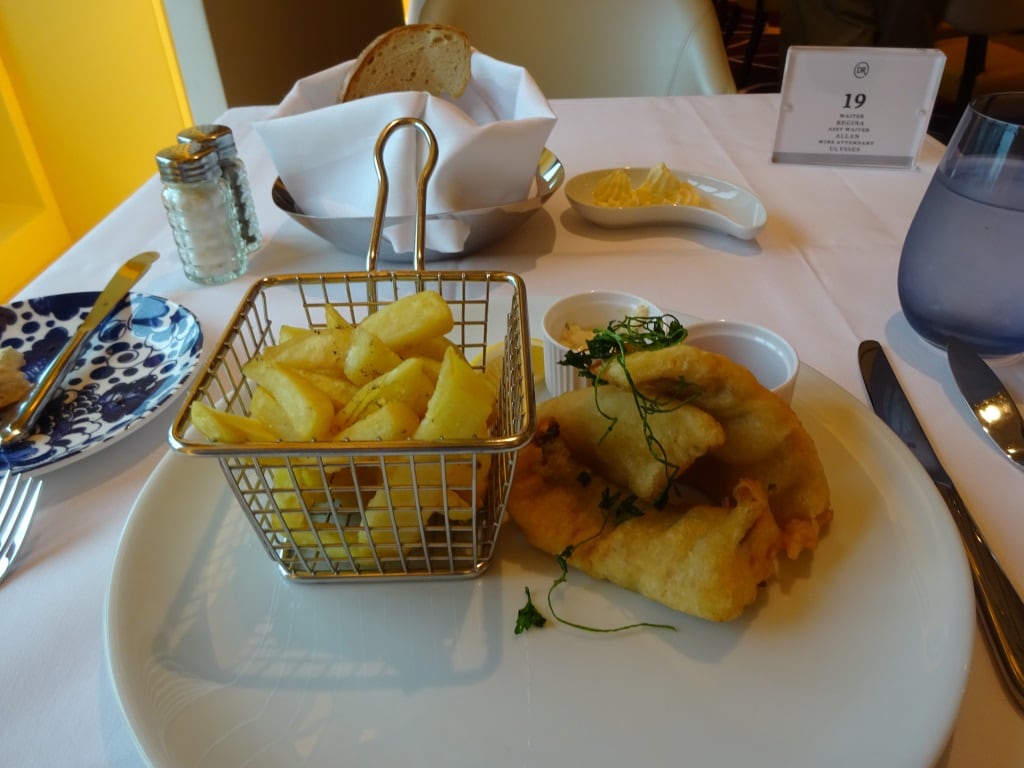 With no Lido available I went to the Dining room for lunch. After having lived for 26 years in England, I can even appreciate the local cuisine once in a while. This is the Holland America way of presenting Fish and Chips. (With vinegar on the side for the purists)

Our Holland America Line Crew was in full swing with cleaning the ship from top to bottom and more and more inventory arrived in the cabins. Today my cabin received a laundry bag, glasses and blankets for the balcony chairs. As far as I can see the only thing my cabin is still missing is a trashcan and a fruit bowl. So we are getting there. Every day more boxes are popping up with goodies to supply.  And for the rest, cleaning, cleaning and cleaning. Today was the day of the Vacuum Cleaner. Henry’s everywhere.

Because the yard people were not working we had a quiet day with the P.A system, apart from the occasional announcements by the Italian Lady about the “spectacolo”. For the last 10 days we all have been exposed either to either loud music or to constant announcements with “test, test, P.A test” or “test, test Muting Test”. All in various versions of Italian and English. Apart for Guest announcements the P.A system is also important for the safety of the ship. And as such an emergency P.A system is required under the SOLAS regulations.  We also have two systems, one for the whole ship and a 2nd one for the lifeboat and life raft stations only. So outside on Deck 3 there are two speaker systems, just in case the regular / normal system would fail. However that is easily tested as there are not that many speakers and it is all outside., nobody notices it very much.

The regular speaker system is much more complicated as it has to work everywhere and it has selector switches for certain areas. Holland America normally does not make announcements in the cabins and that means already one option to filter out. In that way we have about 10 different areas which can all by combined or separated. Then the Main Stage is a separate challenge. It is not a nice situation if an entertainer is in the middle of his/her act and suddenly the bridge comes blasting through with an announcement about “Whales on the port side”. From experience I can tell you, the whales will win. Thus the show lounge can be muted. But the system must have the capability to override this muting function in case of a real emergency…………. when we press the ALL CALL.  To figure that one out, and to see if all speakers are following suit, the whole ship has been exposed all week, to Test, Test, Muting Test. 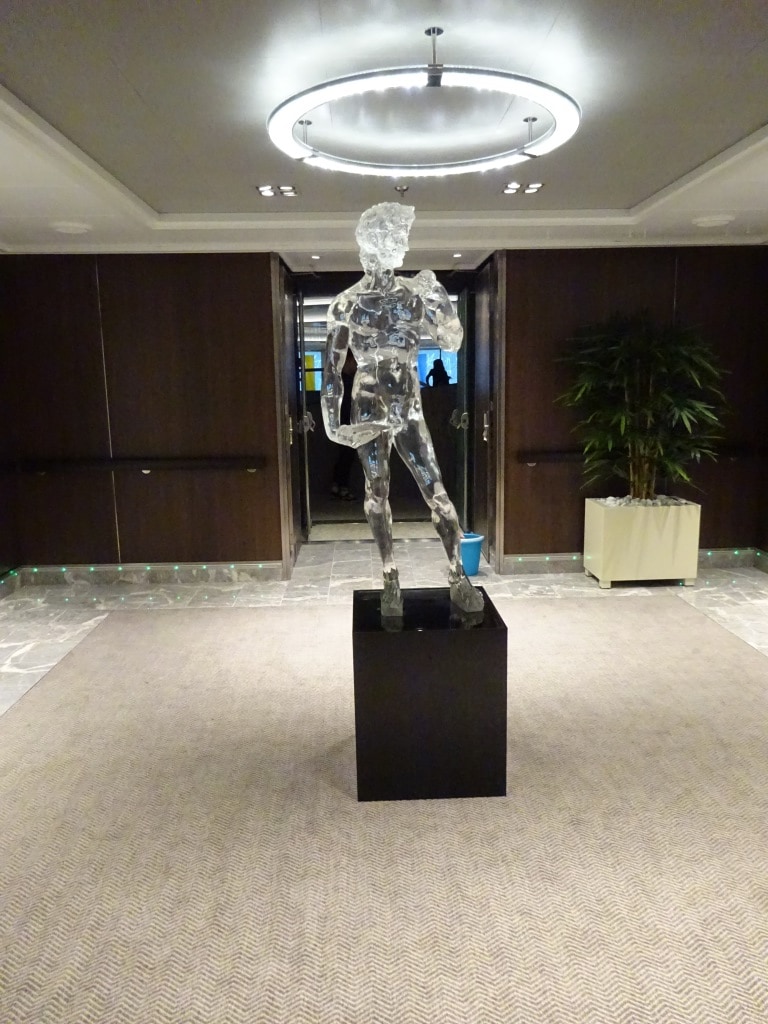 The Statue outside the Green House Spa on Deck 9. Please scroll down to the end of the blog to see what he is holding in his hand.

Some days ago I posted a statue standing outside the Green House Spa, still wrapped up in plastic and waiting for an unveiling. Well the plastic has come off and the statue is a see through version of a very famous Statue. I will leave to the cultural experts among my readers to figure out who made the original and what it is called. But as art on the Nieuw Statendam falls under the headings of Music, Whimsical or both, this belongs to the “whimsical” department. Just look what is in the left hand ……….. and this is real.

Tomorrow the yard will start buzzing again and the weather will remain un-stable. Not much wind so it will not be too cold but with a chance of showers in the afternoon. It might help the deck department with cleaning the outside decks a little bit. 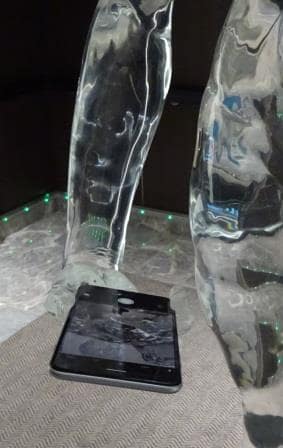 This is Culture with a twist. Hopefully it will make the Guests smile.