The bad weather up north intensified and created winds of up to 75 knots under the Aleutians and that meant that the “ripple effect” came further down than was hoped for. So we caught the tail of that whole weather system. It started in the morning with 25 knots of wind from the South West and thus blowing against us. We are still on our straight course of 254o heading directly for the big Oahu and that meant we had the wind fine on our port bow. Then by lunch we had the tail of the frontal passage coming over which brought some strong showers. It made my Staff Captain very happy, as it washed all the salt away, but he was about the only one who could smile about it. During the passage it breezed up to gale force winds of 35 knots, but it did not last long. By 2 pm. we had left the rain behind us and the wind started to veer to starboard.

In the next 24 hours it should move all the way around and then start to give us a gentle push in the back. That advantage might be offset though by an increasing swell which I expect to pick up late this evening. The weather chart indicates that it will go from 8 to 12 feet and that is just enough to make the ship rock. Hopefully it will be over by tomorrow evening as we have a big ball organized in the Showroom at Sea. It did not deprive our guests from enjoying themselves during the day. The activity program is nowadays so full with items that you would need another vacation to find some rest, if you would have attended, day after day, all the ship activities that we have. Most of us love sea days as well, as we can finally get through piles of paperwork and write off loads of compliance checks and also do some extra training. Apart from being useful and important, some stuff is just plain fun to do. 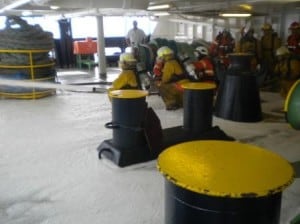 Applying a layer of foam to the deck.

Today the fire teams had the chance to mess around with foam. We have a lot of foam capacity on board, fire engine room fires, for helicopter crashes, or just plain to protect the ship if we would be in a situation that burning oil would drift towards us. Using foam needs different tactics than regular fire fighting. When using water you try to extinguish the fire by lowering the temperature of the burning material. With foam you try to smother it by cutting off the access of oxygen to the source. 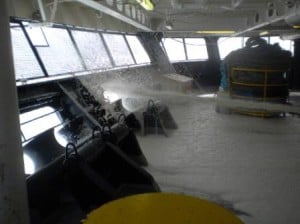 Take the ships bulwark as the imaginary fire and you are in business. Please note the Anti-Piracy Gates above the openings for the ropes.

We cannot always train with foam as it makes quite a mess, but today we covered the aft mooring deck under one white foamy blanket. The foam that we use is not harmful to the environment and thus it can be washed over the side without having a detrimental effect on the sea.

The fun part is that, whatever age the crew might be, nobody can resist it to turn the hose on each other and by the end of the exercise a good part of the deck and a good part of the participants were covered in the white stuff. I had by then departed from the scene, as it is not uncommon that a hose “suddenly and un-expectedly” veers off and into the direction where the captain happens to be standing. All by mistake of course.

In the meantime I worried about our arrival time as adverse winds and swell do not help me with keeping my schedule. We still have two days to go and I can only wait to see what the weather is going to do. The chief engineer is keeping the engines running full out, the navigators are making sure we stay exactly on the best track line and for the rest it is in the hands of Mother Nature. I will probably repeat that mantra a few times, as the Pacific Ocean, does not always want to be that peaceful.