Dakar is a major deep water port located on one of the most western points of Africa. It has always been an entry point for all sorts of commerce going to and coming from Africa and has about 30 docks available that can take most of the world size ships. It is fairly sheltered from the sea and as most winds are North East or South West the majority of the large docks are situated that way, so that it is easier for the ships to dock. As it had been windy in the past few days, with little sign of getting less, I had set my ETA for 06.45 with the eye of being docked by 07.15, so that when the wind increased after sunrise I would be happily tucked away in the port. And with that plan we approached the pilot station. We made our mandatory call to Port Control who confirmed our ETA and advised that the pilot would be boarding upon arrival. So the whole arrival machinery was put into action and everybody went to stations. All went according to plan, with one exception, no pilot. Not exactly a minor detail as Pilotage is compulsory in Dakar which means I am not allowed to go in without one.

Thus while the chief officer tried to get out of the pilot station what was going on and when the pilot would board, I kept the Prinsendam floating off the port entrance. That kept me fully occupied as in front of me was a sort of fishing boat, of reasonable size, who managed to get in the way four times in a row. First he came from starboard, so I stopped the ship as he had the right of way. Right in front of me he turned north, so I could continue slowly moving to port in the directly of the port entrance. As soon as I started doing that, he came to port as well and proceeded to cut in front of me. Thus let’s wait, As soon as he was past, I slowly continued only to see him making a 90 degree and then to cut in front of me once again.  By that time I decided to wait and stopped the ship completely.  He then proceeded closer to the port entrance and stopped there right in the middle of the fairway, where I would have to go eventually. That going there, took another 50 minutes as that was the delay of the pilot. So it was not until 07.40 that the pilot finally came onboard, rather startled about the cold reception he received from me. 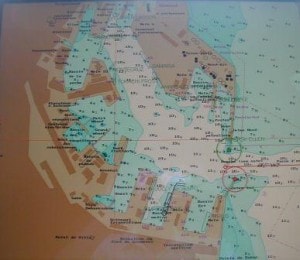 The harbour of Dakar. Deepwater and plenty of space to maneuver in.

Now the challenge was, to get into port as soon as possible to minimize the delays for the tours. However it was now half an hour after sunrise and the wind started to pick up in strength. Luckily it came from the NNE and thus was blowing straight in line with the dock. That would mean that as soon as I would have the ship lined up, she would not drift sideways anymore. I did not have that much room for drifting as there were ships docked on the other side. So we raced in, swung to port, lined up, and slid into the slip and by 08.10 we had our gangway out. The Security Officer ran off to get the authorities onboard as quickly as possible and as they were obliging, the ship was cleared very quickly and we managed to keep the tour meeting time delay to just less than 20 minutes.  I had a little go at the pilot when we were safely docked, explaining to him how much it would cost his city if I had to cancel the tours because of the delay. 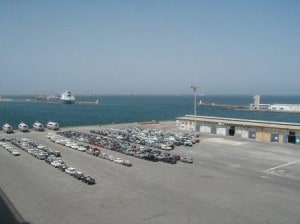 Although the port is large, there is no dedicated cruise terminal. Thus we docked at the Ro-Ro berth. In use by car carriers bringing in the new cars. The space gave ample room for parking our tour buses.

I do not know if the pilots discussed my complaint among themselves but on departure the pilot showed up 15 minutes early. Although the wind was blowing still very strongly, the harbour basin is very large, so I could go astern quite a ways, before having to line up. There was room to drift until I had enough speed going to be not affected by the full force of wind force 6 on the port beam. 10 minutes later the pilot was off and we were on our way to our next port of call: Santa Cruz de Tenerife, two days from now.

It will remain windy during that period. There lays a ridge of high pressure over the Azores and a low pressure system to the South and we are going to sail straight north into that flow. Wind creates waves and thus it will be a bit wobbly. Not really bad weather but still a wind force 7 to 8 at times. Luckily we do not have to sail that fast, so the Prinsendam can ride the waves instead of having to pound into it.