As planned we arrived at the fairway buoy at 04.30 in the morning and slowed down to 10 knots. That brought our squat down to about a foot (At full sea speed it can be over 10 feet in the stern) and then we followed the buoys over the shallow estuary. It is 20 miles from the fairway buoy to the dock and thus it took us 2 hours to travel this distance. Contrary to previous information received (Br. Admiralty sailing directions), all buoys were in position and all but one was also lit. That made life a lot easier. So with taking frequent bearings off the land, we sailed over the bar while keeping a close eye on the depth. We had calculated that the minimum depth under the keel should not go below 1.5 meters and with a lowest observation of 1.6 meters (just over five feet) we were not that far off. The pilot station is about 3 miles north of the town but we quickly found out that he prefers to board just before docking. Although we were here in the dry season, there was still a strong current running and together with an even stronger wind it was quite a challenge to bring the ship to the dock. However the compulsory tugboat helped out and by 07.30 we were happily docked.

We were not the only cruise ship in port, just after us the Corinthian arrived. With her blue hull and white superstructure she just looked like a miniature HAL ship, but she is not. Built as (Renaissance 7) one of 8 of the first series of Renaissance ships, she now sails for Travel Dynamics with educational cruises all over the world. Tomorrow she will be with us again in Dakar. Still it was a nice change for me to see that for once we were not the smallest cruise ship in the port. The days that 38,000 tons was a large ship are well and truly over and most of the time the Prinsendam is now sitting somewhere hidden behind an Apartment of Seas. Not today. The very large ships are not yet calling at these African Ports but it will not be long before they will start showing up here as well I suppose. 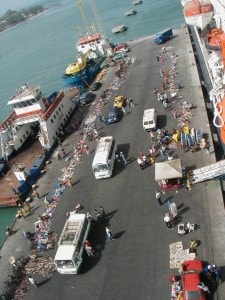 Rows and rows of wood work, linen and other local souvenirs for sale. Interspersed with tour buses. One lady had even set up an catering stand solely for supplying the vendors.

Since the last call of the Prinsendam in 2007, the pier had been extended and thus there was room for both of us. For the rest there was also plenty of room for the tour buses although later in the day they had to fight for space with the ever increasing numbers of vendors who were laying out their wares in front of the ship. The locals do like to dress up in bright colors and thus the dock site looked like a Van Gogh picture on a sunny day. We had the local dance group at the gangway for a welcome show and a large part of their performance seemed to consist of the ladies wriggling their bottoms and heads as fast as possible. Not that I have a problem with looking at that. The only thing that marred the whole performance was that the drums were accompanied by a saxophone player who repeated the same tune about every 30 seconds, Very loudly. I felt sorry for my security team today, who could not get away from the noise. 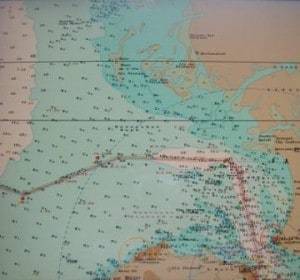 The white color denotes water deeper then 10 meters, the light blue less then 10 meters.  Most of the time the depths were between 7.7 and 8.9; add about 50 centimeters tide and subtract 7.3 meters ships draft and you have the clearance under the keel.

We sailed shortly after 5 pm. letting the Corinthian depart first. I had to swing off the berth and had to do that by pushing the stern into the current and getting the nose into the wind. The river is quite wide at this location but still it is a tricky maneuver. Matters were not helped in the slightest when the pilot boat (a sort of rowing boat with an engine) wanted to come alongside while I had the Prinsendam in full swing. That can be quite dangerous as a little boat like that can get easily stuck under the rubbing stroke, if 38,000 tons of steel is bearing down on you with a great swinging speed. All our shouting did not make any difference. A pilot boat wants to be at the pilot break door and that was where they were going. So I could do nothing else than to slow the swing of the ship down, keep some distance from the boat and meet my ideal course line a little further down the river. The pilot was not happy either as it was HIS boat that these clowns were endangering. We sailed the same way out as we came in and by 20.30 we were back in deep water. From there it was turning North and heading straight for Dakar which will be our next port of call tomorrow. Pilot time has been confirmed for 06.45 and I should be docked before the wind starts picking up after sunrise.