The weather did not change very much and it was a really pleasant day at sea. Partly cloudy but with temperatures in the mid 70’s so perfect cruising weather. The only thing was a slight increase in the movement of the vessel, mainly the pitching. Although the weather charts do not indicate that much of a wave field, I think this swell is coming through all the way from the Southern point of South America, where the weather is truly atrocious at the moment. However it looks that it will slowly get better and thus we could be lucky by the time we leave Valparaiso.

Apart from our lectures at sea, we have on Grand Voyages also Support Staff on board. These are people who are not a regular part of the ships entertainment team but have guest status and come on board as they have a special talent or trade to share with the guests.

Apart from that we have of course the activities in fitness by the Ocean Spa Ladies and those of the Hostess. Together with the Enrichment Lectures that I wrote about yesterday, it creates a very full program that can keep everybody occupied from early in the morning until late at night. Not everybody participates in everything and some guests are quite happy to relax with a book on deck and watch the world go by.

This very full program reminds me of an experience from the very beginning of my career. On board the Statendam IV, arrived a gentleman, whom we thought was a bit jittery to say the least. It turned out that he had been sent by his psychiatrist on a cruise to have a REALLY relaxing time. However, the moment he got hold of the daily program he started to join in. Join in, in all the activities going on and as a result he went quite quickly into “overload”. To such an extent, that we had to remove him from the public eye for the remainder of the voyage. Me as a junior officer was one of those assigned to look after him and I got a really good insite into the mental processes of this gentleman. Our ships doctor contacted the Psychiatrist at home to discuss how to get this person safely home again. It was decided to send his brother to the port to pick him up. Brother duly arrived and it quickly became clear that both of them operated on the same level as far as these “mental processes” were concerned. The port police took them to the airport in the end but I always wondered how the flight staff had coped with the two of them. Later on when cruising became more and more mainstream we did not have these issues anymore as I assume that also psychiatrists went cruising and at first hand experienced that cruising can be very restful but not necessarily so.

Tomorrow we are in Callao and it looks like a very nice day. Partly cloudy skies but temperatures might rise into the 80’s if the clouds disappear. Eventually we will get different weather, although I hope that we will not be exposed to what the Veendam had on their first day near Antarctica. You never know of course though…………….. 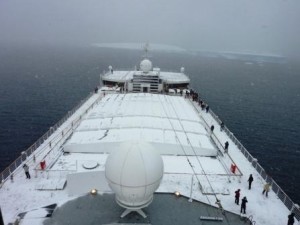 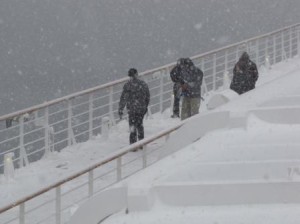 Today no shorts and or flip-flops 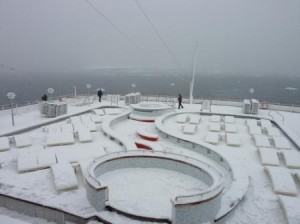 This is called The Retreat on the top part of the ship and somewhere under there, there is a wading pool.