Another new port today and what a beauty. Safely tucked away in a deep bay, and with an entrance guarded by a large cone shaped island; making it almost impossible to see from the open sea. The words Safe harbor comes to mind. And very safe it is. Proven by the large Marina’s scattered throughout the bay. Including right where we docked. Some clever clog had the brilliant idea to create a marina and turn the sea or boundary wall into a cruise dock.  The only disadvantage for the guests is, it is a fair distance from the town. But then things are never perfect. 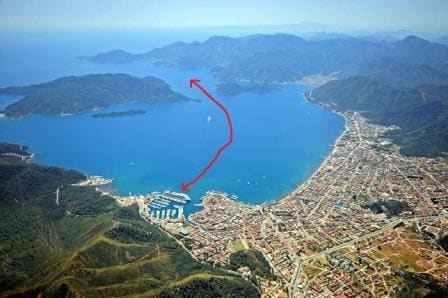 Our way in, and also way out. (Courtesy Mamaris Port)

It is still before the sailing/vacation season starts and thus all (1000’s of them) the sailing boats are still alongside, which is a good thing for us as it means getting in and out of the bay is not fraught with challenges. I have railed in the past in my blogs about six pack navigators doing everything except what they are supposed to do. I do not know if the phrase six pack navigators is acceptable in Turkish Waters but we can also call them Ouzo –Mariners. Same result. Grey hairs for the Captain and the Navigators. We won’t have that problem today. 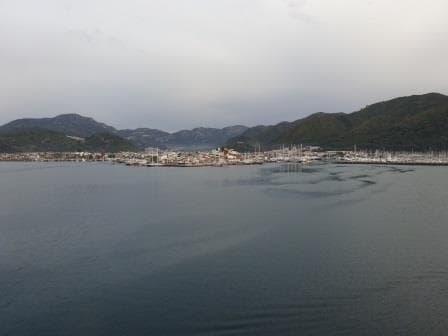 Marmaris from the ship.

What started out as a chilly morning turned into a glorious sunny day with just a nice touch of wind to keep the temperatures very pleasant. It looks like Turkey is making up for the cold weather in the Black Sea. I did not get ashore as I had a large fire drill to organize today and more trainings to give.  My stay on the ship is coming to an end and we try to get all the wisdom dispensed packaged in as much ————- to remember and use—————— moments as possible.  So we had a simulated fire in the Laundry, all crew assembling for roll call and we finally simulated a complete abandonment of the ship.  What pleased me was that all crew were saved even those who had a (simulated) accident and could not get to their mustering stations. They were found by the Sweep Teams, delivered to Medical and then taken to the Tenders, so Medical could look after them also after the ship had sunk.  (Also simulated)

But I was going to explain about a Bright Star Alert. Every company has code words to signal an emergency, and those code words are used to reduce a long announcement to a short and to the point message. Bravo Bravo is probably the best known as several companies use that to stand up their Fire Fighting Teams but there are a lot of others out there as well. The most unusual one I have ever heard was “Johnny Walker call the Gangway” which was an announcement to indicate Officials coming on board to conduct an inspection. (Not our company!!!!)

However Bright Star was created by Holland America to get medical attention and support teams very quickly to a location where there is a medical emergency. As we are a floating village we have the regular village issues and that means on occasion we have people who get a life threatening occurrence such as a heart attack or stroke. For a situation where 2 or 3 minutes can make the difference between life and death a quick P.A call can just top the balance. So we train this evolution as well. But we are also required to test this un-expectedly or un-announced. If you always announce it, as with a drill, then everybody mentally prepares themselves and is already on standby. That does not synch in with real life where things are always just different than what you have trained for.

As we are a little village, everybody knows everything and that makes it difficult to do something really un-expected. Thus Yours Truly got involved as nobody really knows what my schedule is and why they see me nosing around everywhere. So with only the Captain in the know, I pushed the Dead man’s button in the men’ sauna and waited for results. And the results were impressive. Less than 30 seconds and I was found. Less than 3 minutes since the start and the first medical equipment (AED & CPR) was on scene. Less than 6 minutes since the start and the whole medical team and all equipment was on site including stretchers etc. to set up an impromptu hospital.  I do not think that on the shore side they can beat that.

So very happy with the result, everybody could return to lunch, as nasty-me had pushed the button right during everybody’s lunch break of course.

We left beautiful Mamaris right on time and sailed back out of the bay. We will pass the Island of Rhodos and then tomorrow morning we will have a spectacular entrance into Santorini. The weather looks very good again; the only thing to contend with is one other ship in port, which means our guests have to share the cable cars with the competition. 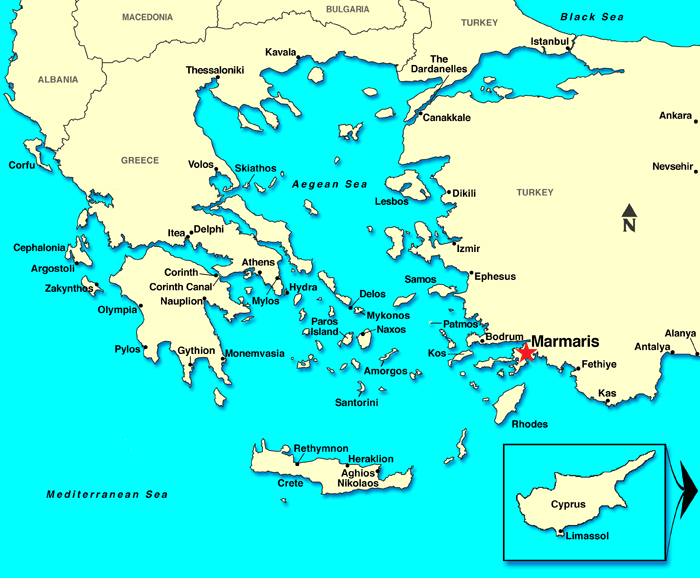 For those who do not know where Mamaris is.