Last night we had an hour back because North America is still on summertime (GMT – 4 hrs.) and the Caribe stays on GMT – 5 hrs. all year around. But by the end of the month they should be in synch again when winter time comes. With the hour time change it was day light a little bit earlier than yesterday and it also helped that we sailed towards the East of cause. Daylight revealed a situation that we had hoped would have gone away already.

Yesterday I blogged about waiting to see if there would be wind enough to keep the ship at the anchorage but I was not expecting that the swell & wind were still completely from the wrong direction. The wind had not turned at all back to the normal North Easterly Trade wind direction. The wind and waves where still coming in from the S.E. and slightly more from the South than from the East and that was bad news. If it was wind only then the ship could stay on the engines and float with the nose in the wind and maintain position without drifting onto the island.

But SE swell is another story. It does not have to be an issue for the ship but it can be an issue for the port. And today it was. The long swell was running straight into the port and while going over the shallow area in front of the port, building up even more and then crashing into the dock walls. The captain sent a tender out to check on the Pilots reports and the crew reported in & concurred with the pilot, saying that things were not looking good. While alongside the tender rose and dropped constantly 3 feet and more and was not steady for a single moment. Imagine trying to step out of an elevator where the threshold is constantly going up and down by three feet. Not safe to do …………….and that we do not do. Hence the only decision that could be made was made, cancelling. Not nice for our guests, not nice for the shopkeepers, but safety comes first. The only good thing about sending the tender ashore was that it picked up lost luggage from Ft. Lauderdale. So we will have some happy campers on board.

For Grand Cayman there is no plan B. If the downtown docks are too dangerous then it stops. And as long as Cuba is not open to us, we cannot dash over for an alternative port. Thus the only option is to stay at sea, sail a bit slower and enjoy a sea day onboard. The Cruise Director came up with an alternative program and I helped out with doing my HAL history lecture in the show lounge, which with careful planning, I managed to finish just before Happy Hour started in the Bars. By the time we sailed away the wind already started to breeze up. It might still have been from the wrong direction but it already followed the Trade wind patterns of increasing in strength during day light hours.

At sun rise it was a light Air, when we lowered the tender it was a gentle breeze, when we picked the tender up it was a moderate Breeze and by the time we sailed it was a Fresh Breeze (16+ knots) and the normal Trade Wind strength. If the direction had just been a little bit different……………………….  we would have made the call.

This wind business might need a little explanation. Although navigation is nowadays a highly technical operation we still keep the old traditions and names alive. Although this might come to an end as well eventually as the Beaufort Scale is less and less learned nowadays. Mr. Beaufort was an English gentlemen who in the 18th. Century invented a scale to classify wind strengths. It was his aim to ensure that when captains were talking to each other, when they boosted about surviving the same horrible storm, that they would at least be able to describe the correct storm force to each other.

So he came up with a scale of 12 steps and a description of each step in wind force, and sea state. 0 for no wind and flat calm seas and 12 for: such winds that no canvas can withstand. That corresponds with hurricane force winds. Nowadays we can measure winds way over wind force 12 (75 knots) so a wind force 16 would be possible but we do not do that. It stays with force 12………… as it is already bad enough. Apart from a wind meter you can see at the sea state what sort of wind is blowing. 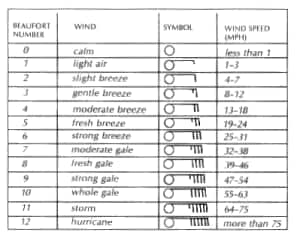 I still prefer to hear” it is blowing wind force 3” than to hear it is blowing 8 knots. 8 knots is a more precise measure but the force number indicates to me more what the wind is doing to the sea than anything else. Thus the remainder of today we are at sea and tomorrow we will be as well. Then we visit Cartagena for just over a half day. Staying longer is a problem as it endangers the timely arrival at the Panama Canal. And that is a no – no, because if we miss our slot, we might have to wait a long time for a next opening.