Approaching Manta was an interesting affair, as we could not see the port at all. Looking towards the horizon we saw a brilliantly lit up sky line full of yellow city lights interspersed with the clear white deck lights of the Tuna fishers at anchor. As the port only consists of a few very low piers, the radars did not reflect a very clear picture making it hard to pin point the harbour entrance. Thus we relied on the GPS for our initial approach and when coming closer tried to recognize the lighthouses on the coast to take bearings and to find the exact spot of the harbour entrance. The light house on the corner of the port was supposed to be visible from a distance of 6 miles but it was not until we were less than four miles away that the red light came through and we could steer for the breakwater. Suddenly the pilot called; and this was a new one for me in South America, that he wanted to come onboard earlier than was arranged. Well no objections there, so I kept the speed up. However then he could not keep his own time schedule and by the time he stepped onboard; I was already turning the Prinsendam into the harbor.

However he was still on time on the bridge to observe the ship lining up alongside and to advise that there was much more water along the pier than the chart indicated. That was good news as it made it possible for me, to bring the stern inside the pier and arrange a better spread of the stern lines over the dock. By the time that we were docked we had also figured out why we had such a hard time finding the correct entrance location. Simply the chart positions were not the same as our GPS positions. 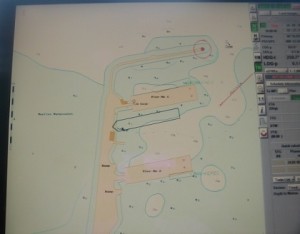 According to the underlaying chart, we are with the nose in the pier and off the dock.

As you can see from this picture of the electronic chart, we are half way on the other dock while I have over 1000 witnesses onboard who can vouch for the fact that we were indeed docked alongside. These sorts of things are not unusual. Most charts were first made in the 19th century without the luxury of satellites and all features drawn in were in relation to one reference point. The golden rule is when you recognize such a situation is that you go by the chart. As wrecks, reefs and docks are drawn in relation to each other. So if you can fix a position by taking a bearing from a point marked on the chart (called a conspicuous point in nautical language) and you set your course in relation to that, you will clear any obstruction that might be there. Hence our search for the lighthouse on arrival. 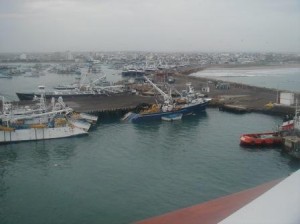 Manta is home to a large Tuna fleet and numerous vessels (I stopped counting at 75) were docked and at anchor. These are large and fast fishing boats, nothing compared to what we are used to along the shores of the USA or Europe. Tuna are normally swimming in shoals that move very fast, thus a fast boat is of the essence. Some of the large ones carry Helicopters that are sent out to spot tuna shoals and when the boat comes near them, a very fast and strong boat is lowered which pulls a heavy net around the shoal. 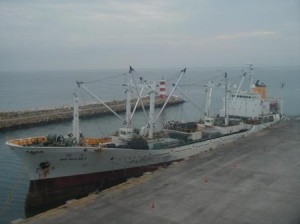 The large rubber fenders on the deck are hung over the side of the ship when the fishing boats come alongside to hand over their catch. The light house in the background is the one with the small light that made our morning approach more difficult.

When the catch is in, it is necessary to freeze the fish quickly to keep its freshness. For fast transport a freezer mother ship is normally sailing with the fleet and the fishing boats go alongside these freezers to transfer their catch. When the freezers are full, that ship will leave for port, while the tuna fleet continues fishing.

We left half an hour late in the end, as our full day tour to Quito had a plane delay on the way back. In the morning when we arrived, the ship rolled quite a bit on the ocean swell in front of the port. Also during the day the ship was riding along the pier a little bit, although not as much as it could have been. It was a “quiet” day for Manta. However I was worried about rolling at departure as I had to swing the ship off the dock before making speed. So I make an announcement to all the guests to be very careful while the ship was departing. It worked out well in the end as my little take off” maneuver worked. I learned it a long time ago from one of the old HAL captains, long since retired and passed away. What he did was, get the pilot off inside the port. Line the ship up first, extend the stabilizers and then give full ahead and race out of the port, giving the swell as little chance to get hold of the ship before it makes sufficient speed for the stabilizers to become effective. Almost the same as air planes do when taking off. Lining up with the run way and gathering speed as fast as they can for lift off.

So I did the same. Maybe a bit of anti climax for the guests who did feel very little in the end but better safe than sorry.

Tomorrow we are at sea again with the same weather. Mainly overcast with little wind. We will spend two days at sea before we arrive in Callao. South of Valparaiso there is some very nasty weather blowing but it will be another week before we get even close to that area.

Our image creators onboard went ashore during the Panama Canal transit and their photographic creations are now for sale onboard. With permission of the manager I have added two very nice ones to today’s blog. Both images taken by Vuk Toskovic, Prinsendam, Image Creator Manager 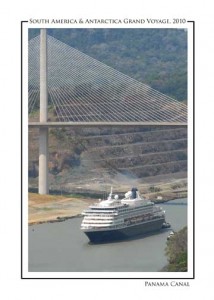 The Prinsendam sailing under the Centenial Bridge in the Panama Canal. 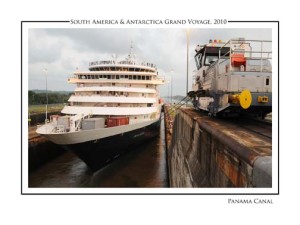 The Prinsendam in one of the locks. The containers on the bow house the tools for the contractors working on the new aft section. These will be lifted off the ship in Valparaiso when the work is complete.