If you look at the map of South America you will see that Panama is sticking out on the left hand top side like a branch from a large tree trunk. As a result it is one straight course from the Panama Canal sea – buoy down to Manta In Ecuador. No reason to change course; the bulge of the Western side of South America comes closer and closer to the course line and the only thing you have to do is brake on time and you are at the pilot station of Manta. It is very quiet in the Eastern Pacific at the moment and as a result we had very little wind, very low swells and mainly overcast skies. The latter kept the overall temperature down and that was appreciated as today we had the King Neptune festivities onboard.

This is always a nice tradition and is kept alive with great gusto by those working onboard the cruise ships. The guests love it and the crew enjoys doing it, although not always those who are on the receiving end. Due to the overcast weather we had a prefect day for the show. There were some rain clouds in the area but I told the navigator on duty to sail in between them, which she did very nicely, so it stayed dry on deck. The Prinsendam has two pools and although the aft one (on our recently opened deck 9) is larger, we normally use the centre – Lido Pool – as there is more room for the guests; as they can also stand on the deck above, all the way around, and look down. I prefer this smaller pool as well, the pollywogs cannot get out and as a result they cannot throw me in, what has grown into a standard activity at the end of the proceedings. We will be crossing the actual equator around 2 am tomorrow morning but you cannot expect the guests and crew to stay awake for the exact time, so we did it today at 2 pm. 12 hours earlier.

Here follow a few pictures of the event, all courtesy of 4th. Officer Aline Sauze. 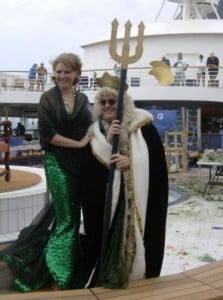 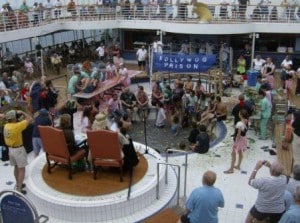 The induction process has started, Pollywogs waiting in the Prison and the “Doctors” giving everybody a good wash. All under benevolent eye of King Neptune. 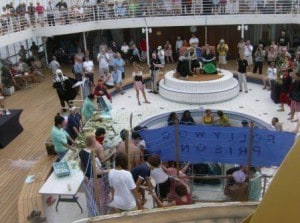 The Prosecutor. Properly dressed in court with a white wig and black robes. Under which the Dark Vader costume out of Star Wars……. I suppose it makes sense somehow……… 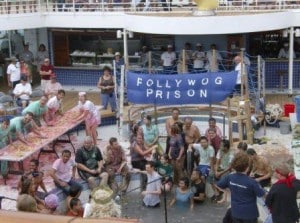 The Doctors are clearly enjoying their job of giving everybody a good body scrub, that cannot be said for those on the receiving end 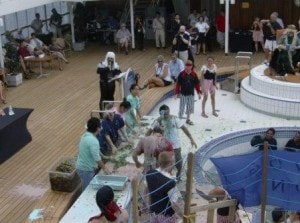 A special treatment was in store for Norbert the Culinary Operations manager. He was doused in chocalate milk which has the nasty characteristic of drying extremely fast and being extremely itchy. The judges were also very happy to give him the thumbs up and to let him suffer on the edge of the pool in the warmth. 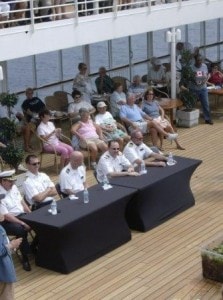 The most unpopular group of people onboard. At least in the eyes of the pollywogs. They decided who went in the water and remained cool and who had to suffer sitting on the edge and slowly but steadily feel the itching start.

In the mean time the good ship Prinsendam sailed slowly south towards Manta where we will arrive tomorrow morning at the pilot station. The weather is supposed to remain the same as today and that is good news as with increasing winds there tends to be increasing swells and that makes for an un-comfortable approach into the dock, with a rolling ship and a severely riding ship while alongside. We have to see how it will work out but at the moment things are looking good. While we are sailing along we are closely watched by the Equadorian authorities. They have established a reporting system along their coast called Sistrame and apart from announcing our intention to go to Equador we also have to send four hourly updates of our progress. Peru the next country we will visit has something similar. In the old days you had to send telexes or faxes or try to raise a shore station by VHF but now we just send an email and it is all done. Manta is home to a large Tuna fishing fleet but we have not seen a single one of those boats at sea yet. They are either all out fishing in the deep ocean or we will find them all docked tomorrow in the port.

Apart from being the nasty guy who decided what happens to a pollywog, I kept myself busy today with going through all the paperwork for Antarctica. To keep that area pristine an international organization called IAATO is keeping tabs on all the cruise ships that are going there. My head office has produced four thick binders of information, regulations and compliance papers to cover all that is required under the rules which give the right to sail there. It is of course a must to leave the area as pristine as we found it on arrival and that means a lot of focus on local regulations.

Holland America has a very high environmental standard that it adheres to onboard the ships and that means we do not have to make any changes to our shipside operations to comply with the rules. The issue is more, the accounting, reporting and proving the compliance. I will explain more about that when we go south off 60o as that is the magic border line.

Tomorrow we are in Manta and if the weather forecast is correct it will be a very good day. Little wind, mainly overcast and temperatures in the high 70’s.