The Tehuantepec wind was indeed blowing but we were prepared. We had all the ballast tanks on the starboard side ready and when we entered the windy area, we could pump sufficient water into those tanks to keep the ship completely upright. It is part of the human psyche that people only realize that there is something going on, if their normal living environment changes. It is the same on the ship. It can be wind force 10 blowing outside (severe storm) but if the ship does not list or rock, guests on board will not realize that there is a grave storm out there.  However as soon as the ship moves, even if there is no wind at all but only swell from somewhere else, then people start talking about bad weather. So number one item on our checklist is, keep the ship upright. Number two; keep everybody inside for this windy period to avoid accidents.  Thus in the early morning, when we went through the area, all was prepared for. The wind breezed up to a max. of 45 knots but as there is no swell to go with it; nobody was bothered by it in the slightest. The most amazing thing is always when you come to the edge of this funnel wind. Then within 30 minutes the wind goes down from 40 knots to complete zero and then returns to what is normal for the area. We have this wind normally each time we come through the area during this time of the year and it never fails to amaze me that this wind picks up and dies down as if somebody up there turns over a switch. 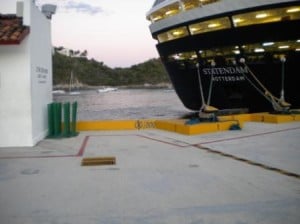 Docked as far in is as possible. The ship can only go as far as the last bollard before the water gets too shallow. The round circles on the mooring ropes are rat-catches and are meant to keep rats off the ship (or on the ship depending if you are a shipside or a shore side authority) Although the cruise docks & ships are rat free, the regulation is still there, so we comply.

The good news about a tehuantepeccer blowing is that it means that it will be wind still in Huatalco. That is important for me, as  there is not much space between the dock and the boys on either side to drift.  No wind, no drift and that is perfect. Especially as I prefer to back in and dock nose out. The weather can be very unstable here and I like to have the option to get out quickly if needed. I can always take shelter around the corner and send the tenders in to collect the guests that I had to leave behind because of that emergency.  Today there was little chance of that, but why change a good routine if you have one. Thus with the pilot on board we swung around and went astern for about half a mile to the dock where we stayed until 22.30 hrs.  This season we are not calling at Acapulco, due to the security situation there and to alleviate that we are staying in the evening here for a deck barbecue and mariachi music.

We had a seven piece band on the ship with a barbecue cook out on the lido deck which was attended by nearly 650 of our guests. Most of the first sitting guests preferred the dining room but the s-class ships are blessed with a band stand over the dining room so we had the mariachi’s there as well.

By 11 pm It was time to pull out and we did so in wind still weather and with the lights of all the houses on the surrounding hills twinkling in the dark. Very atmospheric and a perfect sail away. What was less perfect was that all the fishing boats were also out and their little lights were twinkling right in front of my bow. But this is where the local pilot comes in handy, and with a lot of Mexican excitement pilot boat and navy escort vessel were dispatched to move those boats to safer waters. Patrol vessel crews like this sort of stuff as it gives them an excuse to play with their toys and I know that the boats will quickly oblige as nobody likes to look down an M16 barrel for too long.  Same as in USA ports; we have in Mexico a navy/coast guard vessel escorting us in and out the various ports as a sort of security deterrent. It is just an additional bonus for us that we can also use them to usher impeding traffic out of the way.

Our next port of call will be Cabo San Lucas and it will take us two days to get there for a scheduled arrival at 07.00 hrs. I will be there at sunrise to get the tender service started timely as we only have a short stop there, and we have to share the anchorage area with two other –mega- cruise ships.

The weather looks good for the coming two days, little wind and low swells so we are cruising along in a very pleasant way.