It is not often that cruise ships do overnights as regular cruises are based on the fine balance between port time, sea time and an optimum cruise schedule. However with our cruise ending in Greenwich there had to be overnights as Greenwich is tide related. You can only get in on the one day, do the change over on the next day and sail out on the third day, unless the tides run in synch with normal arrival and departure times. That is not always the case of course. Although we now docked at Tilbury our cruise schedule remained the same, only I had now the option to offer even more shore time than when docked in Greenwich. Not so far to go up river and not so far to go down river and no tidal restrictions. Thus more time on the first day and more time on the last day. It turned out good for the guests and good for the crew. The ship was barely alongside and the first guests already streamed into the waiting shuttle buses that took them to the train station and 30 minutes later they were in London. A great time was had by all.

Not everybody decided to go to London. At the bow of the ship a little ferry docked and took people over to the other side where the City of Gravesend is located. Outside England its main claim to fame is that it has the grave of Pocohontas. However it has much more as it is a very historic town and the town centre is just off the ferry landing. Good reports came back from there as well. Some guests found the local pub in Tilbury, which is (please advise if I remember it incorrectly) The End of the World. It is still an authentic English Pub and not the plastic version you see all over the world in shopping centre’s and large hotels. The only thing you have to learn is to enjoy warm English ale. It does not have a rim of foam, it does not fizz and it is drunk the best in Pint size glasses. But there is more in the world than Budweiser and the first guests that ventured that way, when back on the ship convinced other guests to try it as well and I believe we did stimulate the local economy during our stay. We have about 150 in Transit guests onboard who today had a full day enjoying London, Tilbury or the surrounding country side. The rest of our guests went home and new guests started to arrive by late morning.

In the meantime I spent my day clearing up my correspondence and emails and had a good look at the weather forecast. Ex Tropical Storm Bill is on the way over and will eventually pass Ireland and England. Although it is now only a depression it still carries a lot of wind and rain so it is something to keep a close eye on, especially as we have several tender ports during this cruise. Wind causes swell on most anchorages and that endangers a safe tender operation. Hence the fact that Bill will have my undivided attention for the coming days. 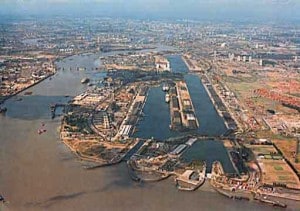 The London docklands being redeveloped. The old lock system to block out the tide is clearly visible in the front. Photo courtesy: somewhere from the Internet.

Although most people do not associate London with being a big cargo port, it is. All day long cargos ships, tankers, container ships and other variations passed us by on the river. Coming and going to various docks along the river, or through locks into docks that by means of the locks are not tidal. That has the advantage that loading and unloading is not hampered by the tides which might cause the ship to soar high above the pier, or far below. I could see that clearly by the Ro-Ro carrier the Topeka that was docked behind us. The ship was off loading mini cars and had the stern ramp flat on the dock so the cars could drive straight off to the parking area. That ramp stayed flat on the dock and linked to our dock which rose with the tide. Had the dock been fixed then there would have been a time that the ships ramp would have been under an angle of about 30 to 40 degrees, making it very difficult to get the cars off. Today was spring tide as well, adding another 3 to 4 feet to the normally already considerable height difference between low and high water. Therefore the London docks utilise at various places a lock system so that all cargo work can progress unhampered by the tide. These lock systems are not as extensive as they used to be. The old London docks near London itself have all gone and have been replaced by Office- and apartment buildings. Canary Wharf in the Docklands is a well known example.

Today the weather was great, sunny and warm and tomorrow will be the same.