We are now in the middle of the process of what we call “Island hopping”; everyday a new Island and everyday a new experience. Although the Caribbean islands have a large number of similarities there are also striking differences. Most of them are caused by the colonialisation in the old days that brought traditions and routines which are still observed today. Barbados closes it shops on Saturday afternoon because of the weekly cricket game; people retained the language from the last or most influential occupier or developed their own uniqueness among the other islands of the Caribbean rim.

St. Lucia is one of those islands as well. Although Tourism & Cruise Industry is a very important of the economy it seems that it has never taken over or dominated the island. Even at the cruise ship terminals, where most of the souvenir shops are concentrated it is not as over powering as in St. Thomas or in St. Maarten.  A slower pace still persists and that brings a certain charm to St. Lucia which other islands sometimes miss. It might help that only ships which make 10 day or longer cruises can call here, as it is just too far south to be part of a 7 day itinerary from Miami or Ft. Lauderdale and that cuts out most of the mega liners.

I have been calling here with Holland America since 1986, when we had to anchor outside due to the shallow harbor.  Cruise Tourism was still in its infancy here and we tendered into downtown and the local market. It was quite a long tender ride. Passengers were unloaded straight into the fish shop of a Mrs. Black, whose skin lived up to her name but she had off-set that with the most vibrant  colored dresses and head scarfs I have ever seen. She was a very large and friendly lady and equipped with a voice like a fog horn, so nobody could miss her when she sold her fresh fish. She was a great ambassador for St. Lucia all by itself. When landing with the tender it was the first impression you got about Castries and it was a good one. 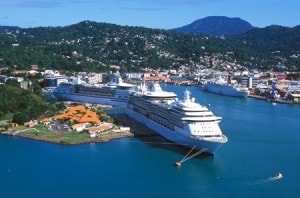 Castries Bay full with cruise ships. (Stock Photo from some years ago)

Then the port developed two cruise terminals on the other side of the Bay. Seraphine I and Seraphine II. The harbor was dredged deeper and cruise ships could come in. The downtown dock was then mostly used by cargo ships.  Nowadays, on busy days, and or when smaller ships are in, the downtown berth is now also used again by cruise ships.

So today we saw the Braemar docking there who had followed us from Antigua.  St. Lucia is a very fertile island which can be seen by the lush green scenery all around the port and up into the mountains. 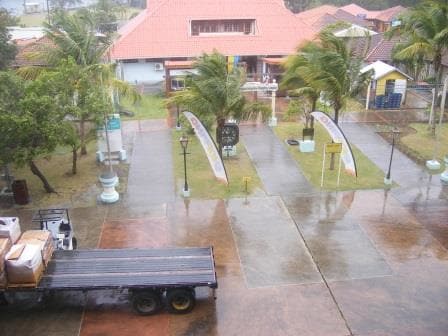 Downpoor at the Shopping Centre. Still life is slowly paced. Even the advertising clock for the local Jewellers was 5 minutes slow.

Occasionally you are reminded about how it is possible that it remains so lush and green when there is a sudden downpour. We were able to witness one this morning when just before noon time the heavens opened for a short moment and the torrential rain shower came down in the bay. Luckily they normally do not last very long and this one did not last very long either. 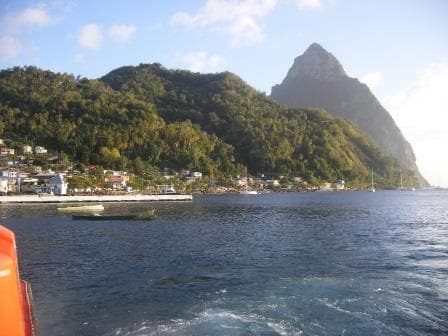 Gros Piton dominating the bay of Sourfriere. As seen from the Tender Pier.

Also as long as I have come here, we make this a two port call. We spend the morning and early afternoon in Castries and then sail along the coast towards Soufriere, near the south end of the island to retrieve our overland tour and at the same time look at the magnificent Pitons. Soufriere Bay is sheltered from all sides except the South West.  As there is seldom bad weather coming from the south west, it is a very popular place for yachts to spend a few days before heading out to sea again. The east side of the bay is normally full with them. The most dominant feature are the two boulders rising up to well over 2000 ft. The largest one is the Gros Piton (777 meters or 2548 ft.) and the smaller one is Petit Piton (743 meters or 2266 ft.)

They are not really boulders of course but cone shaped mountains. They are cores of two lava domed volcano pipes and most likely a left over from a larger Volcano. The sides of these Volcano Pipes eroded and collapsed away and the cores, made of harder material remained.  As the Volcanos have been dormant for the last 20,000 years, the Pitons and surrounding area is completely covered in dense Tropical Jungle and home to a large variation in wildlife, including Iguanas. Under that majestic view, we sent the tenders ashore to retrieve 197 guests who had explored St. Lucia by means of an overland trip and had thus seen most of the island.  Our tenders arrived at 5 pm. and the guests showed up at 5.05 pm.  So it was all working like clockwork. 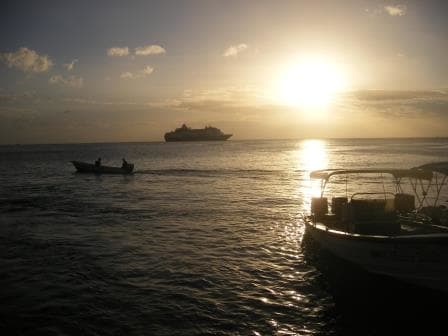 The sun setting over the ms Ryndam.

The Ryndam remained floating in the bay as it is much too deep to anchor here.  I took the chance to get my Tender Operator school class involved and had them do the work on the tenders and observe the operation. They will have their exam in Grand Cayman so they had better be on the ball.

By 6 pm. we were on our way again. The Ryndam headed on a south westerly course and will now spend the next 38 hours or so crossing the south western part of the Caribbean, arriving the day after tomorrow at Willemstad  Curacao.

Forecast weather, hot and balmy due to the following wind with chance of showers in the early morning.