Sometimes the authorities do not make the life of a captain easy. Last cruise we docked inside at the Matthey yard and that is nice for the guests as downtown is just around the corner. But for this cruise that was not possible, for unspecified reasons, and we had to go to the new Mega Pier nbr 2. Then last night the news came in that we had to go to Mega Pier 1.  Why, nobody knows as we are the only ship in port today.  We think it has either to do with the shop keepers or with very large ships going into the port, into the large harbor behind the entrance. But the officers on watch did not see anything major passing the bow. Also the agent was bemused and so we will most likely never know what deep thinking lied behind our final docking location. Luckily Mega Pier is not so much further out in distance than the walk around the port when you are docking inside and have to go over the bridge. 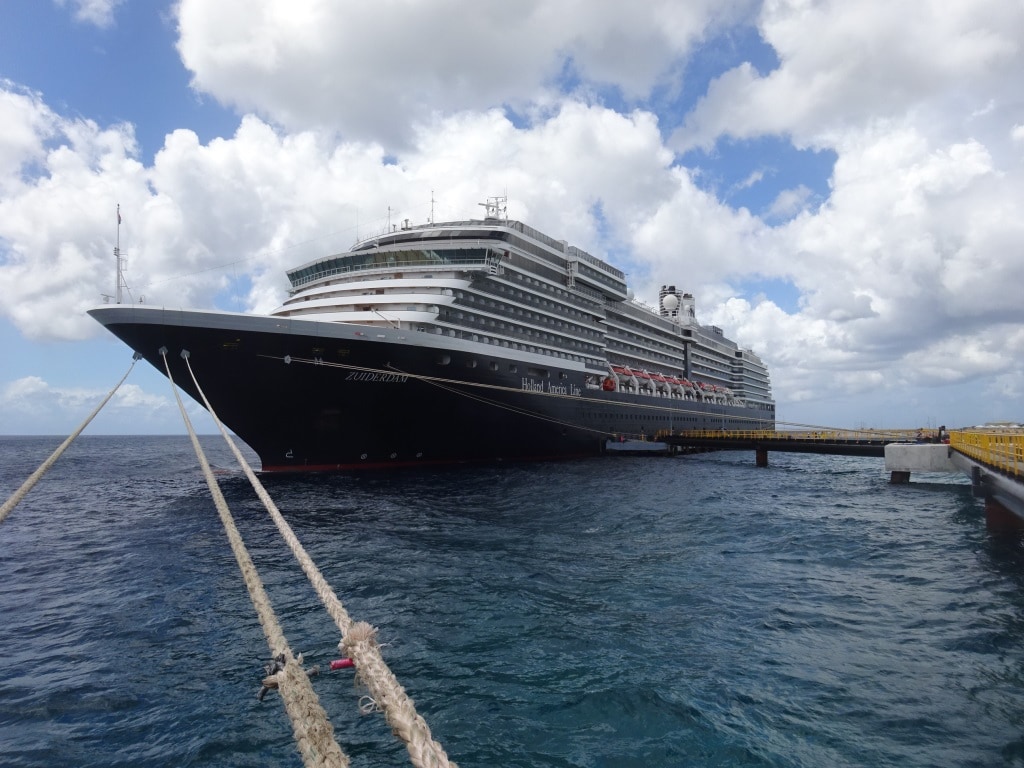 I got the chance to take this photo of the Zuiderdam to day as I photographed the dock for the company’s port database.

Thus in accordance with the port authority orders we docked just after 07.00 at the Mega Pier Nbr 1. and hooked two gangways up again to get the eager shoppers off. A few days ago I showed a photo of our happy quilters on board. Are we amazed that they were not quilting today??? Who can resist the bargains of Willemstad where the prizes are the best of all the ports on this voyage?

I was immerged today in drills and made a simulated attempt to put the Engine Room on fire. While the teams drill very much in standard locations so the primary skills remained honed, I take the chance normally to offer the ship something more out of the box.  An unusual location with a few un-foreseen pitfalls; which then require creative thinking from the teams under the leadership of the On-Scene commander. Today was no different and the challenge that the teams came across this time was that the hoses were too short. We have drawings and protocols for attacking each section of the ship with detailed listings of what you might come across (locked doors for example — do not forget the master key) and what would work best. But if you then suddenly turn things around and go against the established protocol then everything works the other way around………… or not. 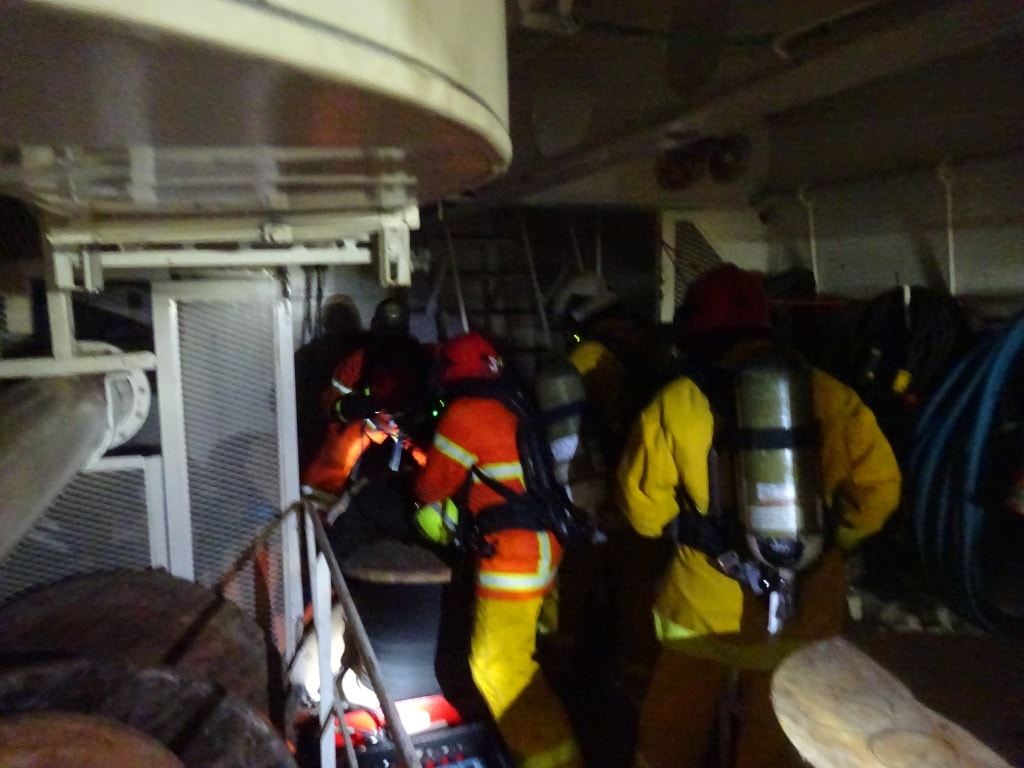 This is the Electricians cable store in the engineroom on D deck starboard forward. Not much space.

Thus the attack plan has to be amended and the teams in this case had to add extra hoses as the normal route was not available and the team had to come from a longer distance. Then there is a 1,2,3 routine required. 1. We move as far as we can. Hose is too short.  2. Take a hose from another hose station nearby and move ahead of the first hose. 3. Now the team with the first hose is protected by the 2nd hose and can depressurize their hose, add a section (about 35 feet normally), pressurize again and then bypass hose 2 again to continue the attack.

What is so difficult about this, is that it has to be done by teams in full battle gear with heavy gloves in tight spaces or narrow corridors. Everybody is on air with Scuba on and that reduces communicating considerably. The team leaders can talk via walkie talkie to each other and to the Commanders but not to all their team members and that communication is done with hand signals. So you are in a tight space, you wear heavy gear, you communicate with hand signals and you have to pull and relocate heavy hoses. I am therefore not always popular with the officers and crew but we prepare for real life situations.

Now why do not all the fire team members have Walkie Talkies so they can talk? It is done to keep the chatter and confusion down, if everybody starts talking. So all team-members channel their communication through their team leader.

Tomorrow we have a sea day and we will be on this notorious course when the ship does not roll, it does not pitch, it does this cork screw thing in between. How much we will get is a good question. For most of today the wind was very light but in the late afternoon it started to breeze up again. That will push up the waves again and hit us exactly under the wrong angle. 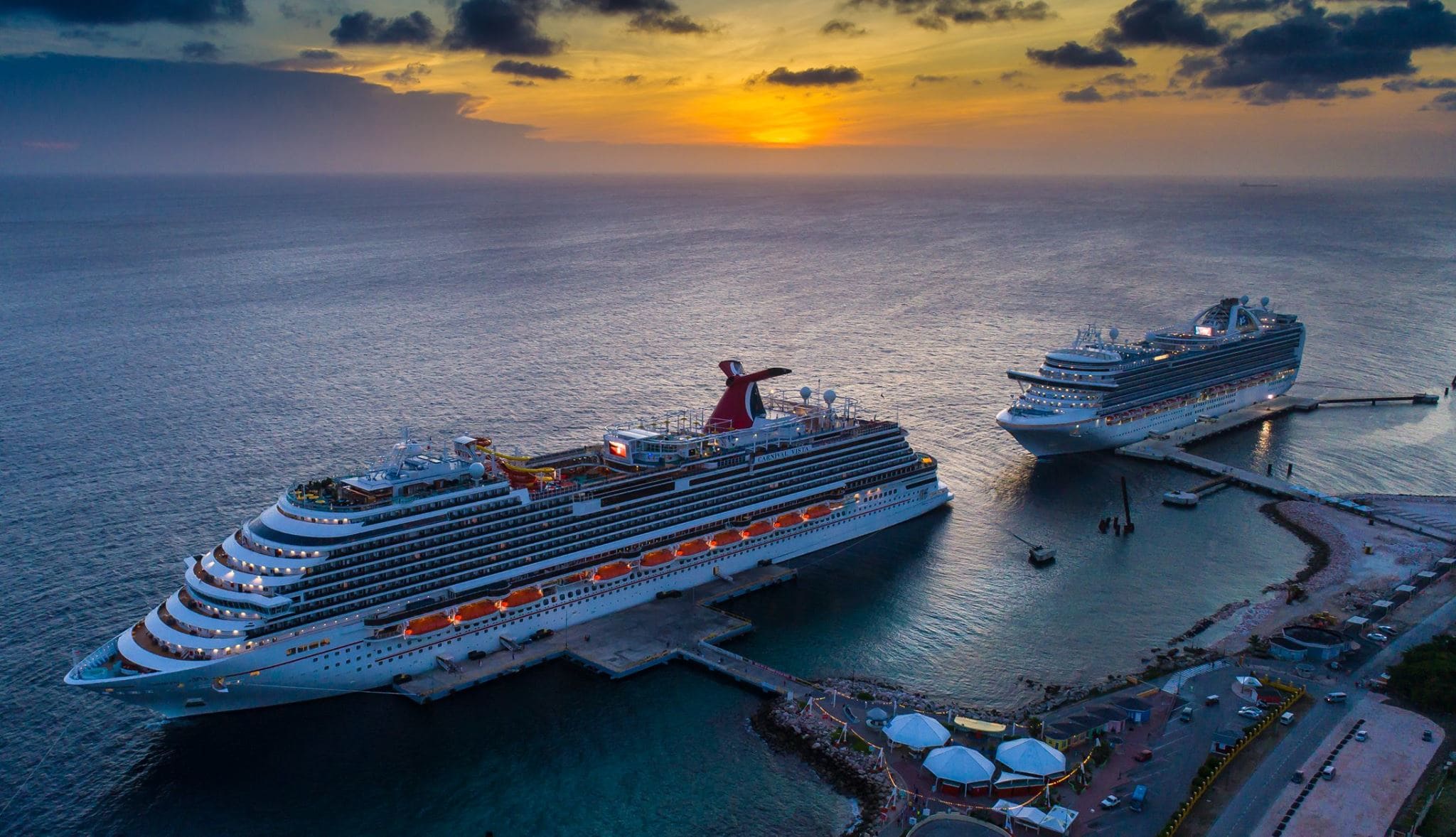 Who says that modern cruise ships can not be scenic. This is Megapier 1 and 2 during sunset. As we are now one happy family I can put the Carnival Vista and Crown Princess on my blog without much hesitation. I do not know who took the photo but it came courtesy of Capt. Ryan Whitaker (ms Maasdam)