It was not a good morning; a strong frontal system was laying over the Middle Caribbean Sea bringing very strong winds gusting up to 50 knots, and sometimes even a little bit more, with rain squalls at times. The sea was very choppy and the ship quite “lively”. Thank God for stabilizers. The Front desk / Guest Services brought out the green apples and the dry crackers and the green apples were quite popular. I just don’t know if they were taken by those who felt a little woozy or by those who liked green apples. Thus we had bumpy ride all the way down to Aruba.  Then when the captain made the turn to line up for the pilot station, a gust of 55 knots came over with rain and the ship progressed a little bit slower to the pilot station so it could all blow over. And then…………………..

…………………..The most beautiful weather in the world. The way the Caribbean should be. The winds slowly died away to regular Trade Wind force and the sun started to shine as if the rain never existed. Good for all of us as we were now in compliance again with the Holland America Cruise Brochures, where the sun always shines. 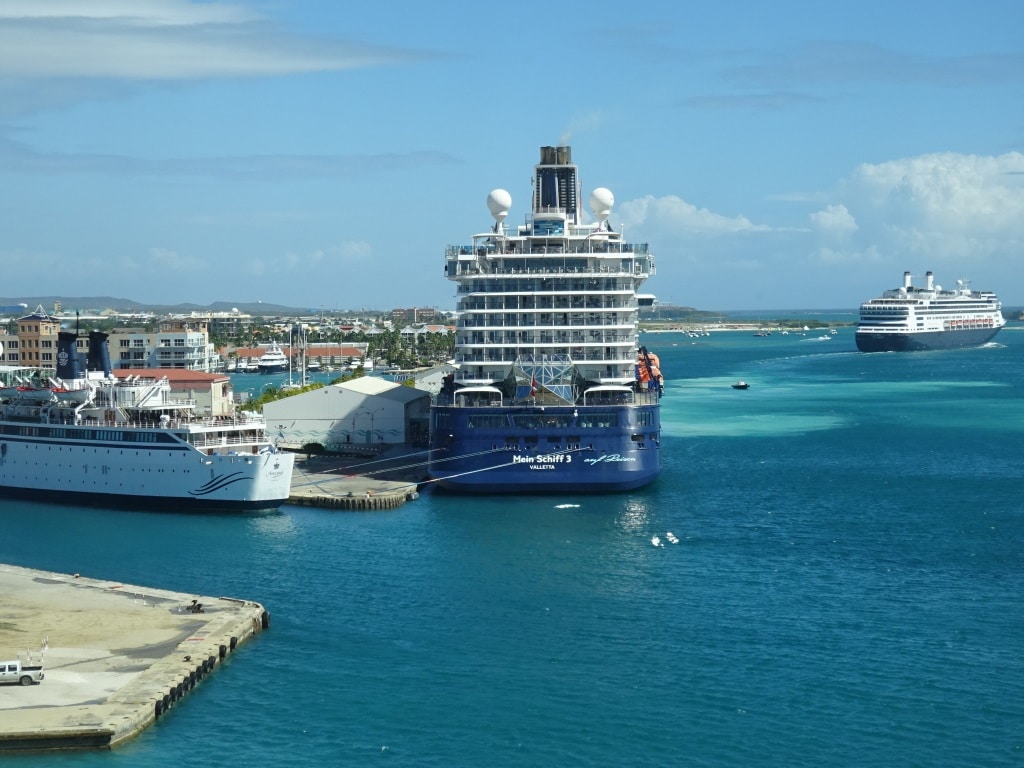 The ms Rotterdam leaving at 15.00 hrs. We can see here 3 generations of cruise ships. The Boheme (now Freewinds) from 1968, the ms Rotterdam (from 1997) and the Mein Schiff 3 (from 2014) Design and size has developed considerably since that time.

It was a busy day to day in the port and thus the Zuiderdam, as last arriving ship, was assigned to the I dock which is the old container terminal and which will be developed into a new cruise terminal. A modern container terminal has been built closer to the airport turning the old port into a cruise port only. The Rotterdam was at dock A, followed by Mein Schiff 3 behind her at location B and C. The Freewinds was at her regular location of dock F and we were then at dock I. There would have been room for two smaller ships but even without them the port was full enough with approx. 6600 guests going ashore, not counting crew.  Our scheduled arrival time was 14.00 hrs. today and we had two gangways out just after 2 pm. Because Lido lunch starts at 11.30 hrs. and the dining room at 12.00 hrs. it meant that the whole ship had lunch by 2 pm. and everybody was thus ready to take off like a rocket.

With two gangways out an almost never ending stream of guests poured out of two gates in the hull. Within 20 minutes at least 1400 guests were gone. It always amazes me how fast this goes, and the more days we have spent at sea before a port, the faster disembarkation seems to go. If we did not have immigration inspection in Fort Lauderdale I would not be amazed at all if we could get the ship empty in 20 minutes.  ……………… it would create a bit of chaos I suppose at the suitcase collection area and therefore it is better that it takes place in groups. Two gangways went out to speed up the process and also to create a separate flow between those on tour and those going off by themselves. Otherwise it is quite hard to separate those on tour from the others and get them to the right buses.  Guests like any other human tend to follow the first few people going somewhere and in no time you have everybody going the wrong way. 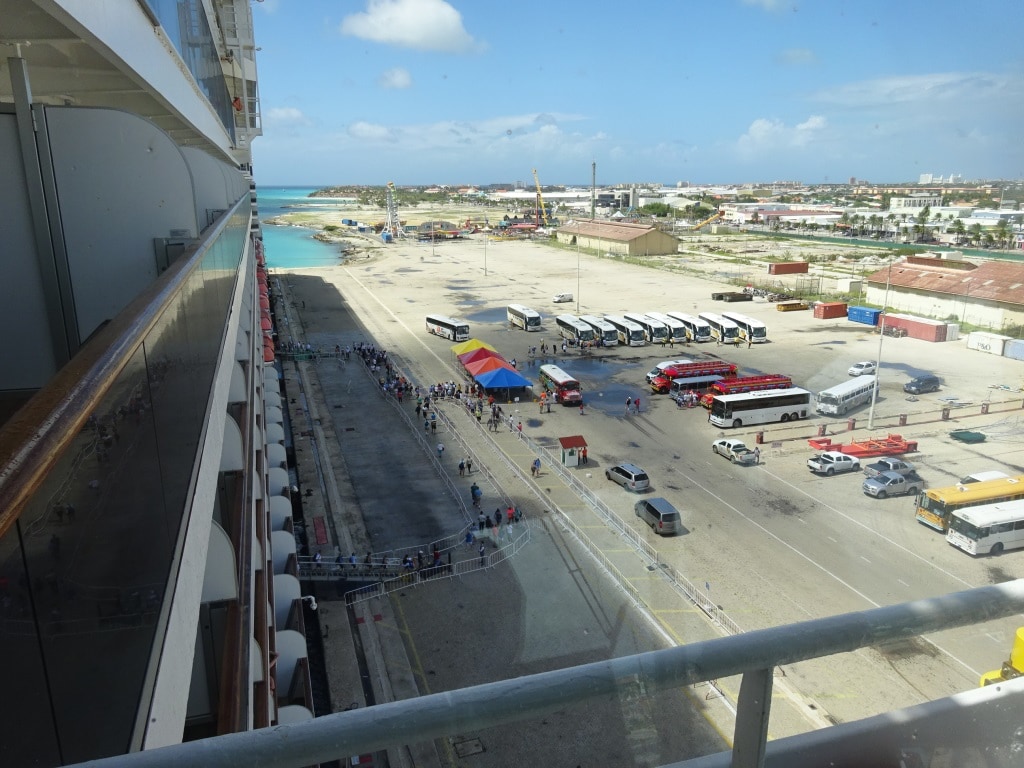 The four tents are currently the newest cruise terminal in Oranjestad. In the near future, there will be a terminal building and the dock can then handle two small cruise ships or one big one.

This group mentality is something that happens less in home surroundings than in an alien surrounding. A long time ago, when I was 2nd officer, my colleagues are I tried this a few times. We just formed a queue somewhere and within 5 minutes we had guests standing behind us and often it took quite some time before the question came…………. Why are we in line?  Answer: we are waiting for the Bus. And then after some more silence the collective realization came that there was something amiss here.  Once it resulted in complaints and the chief officer (the function is now called staff captain) went through his whole repertoire of nasty, dirty and harassing things he could compare us with and threaten us with. So we did not do it again but we felt quite good that we had given the chief officer the chance to release his tenses a bit and got rid of some of this stress. (We did not take that chief officer very seriously when he started venting as he did that almost continuously)

Tonight we will sail at 11 pm. and then go east to visit Willemstad, Curacao. We will not dock inside this time as we have been assigned to the new Mega Pier 2 in operation since November 2017 and I have not been there yet. Weather: nice according to the weather gurus so we will see if they are right.