We had a rather bumpy night while we sailed for the Panama Canal entrance. It puzzled me a bit as this wave field was not to be found in any weather forecasts that I had pulled off the internet. However as it was more waves than wind, it turned out that it was the remnants of the wave field generated by the bad weather we had a few days ago and whose waves now finally made it to the Middle American Eastern shores. As we were heading straight into them it caused the Prinsendam to pitch a little bit through the night. I could not slow the ship down for a more comfortable ride as I had to keep the speed at 17 knots in order to make my deadline of 5 am. at the Cristobal breakwater. Arriving too late would severely impede a timely transit of the canal. I was right on time and then started an unusual but also the best transit of my career.

Unusual as most of the Panama Canal routines that I had prepped the crew for did not occur. We were all convinced that we would be floating off Cristobal for at least an hour while this whole Panama clearance routine was taking place. Normally, Agent, Immigration Authorities, Fumigation Officer, Canal Technician, Canal Administration; they all come and go by separate boats but this time it was different. One agent boat (with our canal brochures) and one authority boat and that was it. The pilot ran to the bridge, declared that we were too late (??); ordered half ahead and off we went. It turned out that the locks were ready for us and as the lockmaster is a powerful man, if he keeps the lock gates closed the whole canal comes to a grinding halt, so you do not want to let him wait. The ship was cleared while we approached the Gatun Locks and everybody was off before we entered the first of the three locks. The Gatun locks come in three steps, raising the ship about 80+ feet above sea level. By 07.40 we were out and then had to anchor until 9 am. We had to wait to take our spot in the line up as nbr 10Z (Z= is for Zulu or Southbound) in the convoy. Ahead of us was a tanker, the Mary Ann Hudson and behind us the Mark Nimes, a container ship. 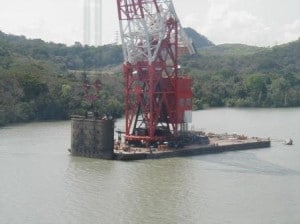 A sight you do not see every day is how one of the dock gates is being repaired. Here one hangs in one of the Panama Canal cranes and will upon completion of the maintenance be reinstalled.

From then on the whole operation went like clockwork and everything that happened took place according to the schedule that we had received the day before from the agent. Never before in my career (and I have been going through the Canal since 1979) did it go on the minute. Normally there is always a ship that delays the convoy, or a barge or dredger in the way but nothing this time. We entered and left the Pedro Miguel locks (2nd set of locks) and the Miraflores locks (last ones) exactly on the assigned times. After that we even ran ahead of schedule by about 30 minutes. So by 17.15 hrs,. I was at anchor at Flamenco Island for our overnight stay and next day call at Fuerte Amador. 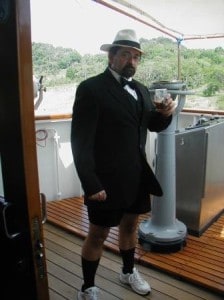 A sight you only will see on the Prinsendam is our cruise director Thom getting ready to “swim” the canal. Properly attired with a Panamanian hat he took to the waters right in the middle of the canal. As he does not like Crocodiles, he did not go overboard but jumped in the ships pool.

Most of our Grand Voyage guests have been through the canal before and most interest was in the widening of the canal and the new locks already under construction near Mira Flores. It is the intention of the Panama Canal Authority that by 2014, the whole canal is two way (which means no convoy sailing needed any longer for passing through the Culebra Cut) and that much larger ships can transit the canal. Currently the maximum size (called Panamax ship) is 965 by 105 feet due to the size of the lock chambers. 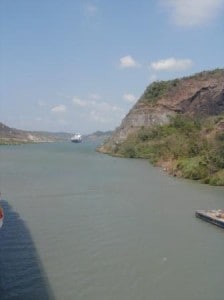 To give you an idea about how much wider the canal has become, compare the above picture with the one below taken in 1954. Here the Dalerdyk, a passenger cargo ship of Holland America transits the canal on its regular service to the west coast.

The below photo comes out of my collection and was first published by HAL in the 1950’s on a calender. The canal was very narrow but then the Dalerdyk, a regular sized cargo ship for those days was not very big either. 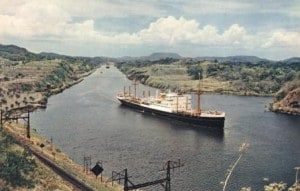 As the canal mostly goes through rocky area’s, especially near the continental divide, it is not just dredging but a lot of blowing up that goes on. When the rocks have been reduced to rubble, the rubble is either scooped away by drag lines when above water or by dredgers when under water. 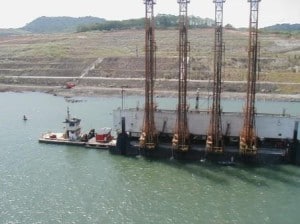 The canal company is using this strange contraption to blow up the rocky bottom of the canal. Drills make holes that are filled up with explosives and after the detonation the resulting rubble is removed and the process starts again.The same thing is being done on the shoreside and in the photo you can see the plastic pipes being used to hold the explosives

The new exit near the Pacific Ocean will partially follow an existing lake and some of the approaches have been dug already. In the mean time another initiative is going on to deal with container ships that are too big for the canal. The container terminal in Balboa is extended and made ready for ships up to 55 feet of draft. They can there unload their containers, these then go on a train across the Isthmus and are reloaded onto a container ship docked at the port of Manzanillo just south of Cristobal. That will save a considerable amount of time for a container to go from A to B, as it omits the whole voyage around South America or a cross country train ride through the United States. 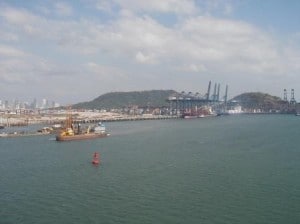 A spin off of the canal development. The old cargo docks in Balboa on the Pacific side of the canal have all been destroyed and are now replaced with big new container docks. 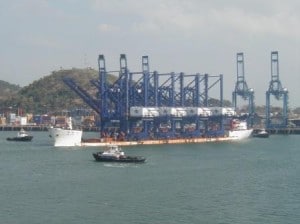 The new container cranes for the dock have just arrived by means of a specialized chinese cargo ship. As soon as the berth is free it will come alongside, deballast until its cargo deck is on the same level as the pier and then the cranes will be rolled into their tracks.

It was a very good day today and I think all the guests enjoyed it. Apart from that the guests could go ashore all night long, we also had a local folkloristic show onboard of 30 performers. Tomorrow we will be at anchor all day for our call at Fuerte Amador and it is going to be another very sunny and warm day.

Some other interesting shots: 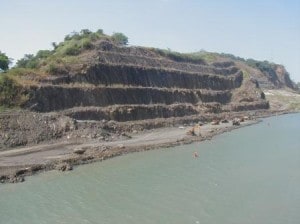 One of the major issues with the widening of the canal is to avoid avalanches or rock slides. To stop this the mountain edges are terraced to make sure that falling rubble will end up on the next terrace and not slide into the canal.The buoys on the left indicate where the edge of the canal was before the latest redevlopment started 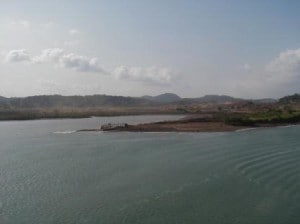 The entrance to the new locks. The new locks are still separated from the canal it’self until they are completed and then the last soil will be dredged away. On the foreground a remnant of an original spill chamber from 1914. 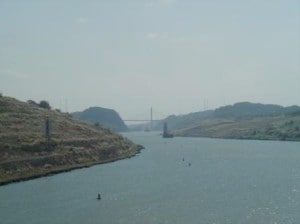 A view that was not possible a few years ago. Looking straight from the Gaillard Cut into the Celebra Cut with the Centenial Bridge in the back ground.