Today we continue our tour of the building and we are still on the 4th floor. Here we have Fleet Operations, Finance, Marketing and near to my office Logistics. The latter is the group that has to get items that the fleet orders to the ships.  With normal items such as vegetables, meat and let’s say toilet rolls that is not so complicated. There are vendor contracts and they take care of the delivery. It gets more complicated when the ship needs a one-off item that can only be obtained from one company that might be located in the depths of Idaho.  Of course the ship needs that item yesterday and then it has to be air freighted to a port where the ship will call at.  So for this group of people it is a daily puzzle to get those items where they have to go.  Even deciding whether to send an item to Juneau or to Skagway in Alaska is something to think about. Skagway does not have any easy road or air connection so an item would have to go to Juneau and then by ferry to Skagway. Then you have to know the ferry times, make sure that the agent picks it up and gets it to the ship in time. Juneau is much easier then but that does not make the ship happy as they wanted the item yesterday.  Things are not always as easy as it seems.

Fleet operations consists out of Nautical and Technical. Under each header there might be sub divisions, such as Newbuilding and Interior design.  Holland American and Seabourn are here mixed in to a certain extent as a lot of work gets done in a combined way.  Everything is overseen by a Sr. Vice President to whom reports a Vice President Nautical and a Vice President Technical. Then there is also a Vice President Compliance but that department is on the 5th Floor. But again it mixes in as the boundaries are not clear cut. I work for Nautical but at the moment I am sort of helping out Compliance by writing training power points for the new 3 alarm system. The roll out of that system is again a joint venture between Nautical and Compliance. 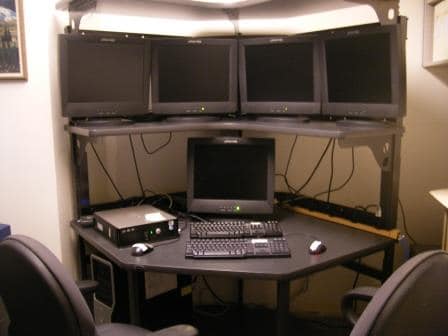 The similator gives the option to replay Radar, Electronic Chart and other Nautical Data

Staying with Nautical, there are a few things that make it possible to see that you are in the nautical world here. The most obvious one is that we have our own little Simulator. Very small and mainly meant to replay sequences from the Black Boxes on the ships in case that is needed.  If something has happened on a ship and the bridge was involved then there is the option to download the Black Box of that ship and replay the evolution in the office.

This also shows that technology advances. In the old days it was always hoped when the ship went down that the captain took the last logbook with him. Now the request is to pull out the hard drive from the Black Box back up in the Captain’s cabin. This in case that the Black Box pod, which is located on the top deck, does not float free and cannot be retrieved again. 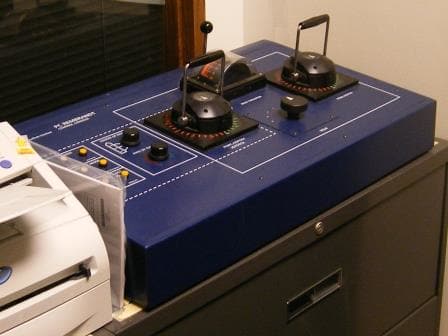 Next to it is a small maneuvering console. This came to Seattle when the first Azipod ships arrived, to give everybody the chance to do a bit of familiarization.

This is the Azipod line up for going ahead

When maneuvering the Pod can be turned 360o and the manufacturers advise that it is better to always use ahead thrust. So if you want to stop the ship, you turn the pod 180o and give ahead in the astern direction.  When going sideways, you do the same, one pod is pushing towards the dock and the other pod is kept ready to slow down the momentum by pushing ahead the other way. It is a very clever and flexible system but you have to think about the planned maneuver in different way. 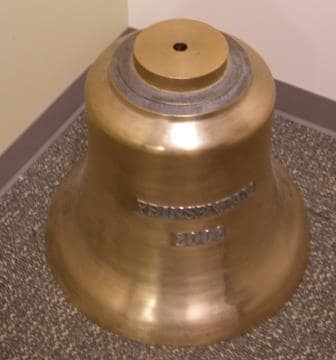 I showed in a previous blog the big bell of the Rotterdam V.  We have another big bell on the 4th floor. This was a bell that was meant for the Prinsendam in 2002 when it transferred to the HAL fleet from Seabourn. However it turned out that one had already been installed and thus it came as decoration to Seattle and is now standing in one of the conference rooms of the finance department.

One final thing that really appealed to my sense of humor is that visitors are warned about the fact that we are really working here. Warning signs are deployed in the corridors accordingly. 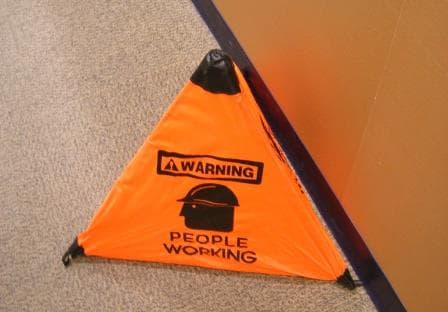