Today a small intermezzo before we continue our tour of the office. I have been asked by one of the blog readers about the flag that a ship flies from the bow. It seems that every company does something different.  And that is indeed true and most of it is steeped in tradition and history.

Flying flag is something that comes to us out of the grey mists of time. In the very ancient days flags were flown to ward off evil spirits or to create fear in the hearts of the enemy.  A more common reason was to make sure that you could recognize each other. In war time it helped prevent shooting at each other, as most warships looked quite alike or it helped to recognize who, was who, when sailing along at sea and when entering port.  This was accomplished by Nationality flags, Company flags and Signal flags. (And also somewhere in the past some clever clog came up with the idea to string all those signal flags together for celebration reasons, hence we now see ships with dressing flags, on high days, holidays and change over days)

To make sure there was some system to the madness, countries issued regulations of how and when to fly flags and what sort of flags were allowed. Secret code books appeared both for warfare as well as in civilian life. Also Holland America had code books for Signals and later for wireless so that communications could take place without the competition knowing what was going on. The latter persisted into the 1960’s but then it was mainly to cut costs. A digit code could signify a whole standard sentence and instead of paying for 100 letters, you paid for six digits. I remember one 699999 (mainly because of the 9’s) in one of those old books and that meant: the mail will arrive on Monday.

Standard for all ships is that the Nations flag is being flown from the stern or fantail. That is not necessarily the home country of the company, but the country of registration, or the Flag State. Holland America is now an American based company but its ships are registered in the Netherlands and so we fly the Dutch flag.  Seabourn is also an American based company but flies the flag of the Bahamas.

Then there are flags flown from the ships mast. In the old days that could be from several masts but the mast mostly used was the one located the closest behind the bridge. (It meant that the officers and sailors could respond quickly to incoming signals) With the modern ships this mast is now located on the top deck and in some cases can hardly be called a mast anymore. It is more a lattice work brimming with antennas and other electronic gadgets. Sometimes even obscuring the flags.

On that mast, we have right (starboard) side the Flag of the country that the ship is visiting. Centre is the Flag of Registration, flown there when the ship is at anchor or from one hour before departure to one hour after arrival when in port. In between when docked in port, the flag is flown from the stern again. On the left (port) side is the company flag.  Sometimes there is an extra flag, such as a red one (loading fuel) or a white and blue one (diver down).

Then we come to the bow and here things start to differ.  On Dutch ships we have a small Dutch flag there, called a “Jack” in English or “Geusje” in Dutch. That Dutch name refers to the Geuzen, which were Dutch freedom fighters in the 16th Century when Holland had an 80 year argument with Spain. The end result was that Spain was kicked out of Holland. These Geuzen were mainly coming from a merchant marine background, as the Dutch did not have a real navy but used heavily armed merchant sailing ships. Later when the country was fully established a regular Royal Navy came into being. So the first flag regulations came from those days and that tradition has remained the same ever since. 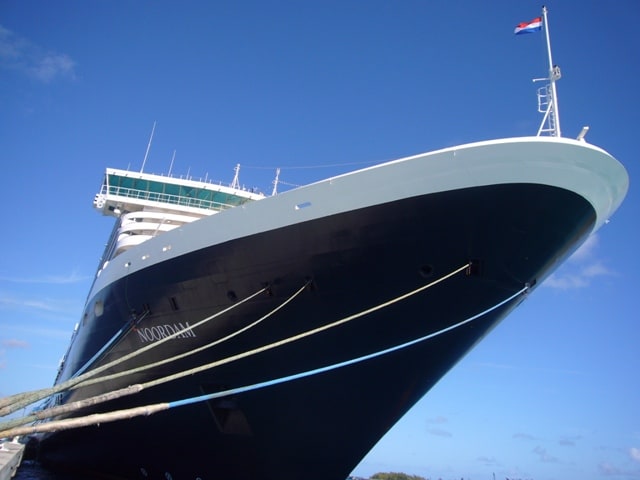 The “geusje” on the bow of the ms Noordam

Other countries had a different approach and that is why we see with British Merchant Marine companies such as Cunard and P&O that the company flag is flown at the bow and that only the Royal Navy uses the Nations Flag at the bow, in one form or the other.   Newer company’s such as Princess, Royal Caribbean and Carnival have followed that example, mainly I think because they are registered in the Bahama’s which was once part of the British Empire and thus follows English Traditions.

So hopefully when you see a Dutch registered ship, you will see a Dutch flag on the bow. If not then either something went wrong, or somebody on board did not know the correct protocol.