Today we are in Ketchikan and this is the Ketchikan I recognize. Drizzle, Rain and Swirling Clouds around the mountains high above the town.  The Westerdam arrived early as we had to drop off a container, and instead of going alongside the berth and getting a flatbed truck onto the dock with a big crane, the ship sailed to the Ketchikan Shipyard and went briefly alongside the fitting out pier and the shipyard crane hoisted the container ashore. And then the captain just sailed the ship astern (backwards) to our regular dock. By 05.30 we were all fast and all the hard workers went back to bed. Sailing a mile or so from the ship yard to the dock with wind and current can be a challenge but Azi-pods ships have so much power that it is not really a challenge. Azi-pod ships are often better in sailing astern than in sailing forward as pulling the ship is often easier than pushing it. 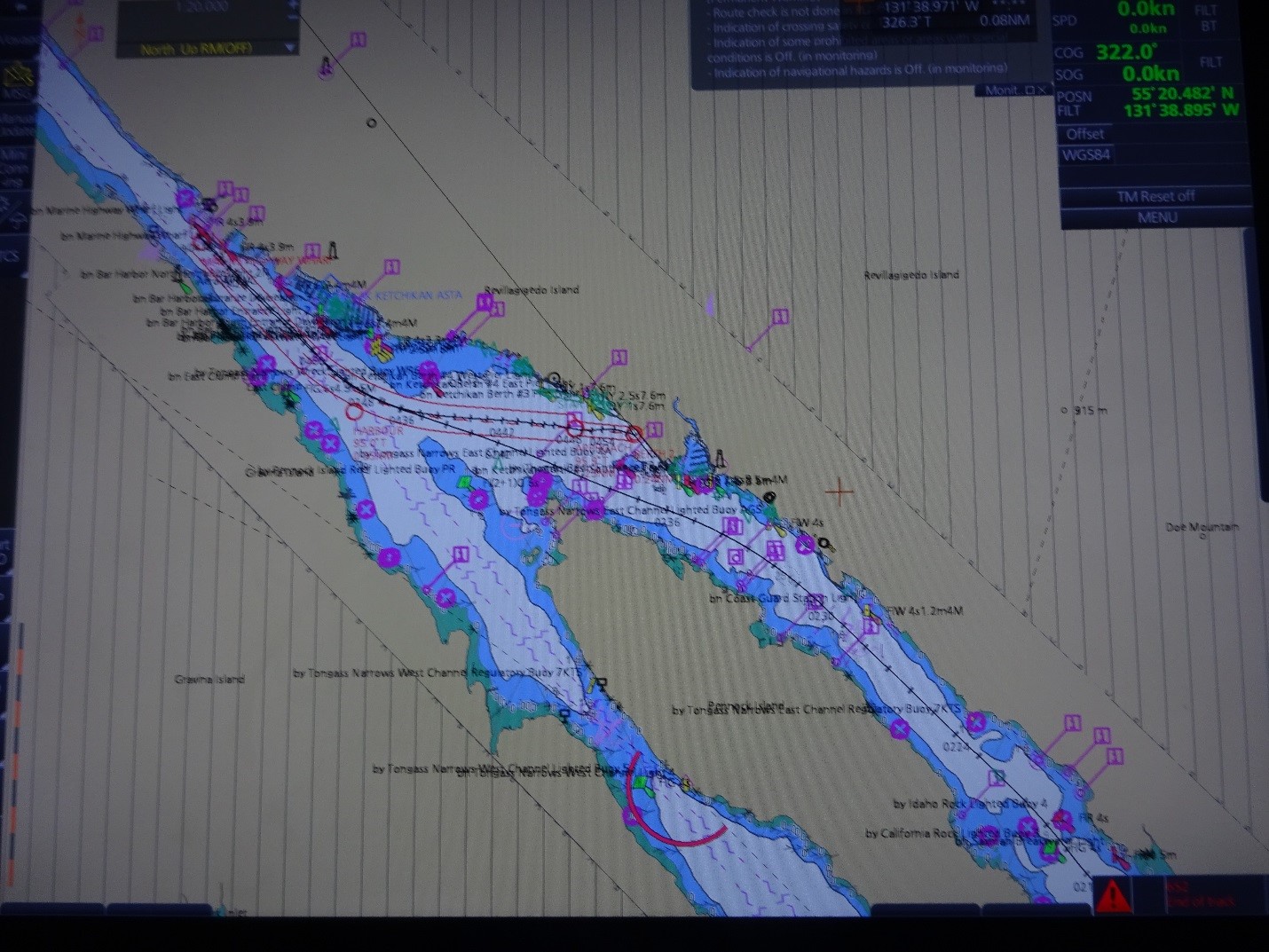 The route to the shipyard and back. It looks like a rail road track and that is about the way we sail nowadays. The track in voyage plans is pre planned and we just sail along it. The magenta boxes on the electronic chart provide more information about were you are, when you click on them.

We are in the port with 3 other cruise ships and two of them are signaling the next step in cruising. The other normal ship is the Star Princess which does it’s regular Alaska rotation same as we do. But today we also had in port the Seabourn Sojourn and the Silver Explorer (Silver Seas cruises). These are both luxury ships that are edging towards exploration cruises. The Silver Explorer more so than the Sojourn, but Seabourn is compensating for that by having two real explorer ships on order. The first one the Seabourn Venture will join the fleet in 2021 at the same time as our new Ryndam. 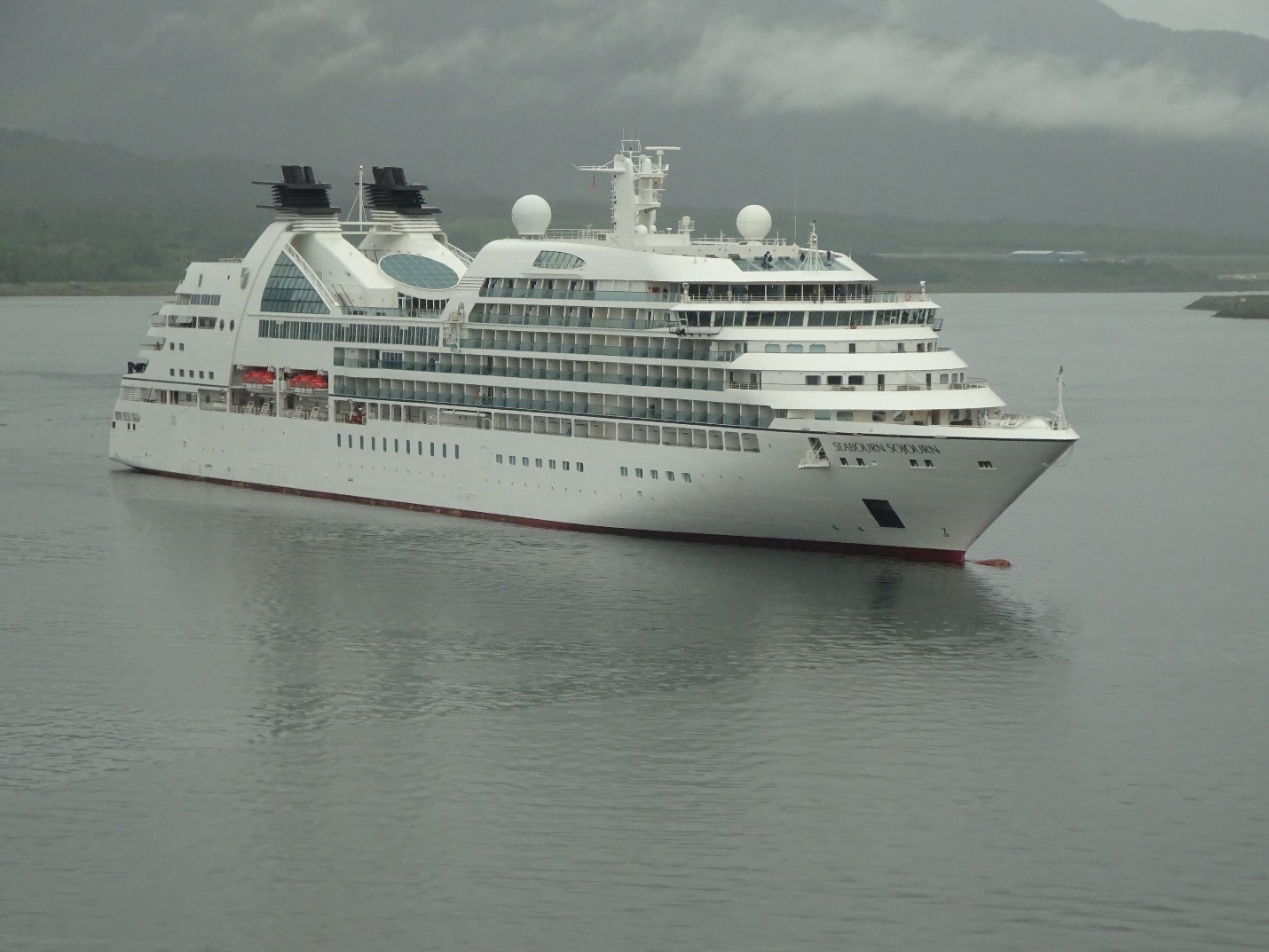 The Seabourn Sojourn approaching the dock in Ketchikan early this morning. She is one of the 5 ships of  Seabourn with two more coming.

In the old days, and they are still out there, expedition cruises meant spartan cabins and woolen socks and hats and going ashore with backpack and binoculars to look at the flat feet warbler in his natural habitat. It was limited to a certain group of travelers. But with environmental themed cruises becoming more main stream, the ships are developing with it. And thus the luxury segment is now descending upon Alaska and other places in the world to cater for those who want to go there but not in “austere” conditions. Whatever luxury these guests were expecting today I do not know but the rain was the same for everybody and so were the souvenir shops.  Although some of the latter did sell very luxurious stuff. I think everybody will know which shops I mean.

Yesterday under the chartlet of Seymour Narrows I mentioned Ripple Rock with the promise to come back to this. Seymour Narrows is already dangerous enough as it is but before ………. it was even worse, as right in the swirling middle of the small passage, there was a pinnacle rock with two tops sticking up to just under the surface. One was just 9 feet under the water line at low water. 9 feet was not much even for the smaller ships of those days. Over a 100 ships and more than 110 people perished and died because the current carried them onto these pinnacles, even when going through at the best of tides. Sailing ships in those days were not as maneuverable as our modern ships, so if there was an un-expected change in the current, disaster would be near. 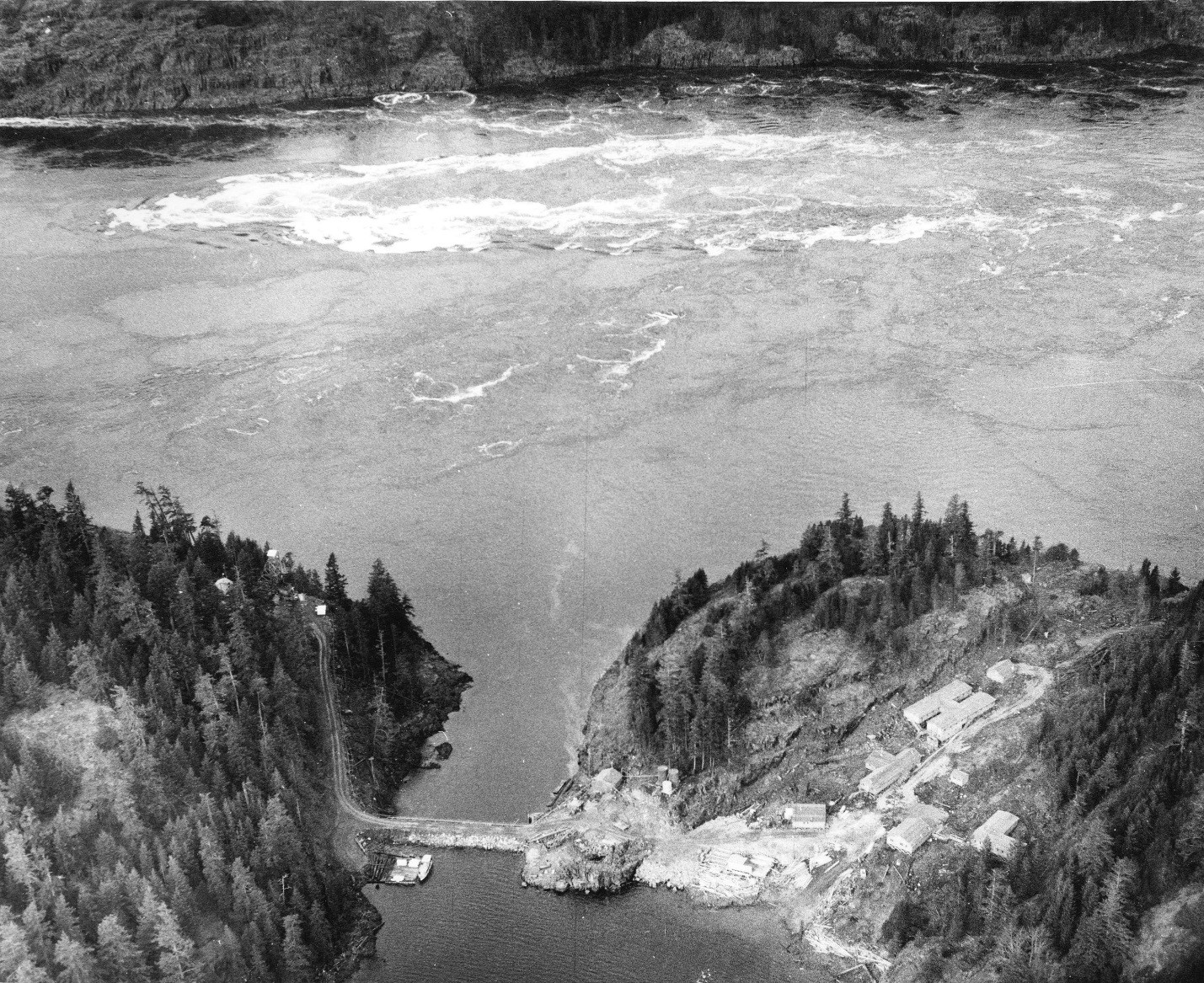 Ripple Rock before it was blasted out.  This photo was taken when the current was running, but even at slack tide when the current is supposed to be zero but never really is, it did not leave much space to sail through. If the Rock would still have been there by the time that Alaska Cruise Tourism really took off, the 7 day cruise to Alaska would never have been popular as they are today as the ships would have to go around Vancouver Island. (Photo courtesy Vancouver Archives and a big thank you)

This in 1958 the Canadian Government decided to solve this issue for once and for all by blowing up the whole rock. Between 1955 and 1958 miners dug a tunnel under the rock structure and packed over 1200 tons of explosives in it. When they blew the whole thing up the minimum depth went from 9 feet to 45 feet at low water and all the ships of that time and most of the current day ships can now sail through at lowest low water slack tide. In 1958 this explosion was considered the largest non-nuclear explosion ever created by mankind. In later years the Russians and Chinese seem to have created bigger bangs but they were not under water.

When I came to Alaska in 1982 for the first time I still had the privilege to meet a few of the old timers who were there as young deck hands or not so old captains who later became pilots. I mentioned that in the early days the BC pilots were not always the most communicative towards a young officer but we had one pilot: Captain Wodzianek (I hope that I have the spelling right) who was much more open. His colleagues called him “The Teacher” and he told stories and experiences from Ripple Rock as it was. I never forget one thing he said about passing through here: It is good to have your skills in that hole, but it is better to have been to church last Sunday, if you wanted to make to through there.  But he also taught us how he navigated. No Radar, no nothing. Everything in the line of sight. Trees in line with mountains and rocks. Rocks in line with other rocks, clocking the current on his watch and then changing course at the right moment etc. etc. skills of the old days which are not used anymore. As everything is now by radar and electronic chart.

Tomorrow we are in Juneau, which is supposed to be the busiest day of the year; at least for the number of ships in port on the same day. I do not think it will appertain to the number of guests as some are smaller ships.

Weather for Juneau: Overcast with a small chance of showers in the morning and then 60% of the same in the afternoon. Luckily as there will be no wind, the temperatures will be pleasant: 60oF / 20oC.