So the weather guru’s has promised me south winds 5 to 10 knots. And what did I see when I arrived on the bridge at 05.15; 25 knots gusting to 30 knots. At least they had the direction right. Which is not that difficult as it can only blow from two directions here. North or South.  But it did not make me a very happy camper as the Broadway dock, where we are scheduled to go to, is fully exposed to that wind and you have to move against it. It gives no issues for the Railroad dock as it is protected by the mountain; it gives no issues for the Ore dock, as you just land with a controlled drift but it gives issues for Broadway dock. The wind pushes you away from that dock and then you drift directly onto the Ore dock on the other side. With only 200 feet of space between those two docks, that is not much, even if you have tugboats to help you. You’re only hope is, a. that the wind has the right angle and is more on the stern than on the side, b. that it is a consistent wind so you can find a balance with powering against the drift and c. that the wind is not too strong as you have to slow down as well, when entering the u-shaped berth area.  The only way to find out is to go there and see what it looks like right on the spot.

Ahead of us was the Grand Princess who was docking at the end of the railroad dock and for her only the stern was sticking out but she needed all her power to get alongside until she was out of the wind. That gave me an idea what I was going to get myself into, with no shelter at all.  Thus you go through all your options: a. is there a tugboat to help me. Yes, so get it out.  B. If I cannot make it, can I get out safely; Yes, if I put the brakes on timely, I can drift to the West and stay clear of the end dolphin of the Ore dock. 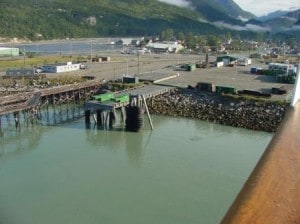 As you can see there is not that much room at the Ore dock (furtherest dock on the left) when coming in. Photo taken on better days.

So we put the tugboat on the portside and started the approach. Almost at once we started to drift with over 30 knots full on the funnel. Tugboat and thrusters could not hold against the wind and at the same time that wind started to push the ship quite fast forward towards that Ore dock where I did not want to be.  Thus plan b. was exercised.

Putting the brakes; until drifting clear and then spinning around getting the nose into the wind. In the mean time the wind velocity kept climbing. While I was sitting there, completing my next move, it gusted up to over 42 knots. That is Wind force 9. I could not dock at the ore dock as that had been reserved for another ship and could not get into the Broadway dock without gambling on the wind and drift. As a captain you do not gamble, so what to do?  Time for Plan C.

Plan C, when the wind is from the south it is possible to dock at Haines. Haines is tucked away in the corner of a bay, off the Lynn Canal and is sheltered from the winds from the south. It will get some but if it blows 50 knots in Lynn Canal, then it blows 25 knots max. at the dock in Haines and most of the time less. Plus if you get blown off the dock in Haines, you are blown into deeper water and that is always a good feeling. After the agent confirmed that the dock was available and our head office had given permission, we sailed the 13 miles down to Haines via the Lynn Canal. By 09.00 we were docked, still in gusting winds but not as bad as in Skagway. 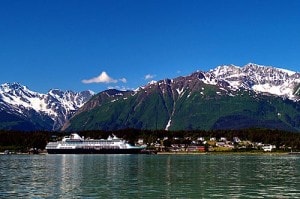 Picture postcard Haines as taken from the local ferry.

One advantage Haines had over Skagway today; the sun shone all day long. With that sun glistening on the mountains it was picture perfect Alaska post card weather. Those who had hoped to go shopping where disappointed, those who wanted to see an authentic Alaskan village were delighted.  Haines gets one or two cruise ships a week, so the chance that an enormous Tourist Trade/shopping centre will pop up here overnight is rather small.

I hoped they opened up the Hammer Museum in the afternoon but I know that the Bars were, as I saw the lights popping on in mid afternoon.

So we had a quiet and peaceful, sunny day in Haines. I stayed until 10 pm. to make up for the late arrival and that must have been appreciated by the guests as the last ones came back on board only shortly before departure.  Tomorrow we are in Glacier Bay. The weather guru’s are again predicting South winds 10 to 15 knots. We will see. Here it is less of an issue as we do not have to dock. The only challenge with strong south winds is that it pushes the ice against Marjorie Glacier so I will not be able to get that close as the ice field thickens, but still spreads wide as the glacier keeps calving.