It is not summer yet. Today it rained and it was windy and chilly. The locals call this weather Mavember. It should be May and spring like but the weather is providing a November day. And it is un-predictable. The ms Zaandam came down the river as scheduled and went under the bridge at 04.00 hrs. to ensure that the gap between radar mast and bridge was enough so there would be no “boiiing” when passing. And once past, the wind picked up from 15 knots to almost 30 and then with the current flowing strongly as well, docking becomes a complicated procedure. That wind was not expected as the weather was supposed to be stable all morning. For the afternoon, we had three weather forecasts with different opinions about the direction of the wind and the amount of rain. They did agree on the temperature.

With the wind picking up 2 tugboats were called out to gently push the ship against the wind towards the dock, while the captain used the bow and stern thruster to keep the ship in balance against the current and to ensure a soft landing. (Tugboat captains can be enthusiastic in their pushing activities and pilots are sometimes a little bit late in telling them to ease off on the power and then you can get a bumpy landing. So it works best to let the tugboats push with a constant speed and use the thrusters to brake a little or to enhance the speed a little bit if needed.  We stayed all day in Quebec and hopefully the city worked it charms on our guests on a rainy day as well. Quebec is the port of call with the highest HAL guest rating of all ports in the world but today it needed all its charm to reach a good rating again. 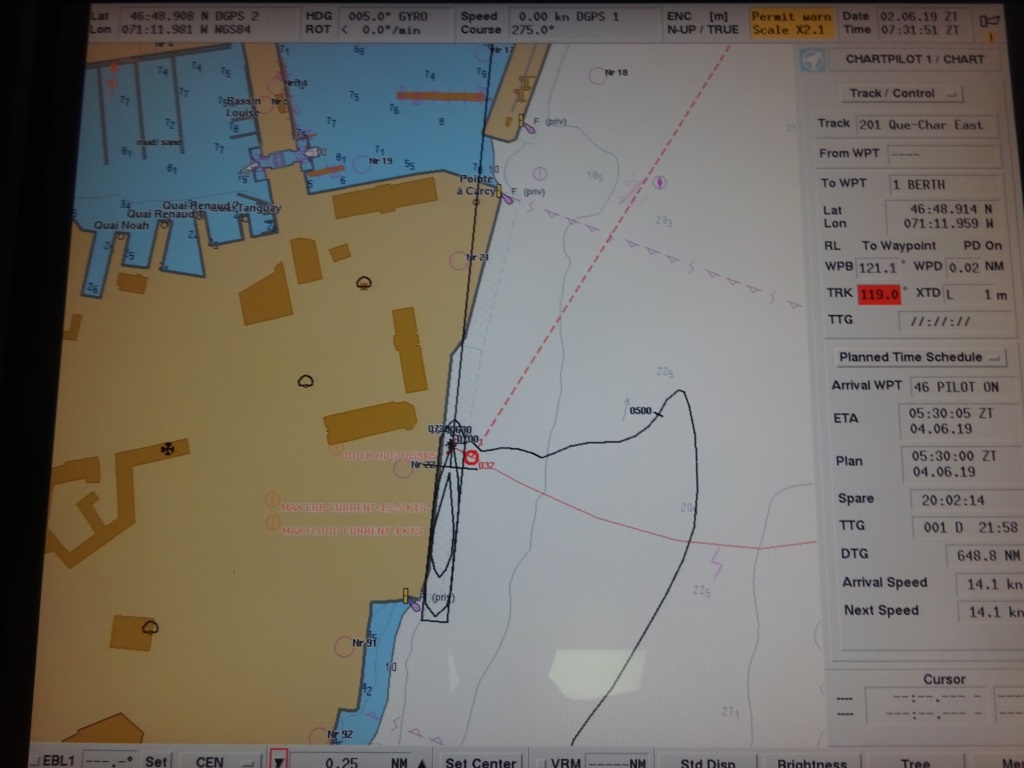 The safest maneuver. when there is a lot of wind and a lot of current. Stop in the middle of the river and go sideways. all the time keeping the ship in balance with the elements. If the ship gets under an angle with the current or the wind, then it will get a drift which is hard to control. As long as the current is only pushing the ship up or down river then it can be controlled with the main engines.

With the strong current going docking in these ports along the river creates all sorts of challenges. When the ship comes into position it has to stay there to bring out the mooring lines. With 4 to 5 knots of current pushing against it, it does not want to stay in position but drift away with the current. And thus the engines have to counter act the current and that gives the strange situation that the ships propulsion is on 4 knots ahead (or astern, depending on the direction of the tide) while the ship is not moving at all. Then take into consideration that the gangway only has a few inches of flexibility for sliding sideways in the gangway break of the ship and it is easy to understand that keeping the ship in position with the lines and then easing off on the engines without movement is challenging. Once docked there is the 2nd challenge of adjusting the ropes for the water level, which changes with the flooding and the ebbing. Quebec might be a few 100 miles inland, but the ebb and flood of the ocean reaches all the way to Quebec and even a few miles past it. In the past it was even more complicated as the shore gangway could not move at all. That went wrong last year with a ship and thus they had to repair this shore gangway in time before this season started. Luckily the engineers realized that a certain amount of flexibility with the gangway might make it last longer and thus it can now move a few inches sideways in case the ship moves a little bit. 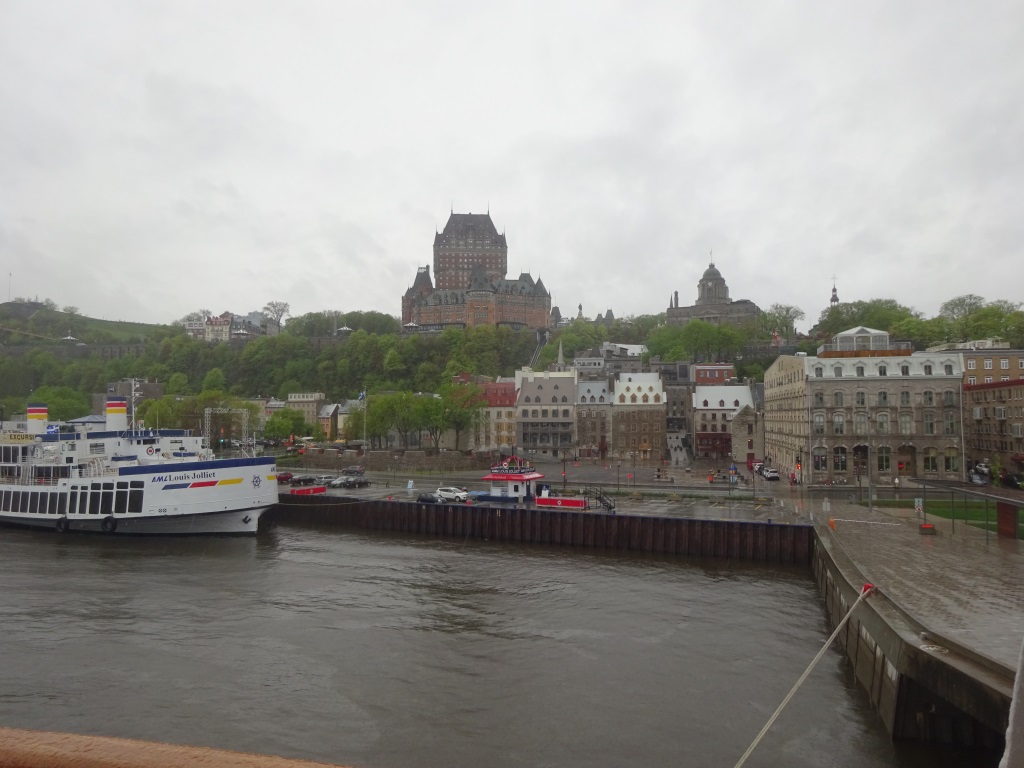 Chateau Frontenac, the major hotel in Quebec which dominates the skyline on the river, as seen on a rainy day.

This is an unusual ship’s visit for me as it is only 14 days instead of three weeks and secondly I am not alone this time. Only 14 days because yours truly has to fly back to Europe in time to join the Prinsendam for its final voyage. So you will get a daily account of a 14 day Norway cruise and the final days of our Elegant Explorer with HAL. As is now well-known on 1 July 2019 she will be handed over to the German company Phoenix Reisen and will be renamed in ms Amera for the German cruise market.

My visit here is also unusual because I am accompanied by Captain Colm Ryan (see biography on the blog site) who was formerly the captain on the ms Veendam. Now he will be the 2nd Fleet Master in Holland America as I cannot handle a 20 ship fleet (Hal and Seabourn) by myself. So he will understudy for a period and then we can divide the fleet in two, to provide a more frequent service to the ships.

We will now start our journey back to the sea, and close to midnight tonight we will disembark the pilot at Escomins, which is the end of the compulsory pilotage on the St. Lawrence River. From there the river is deemed wide enough for ship to sail without a pilot. Then tomorrow we will be at sea. First in the wide estuary of the St. Lawrence, and then in the open waters of the North Atlantic Ocean. The day after tomorrow we are in Charlottetown, Prince Edward Island which is 600 miles down river and to the east of Quebec.

At the moment the weather forecast does not look that great and we might have rain, wind and swell to contend with. It is going to be interesting in the coming days, Very unsettled weather and nobody knows which way it will go.