Haines is an early morning arrival because the first tours are leaving at 06.30. Thus we approach around 05.30 a protrusion sticking out from the western shore into the middle of Lynn Canal, called Battery Point. The name comes from the fact that in the 2nd world war, guns were placed there to protect the area from a possible Japanese invasion. Haines was an army town and that is still visible with a whole series of large houses all more or less standard in design, overlooking the cruise berth.  The Japanese never came; the army is long gone but the name Battery Point is still there. From this point it is a sharp turn to port and then three miles to the dock.  We had a very strong southerly wind blowing up the Lynn Canal and that makes Haines a very nice port as it is completely sheltered from southerly winds. So it can blow 40 knots in Lynn Canal and in Haines itself there is not much more than a gentle breeze.  Fine for me as it makes docking so much easier. In the winter there can be very strong northerly winds coming down from Skagway and then Haines is a windy place as well. Today we had a gentle but nippy breeze curving around the mountain but in the afternoon it died down to wind still. The rain stayed away and that was perfect for our flag raising ceremony for the Pilipino Independence day.

Officially Independence Day is on the 12th of June but we could not do anything that day as we were in Glacier Bay and then everything is focused on the call there. So I postponed it to today which had the added advantage of being able to do everything on the dock side. Flag Raising and tug of war.  The history of the Philippines is a bit muddled. They declared independence on 12 June 1898 when the USA won the war against Spain. But instead of gaining independence, Spain sold the Philippines to the USA and then it took until 1946 before Independence became a reality.  Still 1898 is counted as the starting year and thus this year marks the 114th year of independence celebration.

By 10.00 all the crew that could be excused were assembled on the dock side, where our portable flag mast had been rigged up and an amplifier set was ready to play the National Anthem.  There was the obligatory speech from the chairman of the Pilipino Community, one by the Captain, the flag went up, everything according to plan. There are close to 500,000 Filipino’s working at sea and it is interesting to think about the fact that on most ships such a flag raising ceremony takes place. Maybe not with so much pomp and circumstance as on the HAL ships but in one form or the other something will happen.

A sailor putting everything into it that he has, and yes then you win.

Most crew are however interested in the Fun and Games after the official ceremony.  Standard item on the program is the tug of war between the various departments. In the past it was always normal that the engineers won the tug of war but as fitness is also becoming a point of interest to the Indonesians, they are building up muscles and things are changing.  That was shown today by the fact that the sailors won all the heats and thus also the finals. Engineers came second and housekeeping came 3rd. What was missing today was a Ladies team, neither shops, nor casino or Beauty Salon or Entertainment were interested. A few years ago, we had a team from the retail outlets on board who all showed up on high heels. Great laughter all around until they started the pull. It turned out that the Stiletto spikes were ideal to dig into the soft ground upon which the tournament was held. The other team could pull and pull but the Ladies simply did not move.  I had never seen that before and I have never seen that again.

As soon as the last tour was back on board by 20.30 we pulled out from the dock and joined in with the southbound convoy coming down from Haines. We were all going slowly, as some go to Glacier Bay, some to Hoonah across from Glacier Bay and some, like us to Juneau which is also just around the corner.

I have set arrival for 06.00 alongside so we are in the port first and not delayed by the other ships. Some of my colleague captains from other companies are quite creative with changing their arrival times to suit themselves and I do not like the hassle of inventing the “arrival” wheel every cruise. So I get in every cruise at the same time, ahead of everybody else and am out of the way when the rest comes in.

The weather for tomorrow does not look that good. Rain but no wind. The latter is good for me but it means most of the time low hanging clouds in Gastineau Channel and that might affect the shore excursions.

Another beauty shot of Glacier Bay, the other side of Tarr inlett where there are no glaciers. By Hotelmanager Bert van Mackelenbergh. 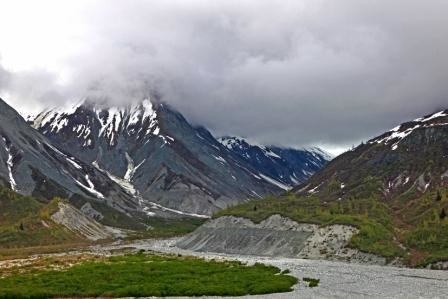