As mentioned before, Glacier Bay has its own micro climate and that showed today. Over the mountains in the south the rain clouds were still lingering, but the further up we came into the bay, the brightness increased and by the time we were at the glaciers the sun was brightly shining. For the first time this season we could see Marjorie Glacier all the way up the mountain and when we sailed down the bay again it was the same for the Lamplugh glacier. This glacier comes down under a more gradual slope but far above it is a sheer vertical cliff which is very imposing when the sun shines on it in the afternoon. Although there was too much ice to get close to Lamplugh, I stopped a mile off for a few minutes to give the guests the chance to see this impressive sight. So we enjoyed a very nice day from the beginning to the end with hopefully many more to come.

The routine for Glacier Bay is very well regulated in a program that has grown into a documented routine, based on years of doing it the same way and finding out what really worked. Most of it is courtesy of the experiences that the Rangers had on the HAL ships since the 1970’s. It is now stipulated in a required/strongly suggested program. Understandable from their side, so when a new ship or new company enters Glacier Bay, the wheel does not have to be re-invented.

A fairly recent addition is that the Rangers now also provide a children’s program for Club Hal which is run separately from the Adult program. The routine for our call today: 10.00 boarding, meet and greet with the Captain and the review of the cruise up/down the Bay. 10.30 opening of Rangers Stand in the crow nest and time to talk to the Rangers and the Huna Cultural Interpreter. 11.00 Presentation in the show lounge; Wonders of Glacier Bay. 12.00 Start of outside deck narration by Rangers as we enter the upper Bay. 14.00 – 1500 floating in front of Marjorie Glacier, see the ice calve. 15.45 – 16.00 Sail by Lamplugh Glacier. 16.30 Presentation in the show lounge; Alaska Native Culture 19.30 disembarking, after the day’s review with the Captain. During the day, the ships own operation continues but on a low key, so that all the focus can be on Glacier Bay. One Ranger spends all day in the crow’s nest with a courtesy table and bookstand and the other Ranger is most of the time on the Bridge for the narration.

Watching out and recording all animal life in Glacier Bay.

Then there is one more Ranger on the bow and that is the wildlife spotter. In all winds and weather he is there for the whole duration of the cruise up and down the bay. Today it was more pleasant for him as the sun was shining and the temperature, although still cold, more bearable. A ship provides a perfect platform for wild life spotting and the Holland America Line ships with their forward observation deck is a perfect place to do so.

My job is of course to get the ship safely in and out of Glacier Bay. Keeping a close eye on the pilot while we are on the move as it is a requirement that the pilot “cons” the ship while we are sailing. Then there is maneuvering through the ice floes while off the glacier. That is done by yours truly himself. We try to do that in such a way that we have the least impact on the environment. Handling the speed very gently so there are no emissions. Before the season starts all our engines get fine tuned to reduce emissions to the absolute minimum and while maneuvering I handle the controls as gently as possible, so no plumes of smoke are created. On my maneuvering console I have an extra monitor with a real time read out of the engine load and the smoke readings at all times. 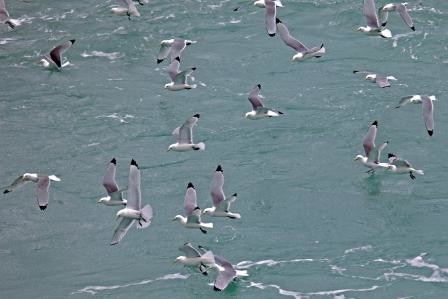 The only thing I cannot prevent is that the birds are having a great time because of me spinning the ship around. The water is full of sediment coming from the glacier and when the water is un-disturbed this sediment floats about a foot under the surface. When I spin the ship around on the thrusters, that sediment is churned up to the surface and results in a feeding frenzy by the small sea gulls that nest near the glacier.

Tonight we are sailing at slow speed around the Mountain range that separates Glacier Bay from the Lynn Canal. If there was a gap in the mountain range then we could get to Haines in about 2 hours, now it takes all night sailing in the Lynn Canal. Tomorrow we will be in Haines. The weather forecast calls for a windy day, but from the south, so it will be quiet in Haines as it is sheltered by high mountains from that side. Maybe a bit of rain later.

I hope for dry weather in the morning, as we are celebrating Pilipino Independence day with a flag raising ceremony and a tug of war. The official date is today but we cannot combine that with the Glacier Bay experience.