The sun arose late over the Prinsendam, as was expected due to the time change, but all was well in the world. The wind had lessened off even more during the night but did not achieve the near wind still status as predicted by the weather forecast. We had still a wind force four to five blowing but by now it was a mostly following wind. That only helped by creating nearly wind still conditions on the deck as it balanced out the wind flow caused by the ships speed. With only a few clouds in the sky, it became a sunny day and that will remain so for the rest of the day.  Also for tomorrow in Fort Lauderdale the weather forecast is good with regular warm Florida weather.  It makes for a nice and good ending to this Grand voyage of 62 days.

This last sea day is the wrapping up day of the cruise.  The morning was dominated by the disembarkation talk: “please do not pack your passport and please do put your luggage tags on.” (Especially with over 700 same looking Grand Voyage bags, which all have the same red color). This was followed by the Goodbye from the crew in the Show lounge.  The number of crew attending on the stage various from cruise to cruise; but as a rule of thumb, the longer the cruise is, the more crew pops up. Today the turnout was so large that crew spilled over from the stage. 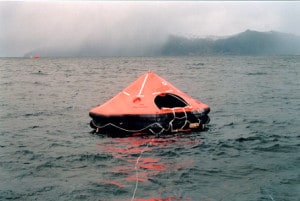 This is where an open life raft belongs in the sea not on the stage.

It did not help either that the cabin stewards all brought their vacuum cleaners. The cruise director always asks the crew to bring a special tool that signifies their job and hence we had suddenly 10 vacuum cleaners on the stage. Good plans do not always work out as intended. Sometime in the past, there was an occasion when the deck department brought a complete life raft onto the stage, still in its white canister. However, somebody of the crew must have paid good attention during the life raft trainings and pulled, exactly in accordance with protocol, the painter line. This caused the raft to inflate on the stage. Unfortunately there was whole row of kitchen staff just marching in front of it to take their assigned position.  These guys were launched by the quickly expanding life raft straight into the audience.  For the guests it was a wonderful show, for the chief officer not a happy moment, as they had to deflate the (training) life raft and repack it on the spot.

This crew gathering is the only meeting with guests that I refuse to attend.  This is the moment when the crew should be in the spotlight and nothing should distract from that, especially not the captain.  So if all the navigators want to attend, then I take the watch and man the bridge.  Today we had a great turn out and the whole bridge team was present, including the Security Officer, who proudly showed off his hand cuffs.  Maybe not a very conspicuous tool; but with all those vacuum cleaners on the stage, space was a scarce commodity and hand cuffs did at least not take up much space.

The one unhappy man on this ship today is our Chief Housekeeper. Mr Katon and his staff have the challenging task to collect close to 3,000 pieces of luggage. Store it group by group, in line with the un-loading sequence and they have to do that while the luggage trickles in without any logic to it.  Luggage collection started today at noon time and will continue until deep in the night. As mentioned yesterday, the special challenge is all these red trolleys that we gave out as a Grand Voyage gift. We all hope and pray that the guests have all labeled them correctly, as otherwise we will be in for a spot of bother in the terminal tomorrow.

Apart from that there is the crew luggage, which also has to be offloaded.  Crew will collect their luggage in the terminal as well and then present it to the Custom and Border Protection Officials for clearance. In the past the crew often had enormous quantities of luggage.  We used to call them cartonites. (a la Samsonites but then from carton) These used to be of the exact maximum size allowed by the air lines and would contain everything you could imagine.  Since the airlines have clamped down on excess luggage, the cartonites have disappeared but each crewmember still goes home with at least two suitcases.  Our American crew quite often with more, as they can drop their surplus off at FedEx or DHL.

With the nice weather of today and the steady ship, packing should not be much of a physical challenge. More of a mental exercise, because: HOW DO YOU GET THE CONTENTS OF FIVE SUITCASES OFF THE SHIP IF YOU ONLY BROUGHT THREE……………………AND WHERE DOES THAT CARPET FROM TURKEY GO………..